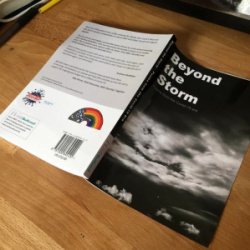 How to sum up a year like no other? It seemed to start innocuously enough. The usual events on the poetry calendar came and went in January and February – British-Trinidadian poet Roger Robinson won the TS Eliot prize to much acclaim, Mary Jean Chan won the Costa poetry award, the always-crowded Poetry Book Fair returned to London’s Conway Hall. Then came that Covid announcement on Monday teatime in the middle of March. Within ninety minutes of the news Write Out Loud’s technical mastermind Paul Emberson had swept the suddenly redundant Gig Guide from our home page, and redesigned it to accommodate more news stories instead, as the poetry world faced up to the prospect of no more live nights for the foreseeable.

Now what? Sarah Pritchard, co-ordinator of Write Out Loud Sale, was probably the first poetry organiser to adapt, staging a virtual open-mic night in the north-west on this new thing called Zoom the following night. It went well. 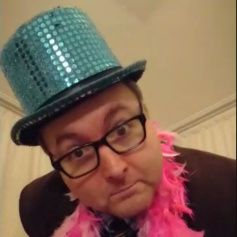 Others quickly followed Sarah. Devon-based performance poet Robert Garnham, pictured, launched Big Poetry Goes Viral on Facebook. Performance poet Luke Wright achieved a marathon feat of delivering his poetry via Twitter for 100 consecutive nights, asking only that viewers consider donating something in his ‘poetry cap’. Meanwhile poets wasted no time in putting down their thoughts about these times. A Facebook group set up by activist poet Janine Booth rapidly produced an anthology gathered from poems posted in just its first week; former poet laureate Carol Ann Duffy set up a Covid poetry archive with the help of Manchester Poetry Library which is still open for contributions; and veteran performance poet Nick Toczek began writing a Covid poem a day in mid-March, a task on which he is still engaged.

A poem by Michael Rosen, ‘These are the Hands’,  that was the title poem of a timely new poetry anthology about the NHS, was read on BBC Radio 4’s Today programme, at the same time as the poet himself was in hospital with suspected coronavirus. He remained in intensive care for 47 days, and is still suffering some long-term effects.

And at this point – amid stories about exhausted health workers, and a beleaguered NHS - we at Write Out Loud decided it was time for us and all our readers to do our bit. Or rather, our founder, Julian Jordon, did, at a time when his own cancer treatment was delayed by the pandemic. Instead of spending his time worrying about the delay in his treatment, Julian discussed with his Write Out Loud colleagues how they might respond to the national crisis. As he explained: “We know how therapeutic poetry can be, and we know how to run poetry competitions.” 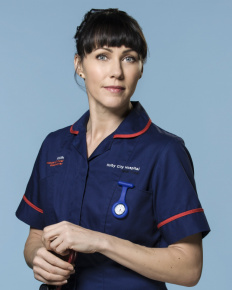 It was a bigger competition than Write Out Loud had ever run before – bringing in 2,300 entries – so we recruited a team of volunteer helpers. Multi-award-winning poet Andrew McMillan agreed to act as judge, waiving his fee. And BBC Casualty actors Olivia D’Lima, Gabriella Leon and Kirsty Mitchell, pictured, agreed to read poems on videos which have been posted to the Write Out Loud website. There was even a ‘people’s vote’ on the judge’s top six picks, based on videos of the poems read by the BBC cast and up-and-coming actors Jacob Butler, Rhiannon Clements and Noah Olaoye from ALRA (Academy of Live and Recorded Arts).

The competition and anthology was called Beyond the Storm, using a logo designed by Julian’s young grandson Oscar. Andrew McMillan describes it as “a historical record of what we collectively and individually lived through [that] tells us just as much about the lived reality of surviving a pandemic as statistics or headlines do. Each of these poems pulses with worry, with relief, with fear, with anger, with trepidation and hope, all the emotions we’ve experienced since the start of the pandemic. And I hope in a decade we’ll read them again, and remember.” During the competition Julian finally managed to get his treatment, and is now recovering.

The poet laureate Simon Armitage wondered on Desert Island Discs whether the pandemic was “testing my pessimism beyond its limits” but conceded that the spring weather had helped his mood. The Black Lives Matter protests erupted, and in America even that august body the Poetry Foundation was forced to promise sweeping changes, while in the UK George the Poet reminded Newsnight that black people suffered at the hands of the police in Britain, too. 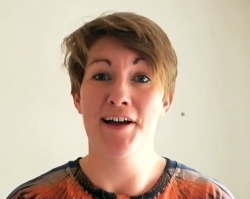 Teacher and poet Kate Clanchy won the Orwell prize while at the same time launching an anthology of lockdown poems by former pupils, including a number of migrants and refugees. Veteran poet and reggae artist Linton Kwesi Johnson won the PEN Pinter prize. An open-mic poetry group in Leeds celebrated a return to their live venue, if only in the pub car park, but sadly it proved a false dawn. Due to the pandemic the National Poetry Library on London’s Southbank was mothballed until 2021, while staff protested at cuts. Caroline Bird, pictured, won the Forward prize at a ceremony not at the Royal Festival Hall, but online instead.

In America US president-elect Joe Biden quoted Seamus Heaney in his Democratic Party nomination acceptance speech, while young Nigerian poet Emeka Collins used the global platform of Write Out Loud to protest at alleged state killings during protests in Lagos. American poet Louise Glück won the Nobel prize for literature. Poets we lost during the year included Derek Mahon, whose poem ‘Everything is Going to Be All Right’ was a source of inspiration and comfort for many during the pandemic, Eavan Boland, and Anne Stevenson.

Last month a film made last year for Refugee Week of a poem – a villanelle – by Write Out Loud’s Julian Jordon won the animation category in the Royal Television Society’s Yorkshire awards. The award was won by Marsden-based Fettle Animation, which was commissioned to produce something on the theme of You, Me and Those Who Came Before. Stockport Write Out Loud organised by John Keane produced anthologies of pandemic poems during another very active year for the open-floor group.

And at the end of this year Write Out Loud launched its own £10,000 fundraising campaign, to help us up our game, improve what we can do for you. We hope you’ll give us your full support, to help us make 2021 even better for poetry!

◄ What do open-mic organisers think about Zoom?