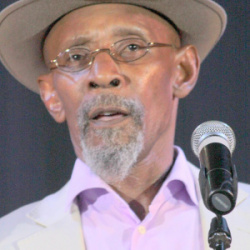 The poet and reggae recording artist Linton Kwesi Johnson has been award the 2020 PEN Pinter prize. The PEN Pinter Prize was established in 2009 by the charity English PEN, which defends freedom of expression and celebrates literature, in memory of Nobel-laureate playwright Harold Pinter. The prize is awarded annually to a writer of outstanding literary merit resident in the United Kingdom, the Republic of Ireland or the Commonwealth who, in the words of Harold Pinter’s Nobel Prize in Literature speech, casts an “unflinching, unswerving” gaze upon the world and shows a “fierce intellectual determination … to define the real truth of our lives and our societies”.

This year’s prize was awarded by judges Clare Armitstead, Sharmaine Lovegrove, and Max Porter. Claire Armitstead said: “Linton Kwesi Johnson is a poet, reggae icon, academic and campaigner, whose impact on the cultural landscape over the last half century has been colossal and multi-generational. His political ferocity and his tireless scrutiny of history are truly Pinteresque, as is the humour with which he pursues them.”

Max Porter said: “I can think of few people who more clearly embody the power of poetry to enact change. Few post-war figures have been as unwaveringly committed to political expression in their work. He has been fearless, and relentless, but tragically his message is now more important than ever, given the Windrush scandal and the ongoing systemic demonisation of the immigrant population and racial minorities in the UK.”

Sharmaine Lovegrove said: “I feel I came into the world with the sound of political and cultural activism from Linton Kwesi Johnson work ringing in my ears. His powerful words and energetic passion have guided me and many others to always interrogate and push forwards against the status quo. It’s been a honour to judge the PEN Pinter Prize this year and an greater honour to be part of the collective awarding the prize to a living legend.”

Linton Kwesi Johnson said: “Having received a Golden PEN award from English PEN in 2013, I was surprised to learn that, seven years later, I have now been awarded the PEN Pinter Prize. Awards are the nourishment of every artist’s ego. It is always nice to be acknowledged. It is especially gratifying to receive an award that honours the memory of esteemed dramatist, Harold Pinter, free thinker, anti-imperialist and human rights champion. I would like to thank English PEN and the judges for their kind consideration in honouring me again.”

Johnson will receive the award in a digital ceremony co-hosted by the British Library on 12 October, marking what would have been Harold Pinter’s 90th birthday.

◄ 'Learning to kill with her toes'

After Trump: an artistic and poetic reminder of America's Great Migration ►

Congratulations to Linton Kwesi Johnson on this award, and note the impressive company of writers that he joins. I went back back to read Laura Taylor's review of his performance in Liverpool in 2016 https://www.writeoutloud.net/public/blogentry.php?blogentryid=56812
I saw him myself in London a year before, and was impressed by his quiet dignity. Great man. The injustices and harassment that he wrote/ still writes about haven't gone away. They crop up almost daily in the news.

"Freedom of expression". High-flying words that seem to exist only
in terms of opinion and offence in today's world.