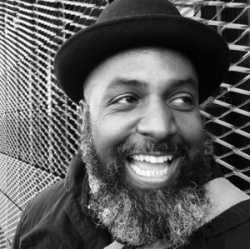 The British-Trinidadian poet, writer, musician and performer Roger Robinson has won the £25,000 TS Eliot prize for his collection A Portable Paradise. The book tackles racism, violence and the Grenfell Tower fire, but is built on observations of ordinary daily life. Robinson, who splits his time between London and Trinidad, has served as a mentor to many successful writers. A Portable Paradise is published by Leeds-based Peepal Tree Press, which focuses on Caribbean and Black British writing. The poet John Burnside, chair of the judges, praised A Portable Paradise for “finding in the bitterness of everyday experience continuing evidence of ‘sweet, sweet life’.”

Robinson was born in Hackney, east London, and at the age of four went with his parents to live in Trinidad, returning to England when he was 19. In the 1980s. He describes himself as "a British resident with a Trini sensibility". He was a spoken word performer in London in the early 1990s, before branching out to perform poetry with bands. He is currently lead vocalist for musical crossover project King Midas Sound. He has toured extensively with the British Council. As well as performing, he has led workshops and lectured on poetry and performance.

Here is the title poem from the collection:

And if I speak of Paradise,
then I’m speaking of my grandmother
who told me to carry it always
on my person, concealed, so
no one else would know but me.
That way they can’t steal it, she’d say.
And if life puts you under pressure,
trace its ridges in your pocket,
smell its piney scent on your handkerchief,
hum its anthem under your breath.
And if your stresses are sustained and daily,
get yourself to an empty room – be it hotel,
hostel or hovel – find a lamp
and empty your paradise onto a desk:
your white sands, green hills and fresh fish.
Shine the lamp on it like the fresh hope
of morning, and keep staring at it till you sleep.

Likewise this is the first I've heard of Roger but what an amazing writer, incredible piece.

This is the first time I have come across Roger Robinson, yet this brief excerpt has gained my interest, particularly in his style of writing. I shall explore more.