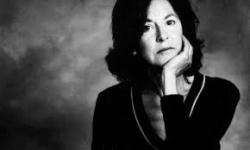 The American poet Louise Glück has been awarded the 2020 Nobel prize in literature for her “unmistakable poetic voice that with austere beauty makes individual existence universal”.

Glück, who is writer-in-residence at Yale University and lives in Cambridge, Massachusetts, was born in New York City in 1943 and grew up on Long Island. She has been praised for her poetry’s technical precision, sensitivity, and insight into loneliness, family relationships, divorce, and death.

She has published 12 books of poetry, including the recent Faithful and Virtuous Night (2014), which won the National Book Award. Glück’s early books feature the aftermaths of failed love affairs and existential despair.

She developed anorexia nervosa as a teenager, and as a result did not enroll in college as a full-time student. Instead, she took a poetry class at Sarah Lawrence College and, from 1963-65,  enrolled in poetry workshops at Columbia University.

In a brief interview with the Nobel organisers, which was relayed on Twitter, a clearly overwhelmed and reluctant Glück said: "It's too new, I don't know really what it means ... I think, practically, I would buy a house in Vermont." But she added, in regard to the publicity, "I'm concerned for the preservation of daily life with people I love." She concluded, despairingly: "It's too early here ... it's barely seven o'clock."

According to the Poetry Foundation, her “ability to create poetry that many people can understand, relate to, and experience intensely and completely stems from her deceptively straightforward language and poetic voice”.

The poet Fiona Sampson said: "Glück’s poetry, for all its huge distinction, its vibrant intelligence and its beauty, has never lost the ability to serve society, or the reader."