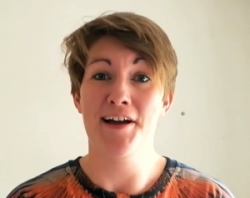 Caroline Bird has won the £10,000 Forward prize for best collection with The Air Year, it was announced on Sunday at a special online ceremony. After receiving the award, she thanked her Carcanet publisher Michael Schmidt, “for sending that letter when I was 14, and supporting me ever since”. Bird, who was born in 1986 in Leeds, intended the title of her collection to refer to the first year of a relationship, “the anniversary prior to paper / for which ephemeral gifts are traditional”; in the year of coronavirus, it has taken on another meaning as well.

She has said: ‘I’m fascinated with the idea that poetry is about inserting a mystery into the reader’s life not clarifying one, that by the end of a poem you should know less than you did when you started, that a poem is a kind of amnesia injection that makes the immediate world strange again.’

Her previous collection, In These Days of Prohibition, was shortlisted for both the TS Eliot prize and the Ted Hughes award. Her first collection Looking Through Letterboxes was published in 2002 when she was 15. She is also a playwright.

Sunday’s online ceremony, which was facilitated by the British Library, was certainly different from the usual glittering occasion at the Royal Festival Hall on the Southbank. On the one hand, it allowed watchers to immerse themselves more in the poems; but some sub-title mistakes – “sun” for “son”, for instance – were occasionally distracting.

The £5,000 Felix Dennis prize for best first collection was taken by Will Harris’ RENDANG. He was shortlisted for the Forward prize for best single poem in 2018: the poem, ‘SAY’, is one of the centrepieces of RENDANG, drawing together many of the poet’s concerns: family, borders, transience. Drawing on his Anglo-Indonesian heritage, London-born Harris is said to examine the contradictions of identity and cultural memory.

Malika Booker won the £1,000 Forward prize for best single poem with ‘The Little Miracles’, which takes as its departure point Tomas Tranströmer’s ‘Winter Night’; the storm of that poem is transformed into an interior storm, the poet’s mother’s stroke. Booker’s poem is about the process of care and recovery: its fears, its effect on sibling relationships, its moments of false hope, its triumphs and gratitudes.

She is founder of the writer’s collective Malika’s Kitchen. She said she was “honoured and overjoyed” to receive the prize, adding that it was “testimony to the long journey I have made in the British poetic landscape”.

◄ 'I will be happy if the whole world knows': Nigerian poet protests at Lagos killings in poem on Write Out Loud