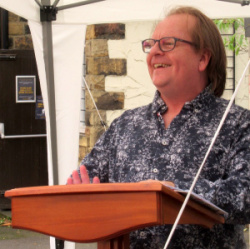 An open-mic poetry night in Leeds that has been going for more than five years has returned to its live venue after the easing of lockdown. Mark Connors, pictured, who is co-host with Gill Lambert of Word Club at the Chemic Tavern, has been Zooming their open-mic event during lockdown, and plans to continue with online events as well each month. He promised: “We'll be back via Zoom next Friday …  so we can invite poets from the rest of the country and the rest of the world.”

Meanwhile back at the pub for the first time since February – or rather, in the pub’s car park now beer garden – they had to make do without a mic. But things went fine, said Mark.

Oz Hardwck, one of the three headlining poets, with Hannah Stone, pictured below, and Pamela Scobie, was more than glad to be back. He said: "Over the past few months, Zoom has kept us going, and it's brought its own benefits - I launched my latest chapbook 'Wolf Planet' to an audience from Canada, the US, Germany, Italy, and many points in between - but there's nothing like hearing people in person. I'm very much someone who writes for the page, and don't have rehearsed performances; but what that means is that I read in response to the audience, from what I read to how I read it, and it was beautiful to be doing that again. The other guests - Hannah and Pam - were doing something entirely different, with costumes and everything, and it had the immediacy of theatre. And all the open mic readers, from the scurrilous comic to the confessional or political, was what these things are all about. Yes, it was a bit breezy and demanded a bit more volume than usual, but that just reminded us that it was live. Very special."

There will be a great deal of interest in this among open-mic poetry hosts who have not yet ventured back to live venues. We asked Mark Connors to talk us through it. A day after this interview, he wrote a poem, 'Something Human', reflecting on Zoom poetry nights on lockdown, and Friday's return to the Chemic Tavern. You can find Mark's poem, which we're delighted to share, below his interview:

What made you decide to return to a live venue? Was it your usual one?

I was approached by Anna, the landlady/manager from the Chemic Tavern, the venue we host Word Club at. She's missed us since our last live show in February, shortly after our fifth birthday. I started the night five and a half years ago so it's been my spiritual poetry home since I became properly involved in the live poetry scene in my early 40s.

What kind of Covid conditions were in operation?

Anna has a one-way system in the pub which works brilliantly. There was an efficient table service in operation that worked a treat. The staff did a cracking job. The room we usually perform in is a social distancing nightmare due to its shape and size. Wonderful and cosy just doesn't work at the moment. But Anna and Kit have turned their car park into a beer garden and erected five gazebos for the audience and one for the performing area. As we'd have to have a mic each, it's just not feasible with three poets as headline acts and another 15 poets on the open mic. So we had to project. The tables were arranged so we could effectively social distance at least a metre apart. 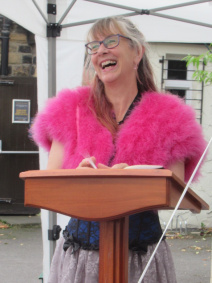 Have you been Zooming previously during lockdown?

Yes, we've continued our nights via Zoom. We were one of the first regular poetry nights to get into the Zoom groove from the off, really. Word Club’s reach has certainly grown. Zoom has been a great success for us. We've connected to poets all over the country and with poets in Greece and Canada, too. The positive from lockdown is that we can host headline poets and open mics from all over the world now, so if there's a poet in Papua New Guinea who fancies an open mic slot next Friday, he can come along if he/she/they have a wi fi signal! We also have a famous after party which often bleeds into the small hours where we have a few beers or wines and set the world to rights!

How did it go? What kind of turnout did you get, compared with pre-lockdown? What was your feedback like?

We had a good turnout, roughly the same as regular nights. About 25. It went like a dream. Each poet had to project a little due to having no mic and we had enough seating for those who turned up. The atmosphere was brilliant. One or two were a little anxious so sat further away from the rest of us but it was very convivial and lovely to see so many poetry friends in the flesh again, as it were. A celebratory experience for sure with a good few pints consumed!

Did you experience any unexpected problems?

No. It wasn't the warmest of evenings, so the success of the al fresco approach depends on the weather. It was a little windy but dry. And a bit cold. But Yorkshire folk are hard so we coped admirably.

Will you be doing it again?

Weather permitting, we'll be there next month. Our poetry nights are famous because there's a chippy next door. Regulars can either take them in the pub or eat them outside. And chips with curry sauce can warm anyone up!

I’ve seen most of them since lockdown,

listened to their poems, chatted

into small hours at after-show parties

through the weird filters of Zoom, allowed

into their kitchens, lounges, bedrooms;

in some ways, we’ve never been more intimate.

I’ve seen close-ups, seeing more when I meet their eyes

as if looking into them for the first time, some happy

just to listen rather than engage too much,

some trudging to their fridges, guiding us

through the finer details of their homes

in Leeds, the Midlands, Greece and Canada.

Tonight, I see them all for real,

notice how unsure we are at first,

if not a little overwhelmed,

a little stunted, how we stutter

for the right words, not well-versed

in humour but get better by the second.

And applause sounds so much richer

outside on an unseasonably cold night

as if it’s been auto-tuned to a pleasing pitch.

Of course, all this is far from normal;

we haven’t quite remembered how

without it feeling so extraordinary.

◄ 'Now, in what seems just a few yards down the block, I'm there'

Passport to Here and There: Grace Nichols, Bloodaxe ►

Thanks for the interview, Mark - and thanks for the poem, too. It will resonate with a lot of us as we ponder returning to live venues.

Sounds like it went well, so well done Mark & Gill, you’re always ahead of the pack! I wanted to see Oz & Hannah & Pam but had a hard day at work. Maybe next month...