What do open-mic organisers think about Zoom?

It was the day that lockdown was announced in mid-March. Sale Write Out Loud’s open-mic night was due to be held as usual at the Waterside arts centre in Sale in Greater Manchester the following night. That event was cancelled, but organiser Sarah Pritchard said it would still go ahead – on Zoom. And it did.

She said afterwards: “We had a great time! I highly recommend it. We will do it again until the curfew is over.”

She added: “It helps if people are in well- lit spaces to see their faces and have no background noises on and don't make too many other noises ... But hey, you get a tour of other homes and get to meet poets' cats and dogs!” She said it was a great way to keep events going and “cross-fertilise groups and reach out to people who were already homebound and disabled, which is what happened last night”.

Sarah said she had recently been involved in a Zoom conference for a World Psychotherapy conference in Birmingham, plus international teacher friends teaching online in China and Saudi, plus Playback International theatre companies doing virtual performances in India and Indonesia ... “so, inspired by them, I thought doing our poetry night would be the obvious way to go.” She added: “Let's do it more. We'll get better and better at it and it's the perfect antidote to confinement and social distancing.”

Nine months later and we’re all much better acquainted with Zoom – and Sarah’s positive words about it still ring true. Reporting on it for Write Out Loud back in March, I was still unsure about Zoom and how it actually worked, to be honest. I run the Write Out Loud Woking open-mic night down in Surrey with Rodney Wood, and it was a couple of months before we felt brave enough to follow Sarah’s example.

But meanwhile I had taken part in Sarah’s second Sale Write Out Loud night on Zoom, and seen the benefits for myself. Afterwards I knocked out a rough review of the occasion, although I hadn’t been planning to in advance. It was there that I met disabled Wigan poet Shaun Fallows, who has since become a fixture at our Zoom nights in Woking.

Shaun himself has mixed feelings about poetry on Zoom. On the one hand he relishes the chance to perform further afield than he could hope to in pre-Covid circumstances: on the other, “the Zoom aspect is strange because I’m a bit old-fashioned. I love the face to face, and I can’t stand the digital problems or sometimes lack of atmosphere. But then again it’s supplied me with the mini-country tour I’d always thought of trying. So many buildings and poetry nights just don’t plan on accommodating wheelchair users.”

I met another fascinating poet when I later read at Write Out Loud Wigan on Zoom, compered by Ian Whiteley … the veteran performance poet from Bradford, Nick Toczek, who has been writing a Covid poem daily since March, and who provided another great interview for Write Out Loud. That night at Wigan another of the poets was tuning in from California.

I asked Ian Whiteley what he felt about Zoom. He said: “Zoom is necessary at the moment, but not ideal. I find it a difficult medium and I think it’s difficult to maintain concentration on what poets are saying – which I don’t have a problem with in the real world – maybe that’s just me.

“I hope people don’t prefer it to live shows face to face. I find it a bit like football – OK for watching but not as good as being at the game. In the same way that football has been impacted for the worse due to TV, I would hate to see poetry go the same way.”

He agreed that Zoom had its benefits for poets like Shaun, a long-time regular at Write Out Loud Wigan pre-Covid as well, “but that is more a reflection on some live venues poorly catering for the disabled than a real difference between the two mediums”.

Ian conceded that Zoom has been useful in encouraging poets from further afield to take part: “We have had poets from USA, Canada, Spain, India to name a few."

He joked about “opening up Wigan folk to the deadly influence of Yorkshire folk (regulars at my other hosted poetry open mic night – Gobby In The Lobby – in Wakefield). The Wigan event is capped at 30 performers and we have had a full book for most of them, with just a couple around 25 mark. I advertise via our bespoke Facebook page as well as the regional poetry group sites – I try to encourage new readers as well as veterans of the scene – and have found that quite a few newbies have given it a go, whereas they may not have done so if they were having to get up in front of a live audience.”

In the early days there was the occasional trolling incident before people got the hang of online security. “Following one Zoom bombing incident we’ve tightened our security procedures – and these have (so far) been successful – although when the incident happened it was no different to some extent than a rowdy mob at the bar while poets are performing in pubs.

“I think the main comment I’ve heard from people attending Zoom poetry events is ‘I can’t wait to get back to real, live, events’ so, whilst Zoom has been a godsend in keeping the poetry community together and active during lockdown(s) I don’t think it will be in detriment to live shows. If there is still a need for Zoom events in future I would host them – but as a performer I might not visit many myself once the ‘circuit’ becomes active again.” 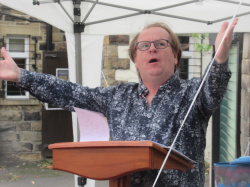 Ian’s misgivings about Zoom were echoed by Mark Connors, pictured, organiser of Word Club in Leeds, back in the summer, when the easing of lockdown restrictions enabled him to return to their old venue, the Chemic Tavern, even if poets had to perform in the car park, rather than in the pub itself.

At the time he told Write Out Loud: “Over the past few months, Zoom has kept us going, and it's brought its own benefits - I launched my latest chapbook 'Wolf Planet' to an audience from Canada, the US, Germany, Italy, and many points in between - but there's nothing like hearing people in person. I'm very much someone who writes for the page, and don't have rehearsed performances; but what that means is that I read in response to the audience, from what I read to how I read it, and it was beautiful to be doing that again. Yes, it was a bit breezy and demanded a bit more volume than usual, but that just reminded us that it was live. Very special." Sadly, Word Club’s return to the Chemic has proved a one-off, for now.

Jeff Dawson has been operating Write Out Loud Bolton on Zoom during the pandemic, but has adopted a more cautious approach to his guest list. He said: “I've found using Zoom fine most of the time, although I must admit as it develops, I wouldn't pretend to know everything about it - there seem to be a lot of settings etc which other folk seem to know more about in respect of getting the sound and vision right!

“I think it's worth trying to find out more about that as they develop it. I've been hosting the Bolton WOL night but just keep it to a select few, mainly so it is less hassle for me worrying about advertising and not knowing the folk joining in. I also prefer it to be a quiet night that only lasts and hour and half at most.”

At Write Out Loud Woking, where we’ve had a mix of poets from places like Canada, Edinburgh, Nottingham, Paignton, and Canterbury, as well as Wigan and Bradford, those taking part have been generally enthusiastic about Zoom, and some have even said that they would be more likely to attend online events than live nights in the future.

I would say that Zoom has helped us discover that there is a big poetry world out there. I hope to keep Zoom nights going at Woking in some form, even when we return to our live venue. For the last couple of months we have also kept the room open for people to continue chatting after the end of formal proceedings, if they want to. I’m not suggesting that everyone is able or would want to do this, but it has worked very well for us.

This article has been purely about grassroots poetry events on Zoom. But there have many livestreaming events on other platforms, including Facebook, and we would love to hear the views of some of those organisers and promoters.

Thanks very much for your comments, Andy. Sorry to hear about more Zoom bombing incidents - there seemed to be a few at the beginning, but I had assumed that people had become more security-conscious, and that Zoom had stepped up their game, too. We've always been lucky so far in that regard at Woking. Good to hear that Stockport has been doing well - I've mentioned elsewhere about your anthologies. Interesting but worrying when you say that 'quite a few nights have stopped altogether'. Anecdotally I get that impression around London, too - or that some nights are just waiting for lockdown to end for good. I hope that techno-fear is not the reason - Zoom is really very easy to set up and operate, as you know yourself. It's a good way of keeping our poetry communities together.

As a footnote here to this excellent article, Greg is the Zoom Bombers thing which has happened and is still happening. I co run Speak Easy and we've kept a careful eye on it really and we've not had any problems yet but I know of another night which I won't name which has being Zoom Bombed that I won't name at least twice and it's upsetting to see that.

WOL Stockport which isn't mentioned here is still going strong as I do the I.T. for John for it (I'm using Zoom for Podcasting and Speak Easy so it's no extra cost) and that's being kept akin similar to what WOL Bolton does by Jeff on it's usual time and date we used to have when it was a live event.

It's being interesting times over the past few months as it's enabled me to meet and get to know poets from all over the UK and beyond and I know quite a few nights will be carrying on with both internet and live events when we are able.