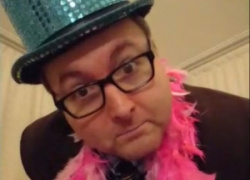 First, there was a question about swear words. Robert Garnham, pictured, Devon-based performance poet and MC of the Facebook group Big Poetry Goes Viral, directed the poet to the guidelines: “Just a few ground rules, as this counts as a broadcast: no swearing, no hate speech, no pornography.” He conceded that a few “mild” swear words would be ok.

Then we were off! Robert, appearing in front of some pale curtains, warmed us up by donning a mask, with additional dancing and a bit of juggling. He kicked things off with a few of his own poems, saying to his audience at the end of his set, “Thank you very much … I can hear your applause from here!”, before handing the Facebook mic to the first poet on his list, Clive Oseman.

Clive was so close to the camera that you could only see half of his face, but otherwise he managed the technology successfully. Next up was Jamie Harry Scrutton, who was nicely framed in front of a mirror and what appeared to be a cupboard, with a poem about an infestation of fleas.

There followed a couple of glitches. The next two poets on the list, Simon Williams and Paul Temme, were both unable for one reason or another to appear live. So the virtual baton was handed to Julian Isaacs, “trying to look at two devices at once, so bear with me.” Julian was appearing in what appeared an elegant room, with pictures on the walls. “Nice coving,” someone commented.

Jonathan Robert Muirhead gave us a sideways view of his head throughout, despite someone urging him to “turn the screen round”. Jonathan carried on, oblivious of this advice – to be fair, he could hardly break off to look at the comments - against a backdrop of check, possibly tartan curtains.

Pete Edwards got off to a flying start, right way up and everything. And the baton handover to Judy Edwards, in the same room as Pete, was impeccable. Judy began with a nature-walk poem, that we should probably describe as a “daily permitted exercise” poem nowadays.

Elizabeth McGeown signed off “from Belfast”, after giving us an epic paean to childhood dreams and fantasies, and writing and reading. The poem included the line “We’re all geeks” – well, some more than others, I suspect, at least as far as online expertise is concerned.

Commotion and Emotion (aka Kerry Vincent) told us she was in isolation with seven of her nine children – and gave us a moving poem, ‘As He Ran’, about how some of those children, after being troublesome at school, had turned into smart, bright young men: “I struggled with the child, but I’m proud of the man.”

The last poet billed, Halima Mayat, failed to appear, which provided only a slight anti-climax at the end of a very interesting evening. Hats off to all the Big Poetry Goes Viral performers. It’s one thing plucking up the courage to go up to the mic at a live night – it’s quite another trying to wrestle with technology and expose yourself in your own home. I’m not sure I’m quite ready for that myself. But this option allows those who are housebound under normal circumstances to take part, as well as those who don’t under usual circumstances have a live open mic night that they can get to in their immediate area.

And they may have passed me by - but I didn't hear any swear words, not even as poets grappled with the technology.

Afterwards Robert Garnham said the occasion had “a kind of ramshackle, thrown-together nature which I really enjoyed. The performers seemed to be enjoying it, too. This was actually the second one, as we had one last week too, which was curated instead of an open mic. The catchphrase seemed be 'Am I on?', or 'Now, how do I turn this thing off?' “

He added: “The downside of Facebook Live is that you can't really gauge the audience response, though you are aware how many people are watching, and they can comment as you are performing. Other organisations use Skype or Zoom and I'm looking at both options, but at the same time I want it to be open so that as many people as possible can enjoy it.”

Robert said the response to Big Poetry Goes Viral had been “phenomenal. I started it just for the regulars at my night, Big Poetry, so that we could all keep in touch and continue performing. But word got out and we are heading towards 350 members all over the UK.

“I think we had quite an amazing geographical spread. Elizabeth from Belfast, obviously, and Jamie Harry Scrutton lives in Leeds, Clive Oseman in Swindon, myself in Devon. We had one gentleman with a Scottish accent, though that doesn't necessarily mean that he was in Scotland, of course. I have friends in New York who are interested in joining in at some point, and others in Los Angeles, so we might go international at some point, who knows. I suppose that's the beauty of social media these days, there are no physical borders and it brings people closer together.”

He said that he would “certainly be doing this again. Next week I'm putting on a curated version of the show on Thursday night and our headliner will be Melanie Branton, who is not only a powerful and amazing performer and writer, but also one of my best friends. And then the week after, maybe another open mic. Also, I shall be doing my new show, Juicy, at some point. Depends how long we are locked down for.”

In normal times Big Poetry is based in Torquay at the Blue Walnut Cafe. “The night itself has been running for 11 years, so I guess it's one of the longest running in the UK … the performance poetry community down here in Torbay has a very strange local micro-climate where performance, humour, comedy and props are prevalent. I've performed all over the UK and each area has its own scene or feel, but I've never performed anywhere where comedy and silliness are the defining characteristic of the local scene other than Torbay.”

As a professional performance poet, Robert, like so many others, is facing a long lay-off as far as gigs are concerned. “Last year I toured the UK not only with my show, Spout, but also with Hammer and Tongue. It was an amazing experience and I was lucky enough to visit absolutely everywhere you can think of. The downside was that it was tiring and by December I was totally knackered and eager to start concentrating on writing new material. I gave myself three months off so that I could start up again in late March and I had gigs planned, again, all over the UK. And look what's happened.

“I know I'm not alone in this, I know plenty of spoken word artists and comedians who are suddenly sat at home with no work. It's a scary time and I'm determined to get through it by keeping busy and giving opportunities to people to perform. And also, of course, I've suddenly got lots of spare time for writing and rehearsing, planning shows, that sort of thing.

“It's difficult not knowing how long the situation will last. I have a new show, a reworking of Juicy from a few years ago, which was booked in to fringes in Reading, Barnstaple, Guildford, Morecambe and Edinburgh, and also festivals such as St Ives and Glas-Denbury. Some of these have already cancelled, and some are saying, well, just hang on in there, we will let you know. That's one of the reasons why I decided to get online as soon as possible. I was worried I'd gone a bit rusty, having not really performed in earnest since December.”

◄ My kind of poet: the seriously funny Wendy Cope