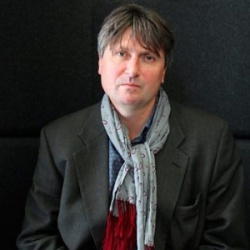 The poet laureate Simon Armitage delivered his own take on the Covid-19 lockdown during his Desert Island Discs appearance on BBC Radio 4 on Sunday. In an interview with host Lauren Laverne that was conducted in London and in Yorkshire, instead of face to face in a single studio, he said he was not an optimist by nature, but added wryly: “I wonder if [this current situation] is testing my pessimism beyond its limits … the weather has helped.”

He said he had always described himself as “a kitchen-sink writer”, explaining his belief that there was something sacramental and spiritual about the “quite astonishing” everyday. It had never been a plan or campaign of his “to be a northerner … but it’s become increasingly important to have somewhere to come back to”.

He talked about the village of Marsden, where he acknowledged – and as Marsden resident and Write Out Loud founder Julian Jordon has previously pointed out – he is always known as “Peter’s son”. The joke at the local paper, the Hudddersfield Examiner, he said, was that they had a bigger file there on his dad, a mainstay of the local am-dram scene, than they had on him. “He played Bill Sykes in Oliver … he was a bit of a method actor … befriended a dog for about a month before the show.” Armitage junior had once appeared as a “young, hot-headed, Russian revolutionary” in Fiddler on the Roof, “but I don’t think people are still talking about it in the village”.

He wrote his first poem around the age of 10, on the subject of Christmas. He thought it was good, but it did not make the top six that were pinned to the classroom wall: “I suppose I was heartbroken at the time … I have wondered on occasions if I have just been pursuing a career of revenge.”

He rediscovered poetry at the age of 16, when he started reading Ted Hughes, who came from Mytholmroyd, in the next valley: “If someone from Mytholmroyd could do it, why not someone from Marsden?” He talked of how it dawned on him that although it was just black marks on a white page, you could make exciting things happen in someone else’s head: “The shock of that realisation … the primitive magic of it.” His first published poem was in the late 1980s, in a local magazine with a circulation of about 200: “I’m not sure if it ever gets better than that moment.”

Lauren Laverne asked him about his time as a probation officer in Manchester. Armitage replied that he didn’t really have a plan after his geography degree at Portsmouth polytechnic. His father was a probation officer at the time. “A lot of the work was drug-related, people living incredibly chaotic and disordered lives.” It could be upsetting and dangerous. He was assigned to Wakefield prison, where the serial killer Dennis Nilsen was located: “I was face to face to face with people I’d read about in the papers.” He added: “By the time I decided to quit, I’d probably given my best. By the time I finished, it had probably finished with me.”

He had been first regarded as a contender for the laureateship in 2009, when Carol Ann Duffy was awarded the post. “William Hill had odds on me … my dad lost a little bit of money … but it would have been the wrong time for me.” He regarded being given the job as “an enormous compliment”. It was true that he had celebrated on a trampoline, which had been tricky while juggling champagne.

The poet laureate’s recording choices were David Bowie’s ‘Moonage Daydream’; a choral rendition of William Blake; a song from the musical Oliver!; Ted Hughes reading the poem ‘Icecrust and Snowflake’; Joy Division’s ‘Atmosphere’; Soft Cell’s ‘Tainted Love’; a folk song known as the Holmfirth Anthem; and a setting of a Robert Burns poem, ‘My Heart’s in the Highlands’. And he opted for Bowie as the one piece of music to take with him to the desert island, imagining himself “glam-rocking around the seashore every now and again”.