Pit Yakker Read a lot Write a bit Hope you enjoy my attempts Book now out: The Darkness and The Light https://www.amazon.co.uk/dp/B0BKMVJ4MH/ref=cm_sw_r_apan_ZYD4XW20SXE2BVMYG9YR

About some of the poems

The thief of breath & hugs (pt 1) Life during covid 19. Wrote after observing a family waving to an old woman trapped behind a sun dappled window, who, in between blowing kisses, was shaking her fist skyward to some, so it seemed to me, invisible foe! Part 2 Included in WOL's Beyond the storm anthology. Relates to 'poor old Edith' from part 1. Her Last Dance Written after my Grandma passed away. So there's a little bit of my heart tucked away within there somewhere Political Irrigation! Politicians! What else can I say! One thing Brexit proved was that they're all in it for themselves & turn into unruly kids with quivering pet lips when it doesn't go their way! How it should bee...? Looking through old family photos & my own, rose tinted, memories of long walks & picnics in sun soaked fields and sandwiches that tasted like a little bit of heaven ( even though they were probably corned beef & tomato, & hard boiled egg with salad cream !) How free are we? Just a walk down Castle Eden dene brought this one on Your scar Sitting at an under 16's disco on holiday at Cayton Bay back in the early 80's, I was about 11 or 12 & on the table in front was a man with his back to me, sipping whiskey & a girl about my age. She was sobbing uncontrollably & the man kept turning to her & saying things like: stupid...fat...ugly little porker... useless etc. The girl just kept saying, 'Daddy please' over & over. I still get that horrible twisted burning feeling in the pit of my gut when it drifts back into my mind. Not knowing what else to do, I got up & asked her to dance. He just laughed & she told me to F off ( what else could she do). Soon after he got up & walked out & she ran after him & I never saw them again. I know it doesn't sound much, but those 5 or so minutes often come back to twist my gut. That incident & some research into psychological abuse produced this poem. I hope life eventually treated her well. Ethereal Streaming. Erm...not a clue Seven Little Girls. Over my garden fence growing up was a wood, were I spent many a day & night climbing trees & building camps & telling ghost stories with mates, torchlight under chin of course ?? Above The Clouds. Pretty self explanatory! But will we ever reach the awakening? Bed Of Bones. Actually about abuse. The old lothario promising the world then stripping them down to be his possession without ever letting them leave. The Darkness And The Light. After reading about a frail, old man in a care home who passed away, on his own, without being able to see any family for weeks. Head Space. Just came to me while I was lying in the bath listening to a bit of Led Zeppelin! ?. Have no idea why it popped into my head during Stairway to heaven! Cooking Pot! Homelessness feeds homelessness etc. We've all been guilty of averting our eyes & ignoring the plight of our homeless. Myself far too often. Such dreams as stuff are made on... So, I wake up last week, knowing I'd had such a bizarre dream. But all I could remember was golden syrup, dark woods, school friends and a coconut! So, that's where this came from...and who knows, it might be exactly how it developed? Oh come to me! Influenced by the classic b& w adaptation of M R James Whistle and I'll come to you starring Michael Hordern. The Crimson Queen! Just thinking about the wife... ? Nirvana A tale of crippling shyness leading to depression The Old Garden Gate The hopes & naivety of a young lad leaving his village to fight in the 1st world war. A Winter Escape. Fun in the snow A place where mushrooms grow. Took on a (dark) mind of its own. The moral of the story? Never pick mushrooms from strange cavities ...? Starlight. Time, Life, change, love, togetherness. The end Beautiful Friend. A Silhouette in Time. The idea came from a memory of our first home, which was a Victorian terraced built in 1900, complete with original coving, ceiling rose & fireplace etc. On the 1st night I stopped there, while I was fixing it up, I was sat in the armchair, left by the previous owner, having a sly glass (or more likely a can of John Smiths) or 2 in front of the coal fire & for a moment, out the corner of my eye, I thought I saw a door in the middle of a side wall. But when I turned, of course, it was just a solid wall. Anyway, something triggered that memory & this is the result. Nectar The innocence of nature slowly being stripped away & ourselves with it.

I'm not a poet 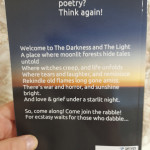 Thank you for your like on Calendrical conclusions that I accidently deleted.

So many thanks for taking the time to read and pass comment on Ebenezer.
Fortunately my wife is the counter-balance to my humbuggedness

Many thanks for reading and commenting on my poem Stephen. I have enjoyed looking through your work.

Stephen, don't doubt your talent for second. Congrats again, it's such a uniquely brilliant achievement. Also, I see you're Sedgefield-based(?). I'm from Darlo myself, though been gone for a long time now.

Thank you for leaving a like on one of my recent poems!

Thanks Stephen for liking ; Broken down Angel '

thanks for explaining what a Pit Yakker is.
never would have guessed.

Old Oak the poem
is about the tree
but incidentally
also about me.
😃

is that the inside of your washing machine?

your wife does not have eyes behind her back?
a very rare condition.

(you never did say what that thing is on your web address.)

I deny knowing me.
?

kids don't run anymore.
they only watch video games-
too fat to run
and too dumb.

All in jest Stephen.

By the way,
what is that cloud thing in your photo?
Is that you?

You blocked me?
what on earth for?
I know my poems are not that great
but still....
that's going a little too far!
?

Now that I think about it
what I thought I thought
is not much of
a thought.
?

Stephen, you have shrunk. Surely you are not fifty years old, if so what foundation cream are you using?

My pleasure. Shooting Star was great.

Hey, thank you for reading and liking my last poem!

Thanks very much, Stephen, for taking the time to read and comment on Care. Have tinkered with it a bit now. The industry is a real disgrace eh? It needs nationalising, now.

"To Bloom" is great

WOW! Just read your poems, and they are amazing!

Hi, Stephen! Thanks for your welcoming comment on my profile ? I’ve really enjoyed reading through yours! In particular, your segment “About each poem”- learning about where an artist finds their inspiration is one of my very favorite things! Your concepts are thought provoking and nostalgic. Looking forward to reading more of your pieces!

I agree.
the W give you more gravitas.
sounds like you are really important.
so keep using it.

Thanks for the comment Stephen W Atkinson
without a period after the W
what happened to it?
did someone steal your period?
and what is that in the window behind you
a soccer field
a cemetery?

Thanks for your long and interesting comment
Stephen W. Atkinson.
Next time, be more brief!

Cheers Stephen for your liking of my “New Worlds Collide “
Tommy ?

Thank you for replying to my query about the books you read. I am like you in that I am also a very slow reader. I enjoy absorbing the content of the book, its vocabulary and style of writing and not merely the story itself. I often have two or three books on the go at any one time. D H Lawrence and Carlos Ruiz Zafon are two of my favourite authors.

thanks for visiting,
next time help yourself to a beer
in the fridge.
?