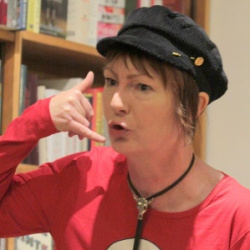 Laura Taylor is a force of nature, worth abandoning a quiet life of retirement and taking the train to that London to hear. That London? Yes, Laura is a popular performance poet at festivals and clubs in and beyond the north-west, who first trod the boards at Write Out Loud Wigan. But last weekend she was appearing at London venues for three nights to promote her second collection Fault Lines  - just as she had pitched up in the capital two years ago to showcase her first book, Kaleidoscope.

The first poem in Fault Lines is the title one, and Laura opened her set with it at Housmans radical bookshop at King’s Cross on Saturday night. It was also in her set at Brixton two years ago on her first London mini-tour - but 24 months have not dimmed her fire, and her plea for us all to be kinder to call centre workers. She is equally still angry about the charges incurred for women’s necessary sanitary products - and then more charges for menopause therapy products (‘Blood Money’).

There is humour aplenty too, as well as outrage, in her poem about the discomfort and indignity of breast screening, for which she dons a pair of “knitted knockers” to illustrate her points. Yet it’s not all knockabout, by any means. There’s her grim take on William Blake’s Jerusalem anthem, about life on a northern estate: “Round our way .. // The Holy lamb was sanctioned / and satanic mills are silent; / we blind ourselves with arrows of desire.”

And then she turns the sound levels down a tad, for a moving poem about her father that takes an unexpected turn (Tai Chi’), and a love poem that also has a real twist at the end (‘Darlin’ Dancers’).

Funnily enough, I’ve just been rung by a call centre while writing this, although it’s not that surprising - I usually get one around this time of day. I don’t get out so much, now that I don’t jump on the train to go to review poetry gigs so often. But it’s Bonfiire night soon, isn’t it? And I’ll always make an exception for Laura Taylor and her unique brand of fireworks.

Laura generously made time for other acts during her London tour, which also included gigs at the Bread and Roses pub in Clapham, and Bar 48 in Brixton. On Saturday night we had open micers Graham Mckay-Smith and Suzi Challenger, plus Grim Chip aka Chip Hamer, from Poetry on the Picket Line (“People standing around on real picket lines reading poetry”), as well as guest poets Gerry Clarkson and Janine Booth. 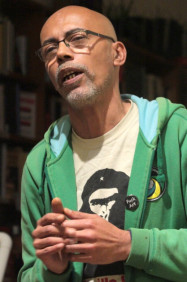 Gerry Clarkson, who goes by the self-styled alias of Guerrilla Lips, delivers lengthy, crafted and well-argued performance poems about the viability of protest, in which Malcolm X, Martin Luther King, Rosa Parks and Gandhi feature; the wrong subjects being addressed in Black History Month (“Should we have called it White Guilt History Month?”); and the various meanings and nuances in the phrase “Fuck Off” – it’s surprising how many there are when you consider the matter. He also had a very long and amusing poem about playing the benefit system to your advantage, by just sticking to the rules. 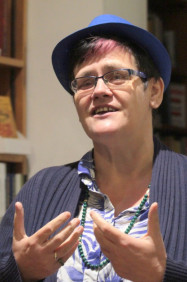 I was last at Housmans for a poetry gig two years ago, for the launch of the anthology Poems for Jeremy Corbyn. On that occasion Janine Booth, aka The Big J, who has a long and distinguished track record as a veteran of the 1980s ranting poetry scene, had had to pull out as compere because of ill health. Last Saturday she was back, and we were delighted to hear that she is clear of breast cancer “thanks to the wonderful NHS”. She is planning to publish a book next year documenting The Big J’s battle against the Big C.

She also works as a night station supervisor on the Tube at Highbury & Islington, and had to head off to work as soon as she finished her set: “It’s a great job as long as you find drunk people entertaining.” She certainly finds poetic material there. Her ‘Night Tube’ poem, documenting the characters around at that time of night, has a beautiful humanity about it, reminiscent of Auden’s ‘Night Mail'. And after she delivered it she was gone, without fuss, into the night to start her shift.

Sounds like a great tour and looks it too, judging by Laura’s video on YouTube of ‘Nativity ‘73’.

Dead proud of you is what we is, Laura. You tell it like is, and like it should be. Dead proud.

It was great to see you again too, Laura, and in such stomping form. And your poetry mates as well. I enjoyed my night out in that London very much.

Thanks for a wonderful review Greg, and it was really lovely to see you again and catch up. I was immensely proud of every poet who performed over the weekend, and really could not have asked for better.

Sounds epic. Glad to know poetry is alive and kicking somewhere at least.