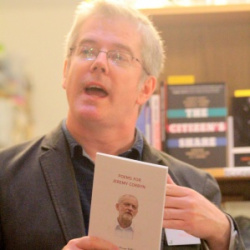 The news that the anthology Poems for Jeremy Corbyn was being reprinted because of its popularity, reported right at the start of its launch at Housman’s radical bookshop in London, probably received the biggest burst of applause of the night.

Compere Tom McColl, pictured, said the book had received lots of attention in the national media around the time of the Labour party conference, but added that the coverage had not given “a true view of what the book is about”. The Fleet Street reporters flicking through the slim volume in Liverpool, looking for an angle, may have been bewildered to find that within Poems for Jeremy Corbyn there are not in fact that many poems about the Labour leader at all. As editor Merryn Williams says in her introduction: “The fifty poems included are not hymns of praise to an individual but poems written in the spirit of Jeremy Corbyn. The subjects are war and peace, human rights, the misery of excluded people in an age of austerity, bullying and Brexit.”

London firebrand poet Janine Booth was to have compered the evening, but has recently been diagnosed with a serious illness, so Tom McColl read her poem, ‘How Low Can They Bow?’, which refers to the media spotlight on Corbyn: “”Respect for war dead is not proved / By the depth of bow you’re showing. / But by the mountains you have moved / To stop their numbers growing.” (Our best wishes to you, Janine, from Write Out Loud). 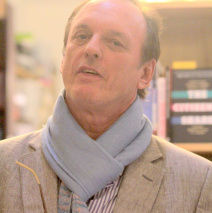 Neil Beardmore, pictured right, from Milton Keynes, was next, with his poem’ Refugee’, about a teenage African schoolgirl who had fled horrors and yet was bullied at her British school. He had been a teacher at the school, and had written the poem out of anger at the way she was treated. Several years on, he reported the happier news that she was about to graduate from university.

Australian Katherine Gallagher read something a little different, ‘The Long Reach out of War’, about restoring the glass and stone of bombed cathedrals. Helen Kidd’s ‘Tell Me Lies About the Austerity Plan’ paid homage to Adrian Mitchell’s classic Vietnam protest poem, and included the line: “You take an honest leader, and try to shake him all about.”

Performance poet Steve Pottinger’s fine poem ‘Stabberjocky’, about the Tory infighting after Brexit, and in the style of Lewis Carroll, provoked plenty of chuckles. It has already been noticed by the national press, although you read about it first on Write Out Loud. Introducing it, he said: “At a time of nonsense politics, a nonsense poem seemed the only answer.” 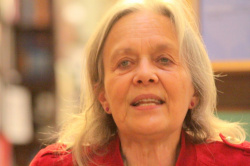 Louise Larchbourne, pictured left, credited Jeremy Corbyn for helping to secure free childcare in Islington in the 1980s, thus coming to her rescue as a young mum. Her poem ‘Castle Corbenic’ was her version of the 12th-century Grail poem about Perceval; the castle was given the name Corbenic in later versions of the poem.

At the start of the evening Tom McColl had said that “you don’t have to agree with everything he [Corbyn] says, but he is a principled person”. Mark Haworth-Booth pointed to the range of the anthology by telling the audience that he and his wife were Greens, rather than Labour members. One of his heroes is Wilfred Owen, and he insisted that if Owen were alive today he would be writing about the “willed ignorance” surrounding climate change. ‘The Anthropocene’, written with acknowledgements to Owen’s poem ‘Exposure’, talks of “a mass extinction. It’s the sixth. Our first and last.” 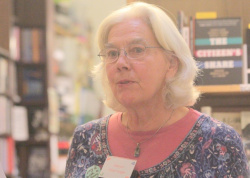 Alwyn Marriage’s poem ‘Gentle Giants’ refers perhaps to media representations of Corbyn when it says: “I prefer the gentle men, / giants who can …/ listen / to the conversation / of those whose voices are / much softer than their own.” Rip Bulkeley’s said his ‘Song of the Knives-in-the-Backbenchers’ was far too long for the reading, and anyway needed to be sung by five people. He read another couple of Corbyn-related poems instead, including the lines: “Vilified by hacks from here to Timbuktu … his faults and merits are all true.” Southend poet Adrian Green’s poem ‘Red’ talks of “a spirit” that “endures in the glare away from shadows”. Tom McColl’s own poem ‘The Chalk Fairy’ describes chalking round the outlines of homeless people sleeping rough in London, the city resembling “one big crime scene”. 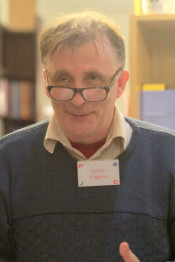 Satirical Irish poet Kevin Higgins, pictured left, said: “I took up poetry to get away from politics. The fact that I’m here is a monument to failure.” His poem, ‘On Your Unsuitablilty For High Office’, has as its epigraph Leonard Cohen’s words: “You loved me as a loser, but now you’re worried that I might just win,” and conjures up figures such as Earl Haig, Franco and Myra Hindley being enlisted by the media in its desperation to rubbish Jeremy Corbyn.

It was a good turnout at Housmans, with plenty of young people in the audience, and plenty of books sold, too. Maybe it was a little disappointing that the Labour leader himself didn’t show (if he did slip in and then out again, I didn’t see him), given that he is said to write poetry himself. Maybe he had something bigger to go to. Or maybe he will turn up at next Saturday's Oxford launch at Wesley Memorial Hall, where music is promised, and possibly a little more razzamatazz. Greg Freeman