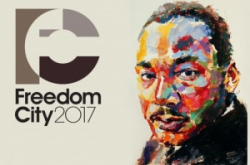 Fifty years ago – on 13 November 1967 – the civil rights activist Dr Martin Luther King received an honorary doctorate in civil law from Newcastle University, the only university in the UK to so honour him. He gave a rousing, inspirational speech without notes. It was his last speech outside the US before his assassination five months later.

At the end of his Newcastle speech Dr King looked forward to the day when “justice will roll down like waters, and righteousness like a mighty stream”.  On Saturday night poets gathered in Newcastle University’s Kings Hall – the same hall where Dr King received his degree – to mark the moment by launching The Mighty Stream, an anthology of poems in celebration of him.

The anthology, published by Newcastle Centre for the Literary Arts, in association with Bloodaxe, is edited by Carolyn Forche and Jackie Kay in a transatlantic collaboration. In her foreword to the book Kay, who is Scotland’s makar (poet laureate), said: “When I was growing up, it seemed that racism might be something that we could fight and that we would win. I never imagined, none of us naively did, that we would now be living through times when Martin Luther King’s famous speeches and interventions feel prescient.”

On Saturday night she added: “Dr King never lost hope … and we must never lose hope either.”

She introduced four poets at the reading – Fred D’Aguiar, Imtiaz Dharker, Sarah Howe, and Major Jackson. D’Aguiar, a British-Guyanese poet, read his long poem ‘Call & Response’, which he explained was in two parts – the first from the point of view of the bullet that killed Dr King, and the second from the victim’s viewpoint. It ends: “Rake into my body, drill deep, and whip my soul away, / Make my words and me, at thirty-nine, last and last.”

Imtiaz Dharker, who won the Queen’s Gold Medal for Poetry in 2014, echoed Jackie Kay’s words:  “Growing up I believed that the world would only get better, because people like Martin Luther King were speaking up for us. Even his dying didn’t change that … we would learn from our mistakes. But we didn’t seem to, and things have got worse, I think.” Her poem in the anthology, ‘Looking away from Lucky Boy’, says: “Welcome milk-and-honey cup has soured / to poison, open arms turned prison, / freedom map has lost its roads.”

Sarah Howe was born in Hong Kong, and her first collection won the TS Eliot prize in 2016. She spoke of Hong Kong’s pro-democracy movement, and how the film Selma about Dr King and the US civil rights movement was not shown in China, but “only in Hong Kong, where the parallels were not lost”.  Her anthology poem ‘Window’ is about the US whistleblower and fugitive Edward Snowden, who hid for a while among refugees in Hong Kong.

Major Jackson, a US poet and professor, said he was “immensely moved” to be reading in the same hall in which Dr King spoke. He lamented that that the “pendulum seems to have swung in another direction” and referred to today’s “state-sanctioned killing of unarmed people of colour, particularly people of colour”. His poem ‘On Disappearing’ begins: “I have not disappeared. / The boulevard is full of my steps. The sky is / full of my thinking.”

All year Newcastle has been holding events in celebration of Dr King’s 1967 visit, and rebranded itself as Freedom City 2017 in his honour. On Monday a statue of Dr King was unveiled in the university grounds. At Newcastle Central station, as I was waiting to catch the London train home, the station Tannoy interrupted its usual timetable announcements to mention the anniversary and the continuing fight against racism. A remarkable moment.

On Saturday Jackie Kay said it had been an “electrifying and thrilling evening”, and added, with an irrepressible giggle: “We mustn’t let our spirits be squashed or defeated by a man with orange hair.”

Indeed not. And for real electricity – and poetry, too – watch Dr King’s 1967 speech in Newcastle here.

You can also watch the video of Saturday's launch here

and listen to a discussion on poetry's role in protest that took place at the university earlier in the day, and was broadcast on BBC's Radio 3

'As the world gets ready to start all over again again' ►