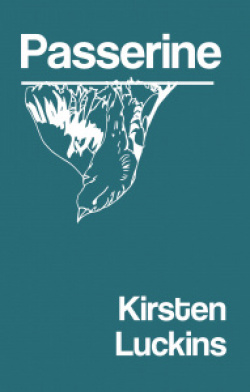 There’s no shortage of bold and innovative poetry coming from the UK right now, but you won’t read another collection like this one any time soon. Passerine is delicately defiant, powerfully intricate; playful, and masterfully crafted.

Even the contents listing knocks you for six. Fifty-one poems arranged into separate segments, but all bearing the exact same title: ‘Dear Sophie’. It instantly reminds you of the unrelenting pangs of grief which never wait for an appropriate moment or tiptoe out of the room when they can see that you’re not prepared to deal with them.

This collection is the smile that breaks out across tear-stained cheeks. Or that moment between your morning alarm and you switching it off when you’re not quite sure what’s real and what’s not.

Kirsten Luckins is a poet, performer, and spoken word theatre-maker based on the north-east coast of England. She is artistic director of the Tees Women Poets collective, and her work in taking poetry to the stage is based on 10 years’ experience working as creative producer for national performance poetry organisation Apples and Snakes.

What I love is that you have absolutely no idea what each fresh page will bring. Luckins’ experimentation is mesmerising. It manages to capture every fleeting mood, every lost trail of thought, every acute observation, every struggle, and every resolution. And this forms such a vivid expression of the internal monologue that’s almost become our primary form of communication since the pandemic. It’s a perfect demonstration of how our mind wrestles with itself:

My mind flurries about within the walls of my

Throughout the collection, the sharp contrast between poetic imagery and razor-sharp quips is a real joy. Subtle humour which makes you chuckle, only to double back with the deadpan delivery and make you gaze up at the bigger picture:

Along the back fence, the roses turn as brown as washing-up

foam slurried with grease. But the gothic oxalis has decided

to thrive, and the fuschia is churning out ballerinas. I read a

trees, which is nice, but who will pay the electric?

And the quips fall perfectly alongside beautiful self-deprecation:

If only I could fly, I could grab a handful of those clouds

to knit a baby’s blanket. If only I could knit.

That’s not to say that the collection relies on the humour – far from it. It’s just another indication of how powerful and versatile Passerine is and how well balanced the tone is whilst dealing with grief.

The commentary on the constant morphing of the clouds focuses our attention on details which are so vivid to us and yet so untouchable. And it reminds us – as grief so often does – that death is inescapable, no matter where we look: a decapitated wren, a drowned spider, our mothers’ fears.

As a poet, it’s the kind of collection that both excites you and terrifies you at the same time. Just when you think you’ve read the best line, another one casually knocks it off its perch. There’s a poem about sunspots and clouds which I had to read half-a-dozen times before I could move onto the next one. And then this gem:

I thought I saw a distant campfire in

the thicket by the bookshelves, but it was only the TV’s standby light.

There are also frequent references to Europe which, in the current political climate, feels as distant as the clouds. The fact that Luckins lives by the sea on the north-east coast enhances that sense of something being directly in your line of sight, but painfully out of reach. And just to erase any doubt that a sense of loss and distance from the continent was intentionally implied, we get this:

Last night I made a soup so thick it gobbed at me, like that bald

gammon at the bus stop the day we were meant to Brexit.

I copied and pasted about twice as many quotes as this but had to force myself to delete them. I don’t want to give too much away. But in short, this collection is astoundingly good. In a world that’s shrouded in darkness and uncertainty, it provides a flickering of light to guide you through.

Where it raises an eyebrow at the faults and contradictions of the world, it does so with unflinching vulnerability. And as doom-scrolling and government briefings dominate our days, this collection reminds you to go outside, take a deep breath, and spend a bit of time with nature. I’ll leave you with one last line, from the final poem, which I couldn’t resist including.

At North Gare, something rises in me as elementary and

banal as a skylark over a golf course.

If that doesn’t pull you in, I don’t know what will. One last note, about the publishers. Before the pandemic, Bad Betty were doing wonderful things on the UK poetry scene – particularly the ‘alternative’ strand which is generally known as ‘spoken word'. But since the pandemic, they’ve flourished to become one of the most vital independent poetry outfits that we have.

Their bold, dynamic and diverse publishing produces some astonishingly good publications. And their virtual events have meant that the readers’ connection with the poets hasn’t suffered as a result of the lockdowns. Jake and Amy are two wonderful people who deserve every plaudit that comes their way, and as Passerine  clearly demonstrates, they’re up there with the best in 2021.

A cracking review, Matt, of what sounds an intriguing collection.