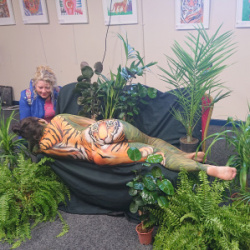 The visionary poet and painter William Blake only lived in the Sussex village of Felpham for a couple of years - just enough time to begin writing Jerusalem and to be cleared at Chichester assizes of assaulting a solider and uttering seditious expressions against the king. But it was quite long enough for the arts community of nearby Bognor Regis to commemorate him in the 21st century with a festival featuring art, music and poetry in the seaside town.

William Blake was a committed Christian who was nevertheless hostile to almost all forms of organised religion; he was influenced by the ideals and ambitions of the French and American revolutions, but later disowned many of his earlier political beliefs; he was critical of the marriage laws of his day, and more generally of traditional Christian notions of chastity as a virtue. The least that most people know about him is that the words to England’s unofficial and inspirational national anthem Jerusalem are his, and he also wrote the poem ‘The Tyger’.

Blake said he saw visions throughout his life. In a letter dated 21 September 1800, he wrote: “Felpham is a sweet place for Study, because it is more spiritual than London. Heaven opens here on all sides her golden Gates; her windows are not obstructed by vapours; voices of Celestial inhabitants are more distinctly heard, & their forms more distinctly seen.” 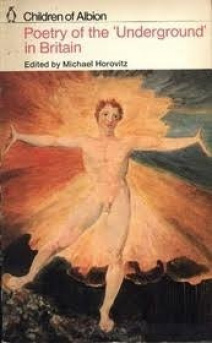 Poets in the late 20th century revered Blake as a seer and revolutionary. In 1969 the American Beat poet Allen Ginsberg recorded an album titled Songs of Innocence and Experience, on which he sang sections of Blake's illustrated poetry collection of the same name and set them to musical accompaniment, performed with jazz musicians. That same year the English Beat poet Michael Horovitz published Children of Albion: Poetry of the ‘Underground’ in Britain, with its cover illustration a detail of William Blake’s painting knows as Albion Rose or Glad Day. Horovitz introduced a long Afterwords section at the end of the anthology with a description of how discovering Blake ”turned my displaced and under-graduating scholar gipsy’s head”.

All this background and more was covered by Dr Luke Walker in one of three talks at the Blakefest 2019 festival. In Blake & British Counterculture: Poetry, Politics and the Children of Albion, he showed how much William Blake chimed in with the spirit of British 1960s radicalism. Later in the day at the festival there was a fine example of 21st century radical poetry, delivered by longstanding political poet Alan Morrison.

Morrison was introduced by compere and fellow poet Barry Smith as “the Bard of Bognor Regis”. He may or may not relish this title, or indeed being linked by me to another South Coast radical poet Attila the Stockbroker, who hails from Southwick, near Shoreham, not far away. What is it about living by the Channel that makes poets so angry? 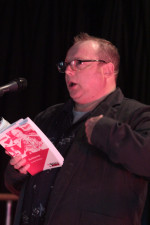 Not too hard to find the answer these days, perhaps. I’ve been aware of Morrison’s poetry and stance, ever since I reviewed his anti-austerity but pre-Brexit anthology The Robin Hood Book some years ago for Write Out Loud. It’s a measure of the current manic political climate that today his passionate if sometimes lengthy poems do not sound very radical at all, but eminently sensible and reasonable. The title poem of his new collection Shabbigentile  has a particularly recognisable voter bang to rights.  I’ll say no more. No, I will. Morrison often delivers interesting and quoteable lines, such as his examination of “the tipple of the proletariat”, where “baristas and Corbynistas rub shoulders”  … “Whoever would have thought that a bitter brown brew, / Arabic ambrosia, could come to undermine / Democracy, make us accommodate complacency?” If we do have to be out on the streets soon, book Morrison for a few readings. 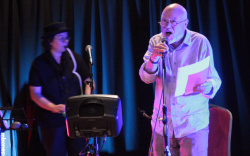 Saturday’s poetry was organised by the South Downs Poetry Festival, of which Barry Smith is director. It provides a rolling programme of poetry events throughout the year. Smith’s own poetry contribution involved a fine collaboration with Charlotte Glasson’s jazz trio, which included veteran guitarist Chris Spedding. His poems included one about a clowns’ convention in Bognor - “it’s just a bit of fun. Although now I wonder about its political overtones.” The fusion of poetry and jazz was often near-perfect, particularly in poems about legendary bassist Herbie Flowers’ role in Lou Reed’s Walk on the Wild Side, and another about a Paul Klee painting that transmuted into powerful and moving lines about the Holocaust. 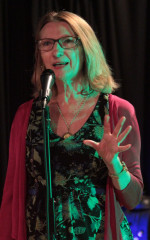 The half-Romany poet Raine Geoghegan provided a fresh perspective, with her poems of eating and cooking hedgehogs, memories of the hop fields, being moved on by police, a blackthorn stick traditionally held by someone dying and their youngest relative, moving into a new council house, and a horse called Mad Alf that had been employed on the battlefields of the first world war. At the end of her reading she said passionately: “The Romany language is so beautiful.” Flicking through her collection Apple Water: Povel Panni, I constantly came across words that I was familiar with, but had not appreciated where they orginally came from.

There were other, enjoyable readings from poets Mandy Pannett, Andy Brown, and James Simpson during the afternoon, with Barry Smith and James Simpson rounding up the poetry proceedings with a joint reading of ‘The Tyger’. A fluffy tiger had kept vigil, lying beside the microphone stand throughout. Other music acts at the festival were Song Box, Lucy Kitchen, Noah's House Band, and Sirens of Titan.

And there were tigers everywhere. The message of Blakefest 2019 (all events “made possible by the Bognor Regis Business Improvement District”) was “Let Your Imagination Run Wild!” That included lines from ‘The Tyger’ in shops windows around the town, for children to track down. In Studio 1 of the Regis Centre, close to Bognor’s seafront, there was an exhibition of impressive tiger art created by those attending creative art classes organised by the Aldingbourne Centre, a local charity. And later in the day body artist Elissa Barrett’s live installation of the big jungle cat certainly turned heads.

There is a determined campaign to provide a lasting memorial to William Blake in Bognor. Vincent Gray, who has already sculpted a life-size statue of John Keats in Chichester, is keen to erect a statue depicting Blake’s Albion Rose/ Glad Day – see the Children of Albion cover - on the resort’s seafront. That would be a fine thing to see, in the town where I spent the summer holidays of my early childhood, as it happens.

Poems from the Borders: ed. by Amy Wack, Seren ►

Sorry I couldn't stay for the evening's music, but thanks to you and the rest of the team for a great day's fest, Rachel. You do William Blake proud. I really enjoyed writing this article, and hope to come back next year. And do let us know when that statue eventually goes up!

"We, as a team in our 7th year of providing these celebratory arts festivals in Bognor, are so delighted with your review which captures EXACTLY the experience we aim to bring to the audience /viewer/participant. We have grown as an organisation during this time and are always looking for feedback or suggestions to enable us to improve what we provide. Thank you for confirming that we are on the right track. Please feel free to contact us on (email contact) if you have anything else you would like to add or if you would like to get involved in, or receive information about, future events. - Rachel Searle - BlakeFest Director"

Thanks for reading, Julian, glad you enjoyed it. Earlier this month I felt goosebumps when I heard Jerusalem - and I Vow to Thee My Country - sung at a funeral at an isolated church in the middle of the Norfolk Broads. I see Jerusalem has just been voted the nation's no 1 hymn in a BBC Songs of Praise poll.

Great, really interesting, review Greg. I wish I had been there, seeing the world in a grain of Bognor sand.