National Gallery, Picturehouse, LSE: but who are the poets on the picket line? 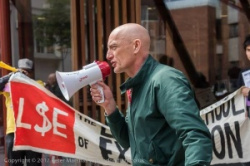 While visiting the Poetry Book Fair in London’s Conway Hall last month, we bumped into poet Grim Chip, pictured, one of the driving forces behind Picket Line Poets. Write Out Loud is always interested in people who take poetry to unexpected places, so we asked Chip to tell us more about this collective, and what it is they do ...

Who are the Picket Line Poets?

A squad of poets who turn up on picket lines and read poems to strikers and their supporters. It's Poetry on the Picket Line, officially, by the way. If you want me to name names then it's fair to say that Janine Booth, Tim Wells, Michelle Madsen, Matt Abbott, Nadia Drews and Mark Coverdale have all done their bit. David and Lizzie Turner, from Lunar Poetry Podcasts, have always been there for us too. That's not an exclusive list and we are always looking for people to join in.

What’s it all about?

It started during the long-running dispute at the National Gallery. Trafalgar Square isn't a bad place to stage an outdoor poetry gig but, to be truthful, a couple of us just got bored with speeches and started reading poems instead. People liked the idea, and it grew from that. When we put a gig on – outside the gallery – it went really well. It coincided with the day the management finally agreed to terms, so we spun it that it was the poetry that won it. It was about much more than that, of course – 111 days of strike action, apart from anything else! Word spread, anyway, so now we've done work with other PCS (Public and Commercial Services union) disputes, mostly in the culture sector (but also at the Equality and Human Rights Commission), the junior doctors, the cleaners' strikes at LSE and SOAS, the Bart's strike and the current Picturehouse cinemas dispute.

What do you do, and why does it matter?

Well, we do what it says on the tin. We turn up at pickets and demos and read poems – with a mic, without a mic, through a bullhorn, whatever. Pickets are usually pretty pleased and surprised to see us. They appreciate the solidarity, and some of them even appreciate the poetry! Plus, it's unusual. So pictures get taken and videos get made and shared on Facebook, Twitter and other social media. That helps raise the profile of the dispute (which, in the case of something like the current Picturehouse dispute, where there's a boycott of the cinema chain, is vital), and it helps to raise the profile of the poets too.

Then, when we do gigs we talk about the work, pass the hat round, sell our T-shirts, and the money goes into various strike funds (we've handed over more than a grand this year). It matters because it brings poetry onto picket lines and picket lines into poetry. Real people connecting with real poetry in the real world. That's got to be a good thing.

What kind of response do you get from pickets?

A great response. Better than any of us ever expected. But then, if you're standing outside in the cold handing out leaflets for an hour or so, listening to the usual speeches, then we come as a bit of light relief! Poetry isn't everyone's cup of tea, of course, but we try and keep it entertaining and relevant. Some people really like it though, and we've had people asking for particular poems both at gigs and at demos.

Have there been any particular highs? Or lows?

The highs? Loads of 'em! I think the junior doctors were always a bit bemused by us, being a bit posh and not knowing what to expect. Me and Turner at St Mary's, Praed Street, early one morning comes to mind, in that regard. Very amusing. The victory drink-up for the LSE cleaners, when they wouldn't let us leave the pub without reading some poems, that was a bit special.

The lows? Stand outside in the rain for long enough, watching people cross a picket line, trying to read poems without a mic over the roar of traffic – that might put a bit of a dent in anyone. We're pretty resilient, though.

Spoken word and poetry seems to have been enjoying its 15 minutes of fame of late. How do you see that? Has it had any impact on what you do?

Got to be a good thing, overall. Always a danger of a backlash, of course, and there's a bit of a risk of quantity swamping quality. The more the merrier, though, generally. Hasn't really had any impact on what we do, though I'm a bit surprised we don't get more of the new breed beating a path to our door. I suppose people 'get it' a bit quicker when we show up, having heard about 'spoken word' but then again a lot of our poets are doing very much their own thing anyway. If any of the squad are getting work off the back of it, then so much the better. Some of us have been around for a while, anyway, and we ain't planning on going away any time soon.

How do you see Picket Line Poets developing?

Well, something similar has started up in south Wales (quite independently) and we'd hope to get something similar going up north. We had a good chat with Joe Solo when he came down to do a benefit with us – got him to do his first ever poetry set (he's a brilliant singer/songwriter) – and the people who get involved with his We Shall Overcome work might well pick up on it.

But the beauty of it is that it doesn't take that much organising. I turned up at a picket just last night, on the way home from work, and they asked me to do a few poems. So I did!

We're going to put on a few benefit gigs, maybe put out a book of poems, flog badges, T-shirts. Raise money, spread the word, show solidarity. That's what it's all about really. There's likely to be a big push on public sector pay over the next year, so we'd expect to be pretty busy. If anyone wants to help then they can find us on Facebook or on Twitter.

Anything else you want to tell us?