The public and the personal: reasons why Laura Taylor looks back in anger 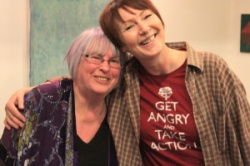 Laura Taylor is angry … you can tell that from her T-shirt.  But where does her anger come from? You can find more than a few clues in her poem ‘Dear Margaret’, written shortly after the death of former Conservative prime minister Margaret Thatcher on 8 April, 2013.

‘Dear Margaret’ talks about public events such as Orgreave and Hillsborough during the Thatcher years that changed Britain, “for rejoicing in the burning and drowning of men”, and then it gets personal – “For my dad, ex-Services, thrown on the dole / fifteen times in as many long months / … For my mother, dug deeper in poor mental health; / the poverty making her sicker, and sadder, / and madder / …  For the youth of myself, for the public disgrace / of the free-dinner-queue / … For all the above, for all our lost years.”

The anger is heartfelt. "I'll be doing that poem for the rest of my life," she said. ‘Dear Margaret’ is included in Laura Taylor’s Kaleidoscope collection, published earlier this year, and here was this north-west poet down in London to promote it, along with her guest poet and friend Joy France. These two magnificent performance poets cut their teeth at the Tudor House hotel in Wigan – and we at Write Out Loud have always regarded them as part of our poetic family. Laura has even paid tribute to this website for providing “a warm and welcoming place to write and develop” in her book. I'd never seen Laura perform live before. 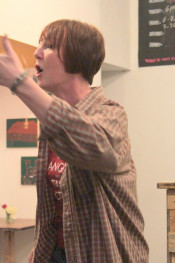 First stop on Laura and Joy’s mini-tour of London  - and her first gig down south - was the Pound Cafe on Brixton’s Atlantic Road, where it was standing room only at one point. Any immediate sign of a north-south divide? “It’s not as warm down here as I was promised,” Laura protested. “So I want me money back already.”

And what else, apart from Margaret Thatcher, makes her angry? Bankers, Donald Trump, the cost of HRT medication, the exploitation of call centre workers, society’s expectations of women … She prowls the space, sometimes in your face, her face filled with rage. Yet it is a controlled anger, the emotion and passion often expressed with dramatic and effective pauses.

In ‘Blood Money’ she protests at “the privatisation of collective menstruation …  to bleed or not to bleed / is not an option for half the population.” ‘Fault Lines’ includes a plea to be kind to exploited call centre workers – her daughter is one of them:  “Let’s try to narrow the divide / because we both lie / on a fault line / and we’re all in this together.”

This sense of common humanity within her poems can also produce warmth and tenderness. ‘I used to Call him Grandad’ is about an elderly neighbour she used to visit often as a little girl: “Seamus Rimer lived alone / at 84. / A door ajar / to let in light.” Her anthologised poem about the picture of  the little boy washed up on a beach in Turkey that shocked the world and forced politicians to act is gentle and moving, too. Laura Taylor can whisper as well as shout … a kaleidoscopic poet, indeed, and one that delighted her audience in Brixton. 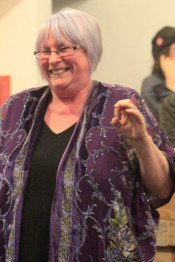 Laura introduced guest poet Joy France by warning us to “expect the unexpected”.  Joy – “it took me half a century to discover performance poetry” – was a teacher until two years ago: “Now I do this, and have adventures all the time.” I’ve seen Joy perform her poetry on several occasions, but have never before caught her full set, and was bowled over by its exuberance, fun, and generosity; she wants her audience to have just as good a time as she is having.

The fun and games in Brixton on Friday night included recruiting audience members to wear Donald Trump masks in a Nellie the Elephant-style singsong; enlisting a chap from the audience to don her toaster hat while she got the hots “for those extra-long slots”; and delivering an “anti-slam” poem in praise of Pam Ayres which has won her a place in a national final in London.

Her poem, ‘My Mam’, is skilful, rich, and warm. She talked of her work as creator in residence at Afflecks in Manchester, and how a suicidal man who wandered in was moved to tears, and to think again, after one of her poems: “We can have a laugh with poetry, but words are really powerful, and can change lives.” She also read a poem about the Aberfan disaster - her first poem, written when she was aged 10. Joy turns 60 next week, she told us, and is still compiling a list of things she wants to do before that milestone is reached. Happy birthday next Wednesday, Joy.

In keeping with the democratic spirit of the evening, three open micers were each allowed a generous amount of time to kick things off. First up was housing officer Martin Togher – now where have I heard that name before? – recounting strange tales from the social housing office in his collection Memory, Loss and Longing. Another open micer was Paul Point, who hosts two regular poetry nights in London, including the Chocolate Poetry Club in that very Brixton cafe. His poem ‘4.44’ about a journey into Peru included a memorable line about a silent taxi driver and his expert knowledge of the roads. In between Martin and Paul was an older bloke who spent the rest of the time scribbling notes and taking pictures; he read a few poems about this and that, mostly about trains.

Before the poetry began we were introduced to Chinese artist Liu Huiting from Beijing and Chelsea College of Arts, whose exhibition Only the Memories Remain currently adorns the café walls. Truly an eclectic evening, with a lively cafe audience, people wandering in and out. Next stops on the Kaleidoscope tour for Laura and Joy were Housman’s Radical Bookshop on Caledonian Road, King's Cross, at 6.30pm on Saturday 22 October, and the Ivy House in Stuart Road, Nunhead, south-east London, on Sunday 23 October at 7.30pm. Entry free at both venues, with a limited amount of open-mic spots available at each event; to book one of these spots, email Laura at laura_w_taylor@hotmail.com.

Another stab at the charts? Roger McGough teams up with Little Machine ►

Cheers Julian ? Was a fantastic experience - deffo doing it again!

I am delighted but not surprised at your success darn sarth, Laura and Joy; and by the fab review, Greg. Jealous that you were able to attend. Do you get all the best gigs down there?

London loved you Laura! Enjoyed my comeback too!

Glad you and Bob and Joy had such a good time in That London, Laura - and thanks for a very generous open mic slot in Brixton. It was a great night in the Pound cafe - hope to see you again soon.

Aww, great review and photies, thanks Greg ? We had THE best time in That London. Venues rammed, everyone so kind and friendly and generous, LOVED Brixton, felt just like home to us ? Thought your poetic delivery excellent btw - everyone else seemed to agree ?

It totally surpassed our expectations, and we fully intend to return, hopefully in the Spring!