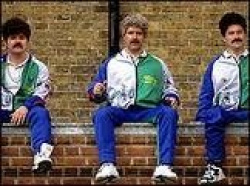 How could a name be prettier?

You’re up there with the Chardonnays

Once kiss from you my lips enflame

To pass you by it causes pain

you burn your name into my hide

you penetrate me deep inside

one look from me into your eyes

No name on earth is prettier

Sister to that Gonorrhoea

or best mates with Hermione

It has to be a travesty

That you should be an STD

Much worse than that the fact, for me

That Wigan you should choose to be

Your hotbed, capital and home

In all of Europe, nowhere worse

As ill afflicted by your curse

And yet to me it seems quite clear

That someone’s tried our name to smear

Stats and facts, not thongs methinks

There’s more to this than meets the eye

Some wools been pulled and someone’s lied

I have a crafty inkling that

I know the source of all the crap

Suffice to say that as a rule

All bad roads lead to Liverpool

That Mordor with no northern lights

Whose men-folk venture out at night

Dim, dark riders on a mission

Those naughty knaves, those cheeky chaps

In search of class and fresher flaps

Why even now, right as I speak

They’re lining up along King St

Defrocked, then knocked up in great haste

To later curse and rue the day

They ever clapped their eyes upon

Those scousers boys from Babylon

How does a girl get riddya?

Expunge herself of such a man

Let’s conjure up a cunning plan

Town planning on a wider scale

Build ourselves a great big gate

The junction where it meets M6

Or better still connect it to

Some junction on M62

Their men folk made to have a dose

Out for a fuck and a sticky wicket

Howzat for a googly pair of knackers

Yorkshires innings out for jaffas

Underground and tubes both blitzed

Or maybe we should think more global

Peace to all, a prize most nobel

Night drop them into Libya

Stealth missiles on a smaller scale

Germ warfare with a scouser tail

United Nations off the hook

Gadaffi routed by a fuck

Embassadors that spread good will

More efficacious than the pill

Send emissaries off to China

Acquaint them with the scouse vagina

No need to strangle girls at birth

Decide so young a woman’s worth

We’ll sort out their family planning

Make scoursers saviours of the nation

Then when we’ve set the world to rights

When Wigan’s free of parasites

Our girls are free to strut their stuff

Without the fear of mangy muff

Restore the goodness of our name

The roads stretched out to Wigan Pier...

Only just caught up with this, Isobel. Very funny and pure brilliance. xx

Wow! I had to share on Facebook. I'll infect all my friends with Chlamydia! In poetry form, of course.

Hilarious and well thought out-wonder if I can get some poems out of my various afflictions; hmmm....

Absolutely fantastic....and to see and hear you read it! Superlative! Perfection in rhyme and rhythm....fantastic ideas and images. Just loved the Tolkien reference and the journey round the world ending, so appropriately at Wigan. You can't read it too often!!

...such a pretty name...and you're only scatching the surface!

Some of the old Tin Pan Alley songsmiths would
have been at home with the rhyming. Very funny
and imaginative in equal doses (oops!

Hi Isobel, I think you might be asking a lot, but enjoyed reading this, well put together and made me smile, only had the one STD test, thankfully it was clear, all the best Jeff X

Awww thanks for your comments folks - glad to hear your son liked it Stella. I like to write some light hearted stuff that can connect with a non poet audience also.

The poem was written 6 months ago,inspired by daughter coming home from school after a sex education lesson at school. It shocked me to hear that Wigan was one of the worst places in Europe for the complaint...

My favourite part is the pop at China for its human rights abuse. Beneath the humour there is actually a lot of anger, which I do feel when I perform it.Peace to all ;-) x

Oh I def want to see this performed live Isobel... :D just played it to my youngest lad who thought is was brill .. (although he said it was slightly rude) he is 21!

Risque, but very well written. Oddly for me the funniest parts are the lateral references to the motorways, which I found unexpected and hilarious.

I am very defiantly against defending cities against humour!

Liverpool is a great place, but it has its problems like anywhere else. I could go on all day about the great things (so many of them).

But one of the bad things is, that as a city that has taken a lot of real hard knocks; its people sometimes get into a siege mentality, and feel a need to defend the city. Become defenders of the city.

Truth is the city does not need defending; least not from light-hearted banter.

I was once hammered by someone on this very site who said don't critisise my city; simply because I wrote a light-hearted article. That person got banned for making abusive comments which was a pity. Critically they did not ask/understanding that Liverpool was my city too, and I was merely pointing out the good and the bad (the true picture via satire).

I also saw one person pulled off a poetry stage/night very abruptly in Liverpool. I know the reason that happened was because they supposedly offended the compare's sensibilities concerning Liverpool girls as mentioned in a poem Welsh poem. It was a terrible thing to see- not acceptable.

Free speech is key to poetry, without it, it is severely limited. Besides Wigan, Liverpool, London, Bognor Regis, etc, they'll all still be standing afterward as will the people- just fine banter or no banter.

Ive seen this performed several times Isobel and it never fails to make me laugh! Its not only funny but very very clever in its composition and rhyming patterns.
I have many Liverpool and Skemersdale friends and without exception their wicked sense of humour and warmth of character enable them to be able to take a poke at themselves {so to speak} without taking the knock!!
Good job you put it up now cos with Gadaffis head being somewhat out of the picture your gonna have to change that line!!
Cate xx

Tour de force, this, Isobel. I got a bit lost somewhere up the M6, but then, as a bloody southerner, I would.
PS I used to know a Scouser who went to uni with Harry Enfield in York. He bore a remarkable physical resemblance to those three characters on the wall.

I suppose we all have a different sense of humour. A posh lady called Joy comes to the Tudor and regularly takes the piss out of Wiganers and we all laugh and woop it up. Her poems are witty and well thought out and Wiganers don't take themselves too seriously, much like many scousers I've met :)

As an aside, one of the funniest sketches I've seen was about Yorkshire Airlines - I must send it to John Coopey - the stewardesses splatted everyone with mushy peas and it only flew as far as Yorkshire... Alas Smith and Jones were also brilliant when they did that sketch taking the piss out of Northerners hating Southerners...

I think that if comedy gets too safe and too pc, it ceases to be funny.

You're not fooling anyone - About time you posted that. Excellent!
I once knew a lady called Lydia....

Now you mention it, Skem is full of scousers and at the foot of the M58. Darn it - it's also riddled with B roads...

Very clever - it was brilliant performed and works very well on the page too.

However (in outraged Liverpool defence mode)

can we blame Skem?

ahh the meter makes me happy <3

what makes me even happier is the blame being on Liverpool. Mancunian to the end.

and i agree, i saw the title on the blog list and thought "chlamydia? it's actually a pretty word."

but then anything ending "-mydia" is pretty. shame about the definition.

Terrific, Isobel. It's great to read something clever and funny. The Underground and Tube line is first class. The whole thing is brilliant and deserves a big clap.

No-one seems to have noticed the disciplined and faithful iambic tetrameters. (Probably too busy scratching themselves).
(But I did - notice, I mean; not scratch).

I understodd all the stuff about cricket. It's the genital geography I don't know my way around.

Darn it - can't I get anything right? Lol - I was hoping you might like all the Yorkshire bits - I had to do a bit of research for all those cricket terms! xx

Isobel - you titled it Chamydia.
Was this a slip of the tongue?
Very good! Luvverly rhymes like "riddya".