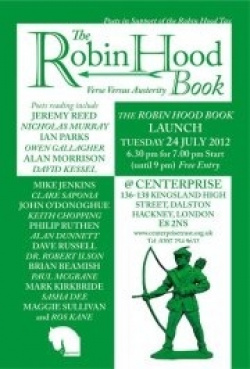 This is a big, important book, coming at a time when the national inclination is to boo George Osborne, to his great astonishment, at the Paralympic Games. Its rallying point is the campaign for a Robin Hood, or Tobin tax on financial transactions, and follows last year’s radical anthology, Emergency Verse. But, as editor Alan Morrison is happy to point out, inevitably its sweep is far wider than that, prompted by a “wide range of political convictions: socialists, communists, anti-capitalists, anarchists, Greens”, and its underlying ethic being defence of the welfare state. Interestingly, within its pages is also a polemic about the state of poetry in Britain today, which takes in last year’s big bust-up at the Poetry Society, and the Poetry Book Society’s acceptance of sponsorship from a hedge fund.

But what of the poetry in the Robin Hood Book, which is subtitled Verse Versus Austerity? The more immediate subjects are covered, obviously: last year’s riots, MPs, bankers, affinity with the poor and homeless, but also brass bands, national parks, immigration and integration, teachers, and dragons. Rats crop up in surprisingly large numbers. The tone is often that of defiance, whether outright or more muted but stubborn, as in Big Society, by Jo Bell:

“The Walkden and Farnworth Band strike up

and yes, they are fat and balding, with beer-wet lips

But so what? The poem celebrates the “pit music, factory music, punching out precisely

This is us, this is. Still here”

There is Victoria Field’s empathy with homelessness, and how it can creep up on the unsuspecting, in Sleeping Out:

“I was asleep one night

and didn’t see the crack begin.

I didn’t know that it would grow

so huge that I’d be left alone

sleeping out and looking in.”

Martyn Halsall’s Magic Shoes reflects on the closure of a children’s project because of the cuts:

“And the world shrank to the chippie and the Pound Shop.

And a nought was added to another Treasury spreadsheet.”

Mark Kirkbride has the sense of history repeating itself, caught in a time warp, in  Sometimes I Feel I’m Back In the Eighties, first published in the Morning Star:

and yet the word on everybody’s lips is

cuts, as everything’s halved, then quartered

and still it’s not enough. In the Eighties

Now all the battles fought and won

are there to win or lose again.”

There is an embracing sense of inclusiveness here. One hundred and thirty-one poets have contributed to the Robin Hood Book; as Morrison describes them, “established and up-and-coming names, and novices”. Those in it whose names have also cropped up on Write Out Loud to my knowledge include Andy N, Steven Waling, Cathy Bryant, Ushiku Crisafulli, and Rodney Wood.

And that’s what makes Alan Morrison’s polemic within the Robin Hood Book on the state of poetry so absorbing, at least for aficionados such as myself. With headings like “Emergency Ambulance Reoccupying ‘Auden Country’” and ‘Eliotology’: Poetry Will Eat Itself”, and prodigious use of capital letters, he suggests that any political anger that poetry’s elite might feel is largely confined to arts cuts and library closures. He is scornful of “poets not wishing to ruffle any feathers” by using “thick applications of figurative impregnability” and what he sees as post-modern evasiveness. That oft-repeated creative writing course dictum to “show, not tell” can get in the way when you want to get an urgent message across, and join a “once-in-a-generation literary cause”.

Morrison quotes the former Poetry Review editor, Fiona Sampson, warning in an editorial against “mob rule”. Perhaps she has in mind the “barbarians at the gates” that Write Out Loud’s founder, Julian Jordon, often portrays as this site’s ethos, not entirely tongue in cheek. Certainly Alan Morrison doesn’t mince his words. In his long poem Not Paternoster Square, he calls upon

“the nation’s blood is melting

To sealing wax and anger at bonuses for Robber Barons”.

The Robin Hood Book, unlike a number of collections of poetry, makes you feel included, not excluded. It is also the first time I’ve come across the glorious term “lumpenpoetariat”. Where do we sign?  Greg Freeman

The Robin Hood Book, The Recusant, £10 plus pp