Poetry Review in the 1980s: the golden years? 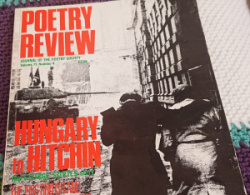 I always peruse the poetry sections of secondhand bookshops more in hope than expectation. And even at the renowned Barter Books in Alnwick, Northumberland, housed in a beautiful former railway station, it’s been my experience that their small poetry section isn’t much cop; at least, there’s nothing very modern. But on my latest visit I didn’t give up easily; and finally settled on purchasing two good-condition copies of the Poetry Society’s Poetry Review, from 1985, and 1986. And I was captivated.

There’s a dramatic picture of the 1956 Soviet invasion of Hungary on the 1986 Poetry Review cover, which is headed ‘From Hungary to Hitchin’. Inside is an article by George Szirtes, a poet who is much renowned and respected within the current poetry scene, headlined ‘A Dual Heritage’.

The headline doesn’t really do justice to the dramatic story that he relates. Szirtes tells of his mother, who lost all her family during the war, was a prisoner at Ravensbruck, and was “rescued at death’s door by the advancing Americans”. His father was a Hungarian government official. The first clue that young George had of trouble: “I had been given my first watch. There was firing outside. I felt a blow on my wrist and looked down to find a neat hole in the centre of my watch. A few days after that we left to move to a friend’s flat further out of town. The journey there was dangerous; tanks, corpses, disfigured bodies. I remember nothing of it now and can only report what my parents told of the scenes of horror we passed on the way. In any case I woke up every night for seven days after that, crying aloud.”

His family leaves Budapest on a crowded train, spend the night in a hotel, catch another train to Sopron, the nearest major city to Austria. They get off a couple of stops before, and a group of about 20 of them are guided over hills that were “sparsely mined” by a mildly intoxicated elderly man in the middle of the night.

They spend a few days in Austria before they are offered a flight to England. “We landed late at night, on December 2, at Heathrow.  A woman from the WVS was offering blankets and cups of weak tea. There followed a ride to a disused army camp where we were to spend the next few days … All in all we were well looked after and my first English was picked up from children’s books in the camp.”

He grew up in England in the late 1960s, “good times for being young. England, having recovered from post-war austerity, was going through a period of spectacular expansion and confidence, a confidence underpinned by irony and self-awareness. In music, in art, in fashion, England appeared to us to lead the world.” Szirtes goes on to talk about his poetic development: “I was in a very ambiguous position. My father and his friends regarded me as practically English, though my English friends persevered in thinking of me as Hungarian. Reviewers of my books rarely noticed that I was not English, and I was pleased about that.”

When he finally returns to Hungary, it enriches his poetry, “and the kindness of my reception there has given me some sort of confidence that I could develop a serious and major body of work, which, if it could not speak for Hungary directly, might speak for what the country has always aspired to be – a European country, living at the borders of a great tradition, but fully in sympathy with it, adding its own flavour and pathos to it, showing a dramatic, sometimes tragic faith in its own past and future, identifying with its humane culture, its body of literature and its store of suffering.”

I have quoted this article at length because I find it fascinating. For one thing, what an optimistic outlook, which was obviously still possible in the mid-1980s, and may not be so today in modern Hungary. For another, it is just the thing that you ought to find in a decent issue of Poetry Review, whether in the 1980s, or today.

Other poets featured in that 1986 issue include David Constantine, Peter Redgrove, Matthew Sweeney, Glyn Maxwell, Jo Shapcott (as winner of the National Poetry Competition), and Wendy Cope, a then-newcomer on the scene. There is an article about Seamus Heaney’s teaching style at Harvard, a review of the Collected Letters of Dylan Thomas, another of a collection by a very young Carol Ann Duffy, a competition, a cartoon, and letters, including one protesting about the use of the N-word in a previous edition. There is also a bizarre ranking of British and Irish poets into four divisions, a “fanciful league table” compiled by John Sheeran of Oxford University, in which Seamus Heaney comes out top of division one, and Brian Patten bottom of division four. Only about a dozen women poets are included in the 92 rankings.

The other, 1985 issue that I bought has the TS Eliot prize winner Fred D’Aguiar revisiting a Guyanese village as lead article, a review of prose by the second world war poet Keith Douglas, an interview with American poet John Ashbery, a prose piece by the innovative poet Ken Smith, an overlong review of a book titled Auden in Love, and poems by, among others, Jeremy Reed, George Macbeth, and Gavin Ewart, plus an Opinion piece by Fiona Pitt-Kethley on sexism in the poetry publishing world. These two editions of Poetry Review were both edited by Mick Imlah, the legendary poet and editor who died tragically young of motor neurone disease at the age of 52 in early 2009.

The current Poetry Review that thuds on to my doormat four times a year as part of my Poetry Society membership package is far weightier in volume than the 1980s Reviews, and of course, and thankfully, with far more diversity among the poets featured therein. In the latest Poetry Review there are plenty of poems, including ones by Paul Muldoon, Vicki Feaver, and Yomi Sode, and reviews, plus an Essay, a Lecture, and an editorial by Emily Berry. But although the 2021 Poetry Review may be much more inclusive, I feel that it has at the same time become somehow more exclusive - more highbrow, if you like. I look forward to an appreciation of Michael Horovitz in the next issue, to prove me wrong.

Maybe someone will find a contemporary 2021 issue of Poetry Review just as fascinating as I did the 1980s version, in another 35 years’ time. I’m sure they will.