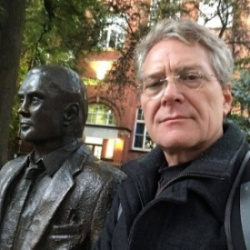 This week our Poem of the Week award goes to Randy Horton for his poem 'Confessions', a piece which mixes both comedy and candour, and what feels like a tip of the hat to Yeats in the final line. Our thanks to Randy for his responses to our Q&A, which you can read – along with the poem – below.

What got you into writing poetry?
I started writing as a stereotypically suicidal teenager with a copy of The Bell Jar at my bedside. After going off for a degree in literature, I sort of lost both my confidence and my interest in poetry for the most part. I only wrote poetry intermittently until I took early retirement and began again in earnest in 2017. I feel much freer to make mistakes and write bad poetry now than I did at the beginning of my career. In this sense, I think I’m also typical of older poets.

How long have you been writing?
As I said above, I started as a teenager. Over the years, I have worked as a journalist, technical editor, promotional writer, and academic. I returned to more creative writing in 2017, and I’m trying to just have fun as a writer, which wasn’t always the case in the past.

Do you go to any open-mic nights?
I facilitate the Write and Release group in New Mills, which has evolved to be more of an authors’ support group than an open mic, but we do read our work to each other. I also go to Stockport Write Out Loud, Spoken Passions in Ashton-under-Lyne, readings at Petersgate Tap in Stockport, Spoken Words in Buxton, Mashed Guru in Macclesfield, and Punk in Drublic, Word Central, Stirred Poetry, and Speak in Manchester.

Your favourite poet/poem?
On any given day I will give a different answer, but today I will go with “One Art” by Elizabeth Bishop.

You're cast away on a desert island. What's your luxury?
When I imagine this scenario, the only luxury I ever really think of is a toilet.

At the interview, she said,
“These are some designs I’ve been
Working on since I got out of jail.”

On his dating profile, he said,
“I’ve finished the last course of antibiotics
And feel I’m ready to date again.”

At dinner, she confessed,
“I listened to a Justin Bieber song to see what it was
And I ended up listening to the entire album.”

At the office sexual conduct training, he admitted,
“I once positioned myself in the audience
So that I could see Grace Jones changing costumes.”

And I feel I must disclose that
I saw you eating in a café,
And I wanted to break through the glass
To get to you as the door would take too long.

I wanted to be close enough to absorb
Stray electrons orbiting your body.
I wanted our consciousness to commingle,
So I could know all that you know.

I wanted to share your feelings of
Elation, sorrow, indifference.
I wanted eternity. I wanted permanence.

As your gaze rose, I started,
Coughed, looked toward the pavement,
And shuffled off, slack-shouldered, to the east.

The Enduring Appeal of the Sonnet Form ►

Great writing! In some offices they pat one on the (lower) back a bit too often!Jennifer

Brilliant, thought provoking and amusing poem Randy. A confession would be refreshing in a world of trumped up dating profiles and swiping left and right. Vulnerability should be a desirable trait. ? Google is the one true confessional I reckon.... One look at a search history would give away a lot. Well done on POTW.

it sucks
not the poem
the fact that you won
now I am jealous
and want to sulk
only sulking is not
any fun either
I confess I do not know
where to go from here
your poem started it.

I particularly liked the fifth stanza with its sense of desperation and urgency. I'm shocked to learn that there's really such a thing as office sexual conduct training. A well-deserved poem of the week.

I really appreciate all the kind words. Thanks, everyone.

Couldn't have happened to a nicer guy, massive congratulations from me Randy, very well deserved my friend, see you soon ?

Brilliant psychology sculpted with words underpinned with insight and humour. Deliciously over the top and yet grounded at the end with a sense of futility. I laughed spontaneously.

Great stuff Randy, I really enjoy your ways with words! Hope to catch up again soon.

Another great poem Randy. You seem to have a unique and gifted ability to be quite tongue in cheek with well crafted poems. Congratulations for a well deserved POTW. See you soon

Morning Randy. i enjoyed your poem as a start to the week - querky and tongue in cheek - though my bet is that we all fall into these mini-bear pits more often than we'd admit.
Peter T