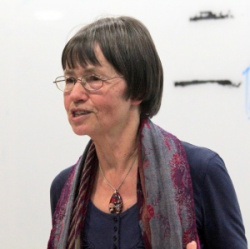 It was an extraordinary moment, for me, at any rate. Early on during a talk about a famous South Asian poet his words were read out in Urdu – and many of the audience began joining in, knowing them word for word.

Novelist and editor Marion Molteno was delivering a talk about the 19th century poet Ghalib, who wrote many ghazals, a series of couplets linked by strict metre and rhyme. She has edited a new edition of her mentor Ralph Russell’s work, The Famous Ghalib, The Sound of My Moving Pen, in which Russell selects and explains Ghalib’s verse. Russell was a pioneer of Urdu studies at SOAS (School of African and Oriental Studies) University of London, where the talk was held.

It turned out that I shouldn’t have been surprised at the audience’s eager participation. Molteno explained that Urdu poetry comes from a tradition of spoken poetry, and that many of Ghalib’s  verses have become proverbial, recited and sung wherever Urdu speakers have settled, and part of everyday life in the same way as phrases from Shakespeare are in English. Indeed, Molteno asserted that Ghalib would have been as famous as the Bard of Stratford is worldwide, had his words been written in English, instead of in Persian and Urdu.

Ghalib was a member of the Muslim elite in Delhi, at a time when the British were taking control of the country, and the Mughal empire was coming to an end. Molteno said: “He was terribly proud of his aristocratic background, and thought those taking part in the Indian rebellion against the British in the mid-19th century were riff-raff.” His own relationship with the British was ambivalent – he both respected them but also thought them “unbelievably arrogant”.

Molteno said that Ghalib was a Muslim but unorthodox – he drank, and didn’t fast or say his prayers. He hated ritual for its own sake, felt “profoundly” that everyone was his brother, and that all religions should be respected. He was arrested at the age of 50 by the British for gambling, and only one person visited him in prison, a Hindu poet.

And what about his poetry? As Ralph Russell explains in his book, Ghalib wrote almost all his Urdu poetry and a substantial part of his Persian poetry in ghazals -  a relatively short poem, comprising a series of couplets, each independent in meaning but knit together by a strict metre and rhyme scheme.

Russell goes on to say in the book that poetry in this tradition was first presented in a musha’ira, a gathering where poets assemble to recite their verses, sometimes in someone’s home, or as a large public event. “There is always an element of competition among poets, especially when – as was often the case in Ghalib’s day – the host would prescribe beforehand a half-line of verse which each of the poets attending had to incorporate in their own ghazal, with both metre and rhyme prescribed for them.”

Spoken word, if not a kind of poetry slam, in action. Ghalib’s ghazals included social commentary, love poetry, and criticism of fundamentalism and orthodoxies. Russell translated them selectively into idiomatic English. Here is a handful of them:

A straw on fire burns only for a moment

Can lust be equal to the tasks of love?

They offer paradise to make up for our life below

It needs a stronger wine than this to cure our hangover

Ghalib, the sound my moving pen makes is an angel’s voice.

Molteno’s most recent novel Uncertain Light includes Urdu and Persian poetry. She said her mentor Ralph Russell came to Urdu as an outsider, as a conscripted soldier sent to India. She added: “He is famous in India and Pakistan, but when he died there was no obituary in British newspapers, where he was just another academic.” She added that Russell was never made a professor at SOAS, simply because he was a lifelong communist.

In her editor’s introduction to the book, she says: “In his last years he talked of drawing on all that he had written over 40 years to produce one definitive introduction to Ghalib’s poetry. He knew he would not have the energy to do this before he died, so he explained in detail what he intended and entrusted the selection and editing to me. … I am one of the many people who would not have found my way to appreciating Ghalib’s poetry if it had not been for Ralph Russell’s engaging writing and his lucid translations.”

◄ What Survives Is the Singing: Shanta Acharya, Indigo Dreams

'the sound my moving pen makes is an angel’s voice'

WOW! What an amazing way to express it.

I made several attempts at ghazals in my early days on WOL. All failed miserably, under the patient eye of our then-resident ghazal expert, Mr Winston Plowes ?