The power of words: audiences flock to literary festivals and book fairs in India and Pakistan

A writer who is appearing at Wenlock poetry festival next month has spoken of her experiences at literary festivals in India and Pakistan, where audiences can number into hundreds of thousands.

Marion Molteno, pictured below, a former aid worker who will be presenting an introduction to Persian and Urdu poetry at Wenlock on Sunday 24 April, said: “Literary festivals in India and Pakistan are free: the result is that hundreds of thousands of people come, and it’s a hugely stimulating event for all.”

In the last few months Marion, whose new novel Uncertain Light includes Urdu and Persian poetry, has appeared at festivals in Hyderabad and Jaipur and at the New Delhi book fair, pictured, in India, and in Lahore in Pakistan. She added: “Jaipur was the original Indian literary festival on the current model. It started in a small way nine years ago, setting the principle of raising enough funds so that all sessions could be free.  Within a couple of years it had become hugely popular and has grown constantly. This year the estimate was 300,000 people over the five days. 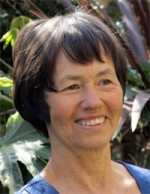 “Anyone can come. They encourage prior online registration to speed things up but people who don’t have access to computers can just roll up. They take security seriously, so everyone passes through airport-type entry gates, but once they’re in, people wander freely.

“Many other cities [in India and Pakistan] now have their own festivals. I think most have used the key aspect of the Jaipur model and are free. This is the essential thing to making it an aspect of popular culture, not just the preserve of an elite. I also had a slot in the New Delhi World book fair. There was an entry ticket but very cheap and hundreds of thousands wandered around, looking at books on all the different publishers’ stands.”

Marion’s most recent festival appearance in South Asia was in Lahore, where last-minute security concerns resulted in a frantic rejigging of the festival programme. But it did not dampen the enthusiasm of those that attended. She said in her latest blog: “Poetry is the most universally loved art form among Urdu speakers everywhere, and any powerful Urdu poet speaks to Urdu speakers wherever they live.

“The depth of this cultural passion is constantly surprising to outsiders - it’s rare to find an Urdu speaker who doesn’t know by heart swathes of poetry." She said that in Lahore there was such a crowd wanting to hear TV personality Zia Mohyeddin reciting from the great 19th century poet Ghalib that security guards had to deal with potentially unruly young men, desperate because they couldn't get in. "The organisers looked worried. Rejoice, I say - in how many countries do young men almost cause a riot because they can’t get to hear a poetry recital?”

Her novel is set in the mountains of Tajikistan where an Indian humanitarian worker is taken hostage. At Wenlock she will be talking about and reading the ghazals of the Urdu poet Ghalib, drawing examples from her newly edited book, The Famous Ghalib: The Sound of My Moving Pen, with translations by her late mentor and friend, Ralph Russell.