What Survives Is the Singing: Shanta Acharya, Indigo Dreams 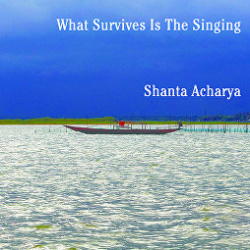 In her long career as a scholar and writer, Shanta Acharya has published poetry, literary criticism and fiction as well as business and finance works. Her seventh collection explores the vulnerability of humankind in well-crafted lines that meditate on tragic events that affect our being human, especially being born a woman.

As an Indian woman educated in the UK who studied at Worcester College at Oxford and then at Harvard in the US, she moves between two cultures in a variegated approach that opens to different viewpoints. At the centre of her most interesting poems are infanticide, abortion of baby girls, brutal rapes of women, honour killings and female genital mutilation. The souls of the victims cry out for justice: “Can you hear their screams?” the poet asks, voicing their stories and conveying their feelings.

Quoting from Brecht, Rilke, Dickinson and Elizabeth Jennings, Shanta Acharya bases her arguments in a wide literary context that investigates the uncertain and fragmentary essence of our being. Every time the world around us falls to pieces, we try to rearrange it. In ‘Strange Times’, she quotes Plato, who says that the person who tells the truth is considered a fool; nevertheless, “humanity never lets go, will not give up the ghost”, and what is left is the ‘singing/About the dark times’, as Bertolt Brecht remarks. Life, dreams and our future are our most precious possessions, according to Acharya, and we can perceive them through a crack that allows the “light to get in,/alter our vision, fire a revolution.” A transformation is therefore possible both in our view and in society. She quotes and refers to Shakespeare, Milton, Wordsworth, Shelley, Elizabeth Bishop, Leonard Cohen and Adrienne Rich, in order to support her arguments and develop her thinking. Using this technique of prose-like reasoning, Acharya tells us stories of poverty, abuse and dispossession:

How would I know there’d be so many men lusting

after the same thing every day, never a day of rest?

The bosses raped us when we slept, even when we bled.

My parents swore revenge as they pinned her down

on the settee, gagging her with a plastic bag.

Struggling to breathe, Shafilea fought back, her limbs

No, this is different. A most brutal and unkind cut,

she sighed as I caught sight of her excision –

her wound, her shame, her secret laceration.

The poet faces the issues directly, exposing the facts, hoping for a change, crying for justice in a reality that looks dark and hopeless. Suffering is mainly inflicted by human on other humans, but they also make animals suffer, and the environment is affected as well.

Memories and relationships are also the focus of Acharya’s poems. They are sources of renovation and love, dearly remembered and keenly observed:

with wild, forlorn calls awaken in me immortal longings,

making it possible to be in two places at once.

I am in Mathura, inside the temple of Krishna,

waiting for darshan. Outside, these proud defenders

of faith and grace teach us to be incorruptible,

our true colours as we dance to the music of humanity.

I came into this world with only my shadow,

wake unexpectedly to this rupture of being.

Past and present trigger a creativity that thrives in questions, in an investigation that is open to experimentation, as in the poem ‘Infinity of Red’, where research of sorts on the colour red opens up to a series of suggestions from ‘Maple’ to ‘scarlet’, ‘red roses’, ‘Juda’s hair’, ‘Red Herring’, ‘HIV’, ‘Cupid’, ‘Devil’, ‘Pretty Woman’, ‘blood on the streets’, ‘A newborn child wrapped in its amniotic fluid crying’, and many more. It is a list that invites us to think about the multifaceted reality that is enclosed just in a colour.

Questions about language and identity are also at the heart of some of the poems in this collection. Knowledge is often unknowing, and clinging to certainties might mean giving up venturing. According to Acharya, “not knowing what you don’t know” is something we need to be prepared to accept, and we should see that this “is a gift: what you know/a speck of dust barely visible in the fog.” (‘Not Knowing’).

Some poems are humorous too, like ‘Art Of Ageing’, in which the poet realistically suggests that “the trick is to relax, take off your mask./Stop worrying about things you have no control over.” There is an openness to life, and we should aim to live the last part of our existence in full, trying “all the colours … mix and match.”

In the last poem of the collection, ‘Lethological’, Acharya concludes her arguments in an open-ended way that comprehends human cruelties and fragilities as well as the joys of existence:

Lying in corpse pose, blank as an empty page,

I reach for words on the tip of my tongue –

centuries of prayers for justice when darkness descends and the

scream sighs ‘I am existence’

The poet bears witness “to the barbarism of human beings”, referring again to the many women who are killed each year. She is still uncertain and doubtful at the end of the collection; nevertheless, her heart is “enlarged with letting the universe in”, and she is happy to be alive. After she has explored the mysteries, atrocities and insecurities of life, Acharya concludes her collection with a positive tone that engages and enchants the reader with her vision of wisdom and profound humanity.

Shanta Acharya, What Survives Is The Singing, Indigo Dreams, £9.99

◄ The poetry of football (2): website has been 'swapping shirts with Shakespeare' for over 20 years