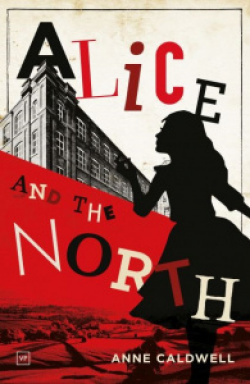 I’m no expert on the mysteries of prose poetry - but then, who is? Maybe Anne Caldwell, for one, for she edited a recent prose poetry anthology with Oz Hardwick that was published by Valley Press. .

Her own collection, Alice and the North, a themed sequence of prose poetry, is described as a “love song to the North”. It’s an entertaining and readable collection of vignettes, in which references to Hadrian’s Wall, Sheffield steel, Manchester, Hebden Bridge floods, and Saddleworth Moor are mingled with personal reminiscences, from childhood onwards.

Four sisters run wild in ‘Rust and Nettles’, while an ice cream man and a PE teacher – both probably dodgier characters than Charles Dodgson - lurk in ‘Congleton’. Family grief when a father dies is mixed with adolescent yearnings in ‘Crab Apples’. An early attempt to come to terms with her feelings about northern territory can be seen in ‘Slow Train North’, a railway journey from King’s Cross in which “that pull north is stronger than ever. The Pole’s magnetic embrace.” ‘Bedrock’ attempts to conjure up the essence of the north, during “a walk high on the moors … its people are millstone grit, shale and limestone … the air is quiet and thick as the first snowfall on the tops.”

The scene shifts, and Alice is temporarily transformed into a puma, padding through Salford, erotically intruding upon a sleeping photographer, an American with a Harley-Davidson and a Leica (‘Harleys and Gasometers’, ‘Trespass’), against a backdrop of Northern Quarter eateries awash with late-night clubbers fuelled with ecstasy and coke.

A student trip up the “crinkled coast” of Norway is vaguely remembered in ‘The Far North’, “the boredom of days at sea, sailing in and out of countless fjords”. Sylvia Plath and the possibilities of sex with a “beautiful Swedish man” man on the ship “with a paperback copy of Crime and Punishment stuffed in the pocket” are invoked (‘Midnight Sun’). In another poem set far beyond the Pennines, the poet is crossing time zones and Greenland tundra on a transatlantic flight, and dreams of “Franklin and his ship, the HMS Terror … found in pristine condition at the bottom of an Arctic bay”.

But more often Alice is to be found in English moors and valleys, amid Nidderdale rain, with no room for a man in her cottage (‘Antipodes’); the “sediment-smell” of flooded Hebden Bridge (“Her empathy is with these flooded northern people and places”);  and a burning Saddleworth Moor, bringing back memories of police searches for children’s bodies (‘Lost Sheep’).

‘Winter’ has an authentic flavour of one northern poet laureate, Ted Hughes: “Alice became Medusa – she was a line of Heptonstall venom, she was the Crags spitting, hitting her house through all the fire and felt and flags.” It has as its epigraph that line from Hughes’s poem ‘Wind’, “This house has been far out to sea all night”, whose influence can be spotted in so many poems. It is duly acknowledged here. There’s humour, too, as she thinks of Ted scoffing at “drones, bombs and the Lycra men cycling”.

‘Hardcastle Crags’ has lines from a Sylvia Plath poem of the same title as its epigraph, as another Yorkshire poet laureate, Simon Armitage, finds himself alongside his hero Hughes “and all those who have written in a blaze of red, thinking their fox was the only fox that mattered, its guts picked over by crows”. Alice takes a new lover on a tour of Heptonstall where they “witness Ted’s crows nesting, Sylvia sleeping, her grave littered with plastic flowers and pens”. Plath, an American poet who seemed to understand the north of England so well.

A child is born, “delicate as a young grouse picking his way through heather. She cradles him in wildflower meadows, wrapped in a felt blanket.” (Bird’s Foot Trefoil’).  The final poem ‘Wonderland’ attempts to remind us of the supposed if tenuous connection with Lewis Carroll, but is more effective as a powerful summary of what the north means to Alice/Caldwell, its variety and spices, “all pound-shops and chip-barms, three curries and rice please and fish-supper Fridays; it’s Yemen-in-Eccles and Halal-in-Bolton; Hockney-in-Saltaire and Hepworth-in-Wakefield.” The whole of ‘Wonderland’ deserves to be quoted, but I’ll just mention the final citation, of Dorothy Wordsworth, “fell-walking all weathers; unquenchable love for an obstinate brother. Her trailblazing, wonder-filled copperplate letters.” A pleasing reference, in Dorothy’s bicentenary year.

Robert Frost helped Edward Thomas to become a poet, by pointing out the poetry in his prose writings. Oddly, an increasing number of poets these days are turning to prose and regarding it as just another form of poetry. I read Alice and the North initially in two sessions, a sign that I enjoyed it and found it absorbing and understandable, which is certainly not true of all prose-poetry. These bite-sized episodes have a proper poetic music and rhythm, and this collection has vibrancy and life.