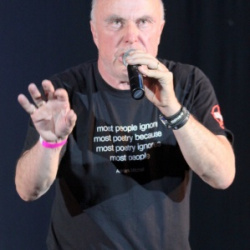 Back in the 1980s, Ranting poets were very angry - angry about the conditions that led to the inner city riots, angry about the miners’ strike, angry about unemployment, and a host of other issues. Now, in 2015, a number of them are still around, still angry - and taking part in an event supported by Arts Council England and the Heritage Lottery Fund. Stand up and Spit has been a series of events in London, organised by poet Tim Wells and not-for-profit Speaking Volumes, to highlight the heritage and legacy of Ranting poetry. At London’s Camden Centre on Thursday night, at an event billed as The Big One, the Ranters were out in force.

They included Joolz Denby, a heavily tattooed former Hell’s Angel – “sometimes I represent England at foreign literature festivals … the government doesn’t know” – who said Ranting poetry had been invented in her front room in West Bowling, Bradford, by another poet, Steven “Seething” Wells, an NME writer who died in 2009. Her poetry – long, dark, and often moving – might be described as Goth rather than Ranting.

Another poet still out there and still angry is Attila the Stockbroker, pictured (“I’ve been doing this for 35 years”), who is well known to Write Out Louders and who has been in the protest poetry game for so long that he will be publishing his autobiography later this year. In a poem called ‘Never Forget’, dedicated to the Orgreave Truth and Justice Campaign, he described Margaret Thatcher in ringing tones as “a class warrior armed to the teeth”. Ranting poets supported music acts in the 80s, reaching new audiences, and leading Attila to comment: “We were flavour of the month in the NME, for about a month.”

The Big J, Janine Booth, was a proper Ranting poet in the 1980s, who has returned to the poetry scene after a long absence in which she has been actively involved in trade union campaigns. The Marxist and socialist-feminist is still “mostly hating Tories”, the title of her recent collection, but also read a highly effective poem called ‘Real Rape’.

Manchester’s Ginger John aka the Doomsday Commando – not much of the ginger about him these days – had poems that referenced Eddy Shah’s shortlived Today newspaper, Colonel Gadafy, Terry Waite, old advertising slogans, and the Magic Roundabout, read from paper that appeared to be yellowing – or maybe it was the lights. But he’s going on tour again in the autumn, he shouted out as he left the stage.

Because of the number of poets on the bill, the set lengths were restricted, so that we received a Ranting sampler, like those old budget vinyl albums back in the day. This even applied to the biggest names, Linton Kwesi Johnson and John Cooper Clarke, who arguably pioneered this style of poetry back in the 1970s.

Johnson, dapper in trilby and summer jacket, talked of and read his poem, written in 1972, about how “it was apparent to the black youth of my generation that the police had declared war on us, and it was a protracted war of attrition … this is a poem of resistance, as I saw it then.”  Another poem, ‘The Great Insurrection’, referred to the Brixton riots of 1981 that spread to almost every  inner-city area in the country. Johnson also said that he was very familiar with the Camden Centre, where book fairs of radical black writing had been held during the 80s and early 90s. One of those readings at the first fair was “a young Jamaican poet by the name of Michael Smith. Michel tore down the place with his poems – a year later he was murdered in Jamaica by some political thugs.” Johnson then read Smith’s poem, ‘Mi Cyaan  Believe It’, about the urban poor in Kingston, Jamaica.

Others on the bill were Little Dave, now a health worker – “If you want to see human nature at its best and worst / Be a nurse” - , who followed Tim Wells in opening the night. Dave’s output included a love poem in praise of his partner’s farts, and another dedicated to Nigel Farage, ‘The Product of Mosley’s Phlegm’. Young Emily Harrison – “I write a lot about mental health, and the Arts Council love that!” – contributed a tongue-in-cheek poem called ‘Stockholm Syndrome” – “he works for the NHS, and I’m detained under the Mental Health Act” – and another titled ‘When Your Girlfriend Tells You She’s Bi- But You soon Find out She Meant Polar”. There were more smiles with John Hegley, who in a truncated set managed to squeeze in his trademark ‘I am a Guillemot’, plus Phill Jupitus, who seemed as surprised as anyone to find himself closing the show, and following on the heels of  John Cooper Clarke.

The Bard of Salford has an unquestionable aura about him, even though some of his jokes do remind you of those of the more traditional northern comics, and even when he recites poems such as ‘Get Back on Drugs, You Fat Fart’: “We only like you when you’re plastered … you were good once, but I don’t remember it.” For Dr Clarke, honoured recently by Salford University, is assured of his premier spot in the pantheon of punk poetry.  He even produced a new northern poem – “I’m rediscovering my roots” – set in Oldham (“Why? Because I’ve never been there.”). ‘Trouble at Mall’ includes the line, “I nearly choked on me tarka dal”, which is good enough for me.

Plaudits as well to compere and comedian Mark Thomas, and of course to Speaking Volumes and to Tim Wells, who received a resounding cheer from the audience at the mention of his name. And rightly so – his care in helping to keep alive the flame of Ranting poetry and in burnishing its memory produced a great night at the Camden Centre, as well as a series of other worthwhile events this spring and summer, including a special night at Bang Said The Gun, and next week’s event at the Black Cultural Archives in Brixton. It fell to Phill Jupitus to point out: “We did all the ranting, to stop things happening, and it’s got worse.” The promised land certainly hasn’t arrived, it’s true.  Well, what’s the alternative? Carry on Ranting? Tim Wells insists: “Angry poetry has never been more relevant, even from old fat blokes.” Answers on a postcard, please – or maybe, in a poem.

Looking back on this piece six years on, I must say how heartening it is that so many of the performers on that night are still alive and kicking ... and will be performing again once all this is over.

A very readable report of an event which intrigues me.
The danger of ranting becoming ineffective is no different
to the reception afforded to someone doing something
similar out on the street - puzzled exchanged smiles of patient exasperation and pity for the individual brought
down to behaving in such an extraordinary manner. The
British are just not into ranting...sorry! It's just another
form of extremism that rarely succeeds in our society.
Of course, this sees rants at the perceived lack of understanding for its existence. It's a hard old world!
Oh - someone tell LK Johnson that the Met. Police didn't
declare war on his generation...they put up stop signs
on the sort of behaviour and self-regulating codes of
conduct that saw drugs and crime become impertinently
blatant in the streets, with today's "Operation Trident"
merely the official recognition of what was happening
and which was created to combat the ever-growing problem among one section of (largely metropolitan) society in post-war Britain. I hear little of the fact
that Jamaica has had a reported crime rate that rivals
cities like New York. Importing that sort of social aberration into the UK can only add to its generational
social problems, even worse when exploited via a
historical "victim" mentality and agenda. It's a hard
old world!