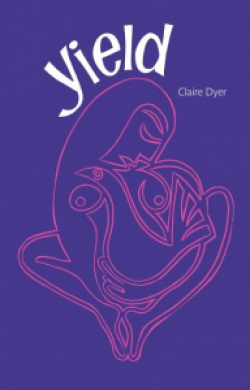 This collection is about a mother’s journey as her child transitions from son to daughter; as the poet moves from seeing a “honeycomb heart shatter, fall”, to anticipating going clothes shopping together: “Oh, what a beautiful morning it will be.”

It has a framework, expressed by its title and three poems looking at different meanings of the word ‘Yield’. The journey is also traced through four poems each with the title ‘Clinic’. And there are three poems that refer to the last line of Charles Causley’s moving poem about family, ‘Eden Rock’. Dyer’s final poem in the collection represents a triumphant reassertion of the strength and continuity of her family: “I did not expect it could still be like this.”

But before that, in the beginning, “Your birth was boy” (‘Alchemy’):

of you held up for me to see,

our eyes meeting the way

eyes do, not knowing then that here

at this other end of alchemy,

was how it was meant to be.

Dyer is a skilled and accomplished poet, and many of the poems in this collection are clothed in a kind of magical realism, that includes fish, foxes, and flocks of birds. She also looks at Britain’s ambivalent relationship with gender, as portrayed in the theatrical genre of ‘Pantomime’:

the Genie – an androgynous ventriloquist –

is holding up his magic lamp as though it is a hand grenade,

like occasional tables to his chest – is scolding his best son

- a girl in boots and tights

Magic, sorcery, alchemy. ‘Abracadabra’ deals with “the how, when, what and where of it” with a theatrical flourish, the “wizard-surgeon” portrayed as a “magician pulling a white dove, / startled, from a hat.” Yet it remains hard to let go of the past:

if we were in a movie

I’d be singing, not weeping

the way I’m weeping as

I pack away the tiny jacket – its galaxy

sewn on once upon a time

when you were still a boy.

It would be wrong to concentrate on such difficult and painful moments. Yield progresses to others of acceptance and joy: “You entered like a gazelle – / graceful, eyes wide and oh, so lovely. //The stairwell air was homely. / We’re getting used to this, your father said.” (Clinic III’). In ‘Shopping’ Dyer in exuberant mood makes free with the first line of Prufrock: “Let us go then, you and I, to Primark, Zara, Reiss.”

Other family members are not forgotten. Dyer on the doorstep of her parents’ home, waiting to break the news (‘Coming Out I’); a sibling’s marriage (“I see you at your brother’s wedding, / your heads together like you as infants") (‘Sand’); and tender mentions of her husband in poems like ‘On the day your father and I do almost everything’.

The enduring strength of family is one of the keys to this collection. Causley’s poem, about mortality, and seeing his father and mother beckoning to him, ends with the line: “I had not thought it would be like this.” Dyer’s own journey begins with the final line in ‘Delusion is an Unspeakable Thing’: “I had not meant it to be like this.”  In ‘Not a Tragedy’ she wrestles with letting go of “seeing it still like this”. ‘Afterword: Like this’, the final poem in the collection, ends with a serene moment of acceptance and devotion:

Turning, I see your father sleeping.

I did not expect it could still be like this.

This is an important collection that may well provide guidance, help and comfort to others in similar situations. But these are also poems that satisfy on their own terms, exemplifying Dyer’s craft and skill. At no time on this emotional journey, as her son Liam becomes her daughter Lucy, does she lose her grip as a poet.

Wow, readers! Write Out Loud's Matt Abbott pops up at a poetry slam - in the Beano! ►