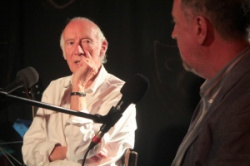 Roger McGough has any number of very funny poems.  As he explained at his reading at the Troubadour in London on Monday night, ‘Mermaid and Chips’ is “about pubescent longing – but mainly about chips”. It tells of the young McGough calling in at his favourite chippy in Liverpool where the lovely Linda and her mum served behind the counter. He believed that “despite my school uniform, Linda took a shine to me”. He saw the two servers only “from the waist up … I dreamed of Linda as half-woman, half-haddock”.

The poem is a perfect blend of homely comedy and whimsical fantasy; McGough at his best, delivered in his clipped, dry, mellifluous tones. He read a number of poems like that on Monday night, and after the break, in a Q&A session with poet Cahal Dallat, discussed humour in poetry, and why there doesn’t seem to be so much of it around these days. The presenter of BBC Radio 4’s Poetry Please observed: “The critics always see the comic side as light verse - you’re not serious.”

McGough said his sense of humour developed during his schooldays at the hands of the tough Irish Christian Brothers in Liverpool. “When you’re repressed, humour is one of the ways you cope with it. It isn’t saying the clever, funny thing at the time – you do it later on.” He failed his Eng Lit O-level at 15, and couldn’t get his head round the kind of poems he found in Palgrave’s Golden Treasury. His mother sent him to elocution lessons, to stop him gabbling. When he went back to school, to teach, he was once more handed the Golden Treasury. His class didn’t seem to like it any more than he had, so he gave them some of his own poems, that he had been reading at Streats coffee bar on Monday nights with Brian Patten, Adrian Henri, and others, “poems about my aunties, or football, and they liked those, and so I thought, maybe I’m writing poetry”.

After school he would plunge “into a phone box, change into tight trousers”, and re-emerge as “Superpoet”, reading poems set in Liverpool, rather than in London or New York, as many contemporaries were doing. That choice of setting led to the bestselling The Mersey Sound anthology with Henri and Patten, now a Penguin Modern Classic, chart-topping songs with the pop group The Scaffold, and even writing the Beatles’ dialogue for the Yellow Submarine movie. He is now president of the Poetry Society.

He went to Hull University as a undergraduate, and encountered the university’s librarian Philip Larkin, “a towering steeple of tweed”. He sent Larkin some of his poems. The verdict? “You’re walking an impressionistic tightrope, and occasionally you fall off.”

Talking of impressions, McGough has a lovely poem called ‘Aubade’, after Larkin’s poem of the same name  -  part-tribute, part-fond pastiche – which also contains a wry reference to Larkin’s much-quoted ‘Annus Mirabilis’: “Sexual intercourse began / In nineteen sixty-three …” He imagines the elder poet tramping around on the floor above in the early hours, unable to sleep, listening to jazz, and then knocking on his door to apologise, and to ask if he could remind him of the date of the Beatles’ first LP. There were also fond homages to Gerard Manley Hopkins, imagining a meeting between Hopkins and Charlie Chaplin in Liverpool, and Dylan Thomas listening in to conversation at Brown’s Hotel in Laugharne, that revealed McGough’s warmth, wit, and erudition.

Interviewer Cahal Dallat reminded him of the poem ‘The Identification’, which he had read in Belfast, a serious poem read in McGough’s familiar tone, which made it that much more moving, somehow. On Monday night he also read a funny but poignant poem about an auntie Marge: “She talked of missing her vocation, as if it was the last bus home.” His latest collection, It Never Rains, has several poems about relatives, and is full of laughs, wit and wisdom.

Coffee-House Poetry organiser and host Anne-Marie Fyfe said afterwards that McGough’s reading had been “exquisite … a word I don’t think I’ve ever used to describe a poetry reading before”.

In keeping with the Troubadour’s musical tradition, the entertainment was completed with the mellow jazz singing of songwriter Bernadette Reed, backed by Ian Salmon (guitar) and Le’Voy Wilson (keyboards).

'A Bradford millionaire': line from The Waste Land is clue to £20,000 donation ►

I think it's really quite difficult to write good comic poetry - I know I struggle with it myself. The odd one, maybe one per year, may come out but I think you've got it or you haven't.

Our very own Dave Carr is one of THE best comic poets I've ever heard, and intelligent with it. He's had the room in fits of laughter many a time I've seen him. I wish I could write like that, but I can't!

Know thy poetry, presume not that they scan.
The proper study of that kind is that man
Palgrave – no, don’t cough
I was a mute Milton, ‘til I read McGough.

I will state there are some of us
(He may think it rum of us)
Who are beholden to the pleasure we
call Palgrave's Golden Treasury!

Did he talk about the exploding football/dog on the beach?
One of the best live nights I've ever been to when I saw him at Wellingborough.

Was there with Greg and thought a ditty in order:

Roger McGough
knows his stuff
a gleam in his eye.
Here's why.
At school
as a rule
no thanks for
smarty pants.
Meanwhile,
a smiling greeting
avoids a beating
on the way home
brings on a poem.

How now
Roger McGough,
we see grows old
gracefully. I told
of when
my daughter not ten
well in last century
at Poetry Society
read 'Goodbat Nightman'
especially for 'Lydia'
to hear. (How they've ran
past us – the dear years,
good sir.)