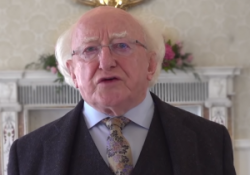 The president of Ireland, and poet, Michael D Higgins, has performed ‘Rave On, John Donne’ as part of a tribute by the magazine Hot Press to the poem/song’s writer, Van Morrison, to mark the 75th birthday of the Irish songwriter. Van Morrison speaks and sings his poem on his 1983 album Inarticulate Speech of the Heart. The poem/song also includes references to Walt Whitman, Omar Khayyam, Kahil Gibran, and WB Yeats.

Michael D Higgins has been president of Ireland since 2011.  He has had poems published in a number of periodicals, and published four collections of his poetry, including The Betrayal (1990), his second book of poems The Season of Fire (1993) and An Arid Season (2004).

Earlier this year Faber published Keep ‘Er Lit, a second volume of more than 100 of Van Morrison’s song lyrics, with a foreword by Paul Muldoon. Van Morison has often been spotted at poetry events over the years, including the Troubadour in London.