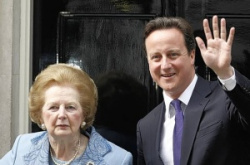 Ripples of Detriment
I will not mourn your passing, or for that, rejoice your death
As you embark upon the journey that begins with your last breath
Perhaps you thought it proper and in sound mind made your choices
Utilitarian motives maybe?   Deafend you, to the sound of poorer voices?
The miners, plebs and working class who became collateral damage
The conception of a tough regime that resulted in miscarriage
You sold off family silver when the finances where low
Upped interest rates and privatised, untill there was nowhere left go
When the lifeboat came unstable and you feared we’d all go down
You chucked us out, and looked on coldly, as the north began to drown
This Lady's not for turning it just wasn’t Tory fashion
Hard choice’s made with Iron will.  Why hinder with compassion?
As a business woman exemplary hard nosed and unrelenting
Had faith in cause, its just hard lines, no time for sentimenting.
But Ripples still felt from your reign economic scars and social rift
Animosity from working class became your leaving gift
So now people dance out in the streets and celebrate your gone
But more fool them “the which is dead?” in Cameron you live on
So I’ll wish you Gods speed on your journey, pay your family my respect
Show them working class compassion from a place that once you wrecked
Yes, in Liverpool we felt the brunt of the lady's Iron will
But despite all the things you put us through
Our hearts will beat on still.
Ged Thompson/ Liverpool Poet and Writer 13/04/13.

Well done Ged. Well balanced sentiments. Perhaps better than thinking: Right. Who shall we hate next?
Not sure what you meant by your message.Ah yes, I meant you to blog and then put a link in the news items comments. Sorry for lack of clarity.

Hey Ged...nice one....and as usual with that great flow that works so well..Going to love hearing this!

Fully agree with the sentiment, Ged. Likewise it's where I sit. Detested the woman (with good reason as I explained in my piece of prose), but equally detest the sight of folks dancing on her grave.
Poetically tight and well crafted with some vivid images.

I really like the line now Ged. Sense and end rhyme come together perfectly imo.

In terms of Laura's poem; If you search for Laura via the search box in the top left of the screen, you should be able to reach her profile. Her poem should be the last/top on her list of poems/blogs.

Thanks very much boys, I'm made up with these comments (-:

Have adjusted on your guidance Chris, think its better now

Would love to see Laura's poem?

Have we got a link to it?

Measured and considered, I admire the even-handed style that offers a view from both a personal and a general perspective - albeit essentially from a particular geographical(and political?) viewpoint. The adoption of "working class" as if it were a term solely descriptive of a certain employment and location may be challenged insofar there were many who also came within that remit but were supporters of the Lady and were trying in often lonelier less public/physical circumstances to make a future for themselves.
I'm sure this would be well received in performance.

Some fantastic lines that hit the mark, not least;

When the lifeboat came unstable and you feared we’d all go down
You chucked us out, and looked on coldly, as the north began to drown
Unquote

My favourite is this;

I like that for a number of reasons, the flow of the line and language is excellent, but also because it avoids being sanctimonious. There's no idea of superiority, rather in showing compassion, you afford her the one thing she never afforded you or anyone else from Liverpool, the North, Scotland, Wales, mining towns, steel towns, automotive workers, or those on their uppers. That's not mere humble pie. That is a juxtaposition that affords humanity whilst simultaneously highlighting precisely what she did - clever and intellectually satisfying to my mind.

To try and add something critical, to what is a very good piece of writing; I did notice one small technical point which might be worth addressing;

In the lines below, because of the number of syllables and scansion - I think the intended end rhyme of the second line in the couplet misses out;

Quote
Perhaps you thought it proper and in sound mind made your choices
Utilitarian motives maybe? Deafend you to the poorest voices
Unquote

I think this is easily corrected via a little play with the lines/language. Other than that I like the use of deafend and utilitarian in the context. Utilitarian is very appropriate because she definitely thought she was right and must therefore have counternenced acceptable losses. Deafened is right - becuase she couldn't listen to people.

In some respects your poem and Laura's poem on this are like bookends, similar in political outlook, but very different in how you have both viewed Thatcher.. Both are legitimate, powerful and personal.

I'll look forward to hearing you read this.