Poet's tribute on Write Out Loud is read out in Parliament 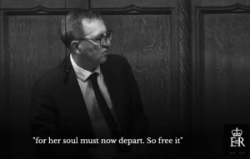 A poem posted on Write Out Loud after the death of Queen Elizabeth II has been read out in the House of Commons by the poet’s MP. ‘Our Lily’ by Stephen Atkinson was read out in its entirely by Sedgefield MP Paul Howell on Saturday at Westminster during tributes to the late Queen.

Stepehen shared the news on Write Out Loud, saying: "I've had the honour of having it read out in Parliament by local MP Paul Howell today! So quite a proud moment."

He later told Write Out Loud: "To hear your own words read out in the House of Commons on such an historic occasion was indeed an honour."

It happened after Stephen, pictured, posted the poem on a local community group website. MP Howell read it and contacted him.

The poem begins: “Our lily of the valley / Has shed her petals free / To drift upon the winds of time /In her own sweet Galilee.”

And its penultimate stanza reads: “You'll always be our true foundation / The soil of our scepter'd Isle / A constant in our thoughts & hearts / Great Britain's brightest smile.”

Trauma and humour: the two sides of Martin Figura ►

The Queen » 'Hands that can rest, now, relieved of a century's weight': poet laureate’s tribute to Queen Elizabeth

A beautiful and insightful poem

Thank you Tom & M.C. Not sure if I have a talent or if my poem deserved the read out, but I'll take it! 😃
Thanks, again, for taking time to comment.

Wow, that's fantastic Stephen. A testament to your talents! Congratulations.

Well done. Your work deserves this appreciation in Parliament..