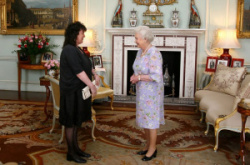 Simon Armitage’s predecessor as poet laureate, Carol Ann Duffy, has written her own tribute to the Queen. The former poet laureate has previously written a poem to mark the Queen's diamond jubilee, and said that her most important connection with Buckingham Palace was through the Queen's gold medal for poetry, which is awarded every year: "The Queen takes a big interest and we have a lovely day at Windsor castle."

In 2012 she edited and published Jubilee Lines, an anthology of 60 poems by 60 poets, for the diamond jubilee, to mark each year of the Queen’s reign. In 2013 the-then poet laureate also organised an evening at Buckingham Palace to present poets to the Queen and Prince Philip, saying afterwards: "I could tell that the Queen and the Duke of Edinburgh loved it. They were really engaged and laughing and listening very intently.”

Her funeral poem, published in the Guardian on the day of the Queen's funeral, is titled ‘Daughter’. It begins:

Your mother’s daughter, you set your face

that ran by the river; behind you, the castle,

It focuses on the progress of the Queen’s coffin from Balmoral, and includes a reference to climate change towards the end:

Soon enough they would come to know this had long been

the Age of Grief;

that History was ahead of them. The crown of ice melting

on the roof of the world.

'Hands that can rest, now, relieved of a century's weight': poet laureate’s tribute to Queen Elizabeth ►

The Queen » 'Hands that can rest, now, relieved of a century's weight': poet laureate’s tribute to Queen Elizabeth