Trauma and humour: the two sides of Martin Figura 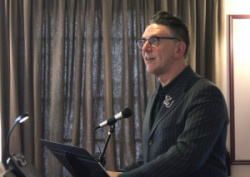 There is a serious side to the poet Martin Figura. Quite serious. It was revealed during the first half of his set at Poetry Performance in Teddington on Sunday night, when he read the title poem, ‘My Name is Mercy’ from a pamphlet based on his observations at Salisbury District Hospital during Covid. A former soldier himself, a poem called ‘Bear’ was based on talking to soldiers with physical injuries and PTSD who had served in Iraq and Afghanistan. His poem ‘Vineyard Boys’ is about his time in a children’s home in Wellington, Shropshire, in the 1960s. You can find out the reasons that he ended up there in his remarkable collection Whistle.

And then there is his funny side, with poems like ‘(The Trouble With) Middle-Aged People’ – “There’s even one reading you this poem, and look / he’s wearing red trainers with white stripes.” It certainly got a good laugh from the Poetry Performance audience, many of whom - including your correspondent – now contemplate middle age in their rear-view mirror. Another well-received one was ‘This Be The Worst’, Figura’s take on Larkin’s ‘This Be The Verse’, which concludes:

Move them on as early as you can

and don’t ever try for any more.

Sentiments belied by his poignant poem about a daughter that has Down's Sundrome. Yet Figura, who is also a photographer whose work has been exhibited at the National Portrait Gallery, has a bit of an affectionate fixation for Philip Larkin. In another poem, he imagines the famously grumpy poet complaining of being “trapped in a corner with Martin Figura” - a fate apparently worse than that inflicted by Larkin’s mum and dad - and blaming Monica “for dragging me to this”.

There was no indication, happily, that Figura felt that he had been dragged to Poetry Performance. Indeed, he paid tribute to the night’s two comperes, Heather Moulson and Anne Warrington, for “hosting so brilliantly”, as well as somewhat “eccentrically”, which all added to the fun.

That fun included Dilly Orme, resplendent in a beehive hairdo to match that of Figura’s wife and fellow poet, Helen Ivory. Dilly’s poem about positive body image included the lines: “Now, when I think of my belly / I just think, Botticelli”. The title of her second poem, ‘Rockets’, referred to a euphemism that I hadn’t come across before – and I thought I knew a few. But then I have led a fairly sheltered life.

Andrew Evzona, always good value, was accompanied by a zebra glove puppet. Heather Moulson reminisced about ice inside the bathroom window, which we might have to get used to again. Hannah Stanislaus, debuting at Teddington, read two poems about their grandfather, a Windrush veteran. There were also contributions from Connaire Kensit, Fran Thurling, Robin Clarke, Sian Mac, Ken Mason, Carol Wain, Chris Naylor, Mike Gordon, Vicki Naylor, Stephen Harman, Heather Montford, and myself. In addition, we were treated to two numbers by singer-guitarist Felicity Buirksi, a real presence with a compelling voice. 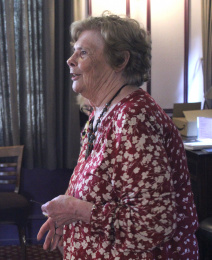 Poetry Performance’s organiser Anne Warrington, pictured, opened the evening with a poem about a perfect garden, in keeping with the evening’s theme of ‘outdoors’.  Anne founded the open-mic night Poetry Performance, which meets on the first Sunday of each month upstairs at The Adelaide pub in Teddington, south-west London, with the late Bob Sheed. After Bob’s untimely death Anne has continued to run the night with energy and dedication, ably assisted by Heather, and has also found time to stage additional events, such as an impressive first world war commemoration, and a current project, an anthology of poems in support of Ukraine.

For me, it was possibly my last regular open-mic night at Teddington before moving to the north-east. I will miss its convivial atmosphere, and healthy appetite to share poetry.

◄ Poet's tribute on Write Out Loud is read out in Parliament