Thank you, Stephen Gospage, for never letting us forget about the war in Ukraine 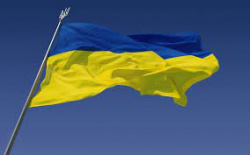 We at Write Out Loud would like to mark Ukraine Independence Day by paying tribute to our own regular contributor Stephen Gospage, who has been untiring in posting poems about the terrible situation in Ukraine on this site. While the media has grown weary of reporting the atrocities perpetrated almost daily by Russia, Stephen has continued to post poems of remarkable quality, sympathy, and empathy – and, to employ Wilfred Owen’s famous word, pity – about the terrible war wreaked by Russia on its neighbouring country.

You can read Stephen's most recent poem about Ukraine - 'Afternoon Stroll', posted on Monday - here.

Stephen has spent most of his working life in Brussels. Now retired, he lives in Belgium, close to Waterloo, and has dual British and Belgian nationality.

Three of Stephen’s poems – ‘Staged Event’, ‘Missile’, and ‘Carnival’ – have appeared in the Poetry Performance anthology Poems for Ukraine, to be officially launched at The Willoughby Arms pub in Kingston-upon-Thames, on Friday 16 September. You can find Stephen’s poems about Ukraine on his Write Out Loud Profile page

◄ The English Summer: Holly Hopkins, Penned in the Margins

I hope we won't let war divide us and stay united as one Earth and humanity. Let's show some love to Russia too!

Thanks to everyone for the kind comments and support.

Stephen's poems are always exceptional and the Ukraine ones have been really good. Great to see him getting this recognition.
Looking forward to getting a copy of the anthology.

Well deserved recognition for you Stephen. Your powerful writes about Ukraine over the past months have been very moving. Well done you.

I endorse all of that, Kevin. And what a cracking idea that is. Not about me, of course! But about the anthology. Not only would I buy one I’d contribute to the cost.

I appreciate all of Stephen's poems, but I find the ones about Ukraine particularly moving.
Maybe we could start a thread on here just for Ukraine or anti-war poems.
John Coopey has also posted some powerful stuff.
If WOL brought out a anthology (proffits going to the cause) I'd buy it.

It is very kind of WOL to mention my series of Ukraine poems. This war has led to so much senseless death and destruction and has caused untold damage to Ukraine, whose people have nonetheless shown themselves to be brave and resilient.

I would also like to pay tribute to the many other contributors to WOL who have written fine, moving poems about Ukraine and this terrible war.