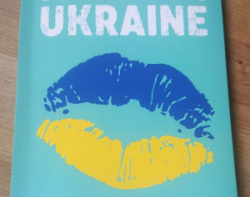 A poetry anthology to help raise funds for displaced Ukrainian refugees has been published by an open-mic poetry group in south-west London. Most of the poets featured in Poems for Ukraine regularly perform their poems at Poetry Performance, an open-mic event that is held monthly at the Adelaide Pub in Teddington. In the past, this group has raised money for various charities including MNDA (Motor Neurone Disease Association) and Off The Record, a drop-in counselling organisation for young people.

Contributors to the Ukraine anthology include two guest contributors from Germany, Reiner Kunze and Albert Ostermaier, whose poems have been translated by Margaret May, poet and translator. Write Out Loud regular Stephen Gospage, who has posted a series of angry, poignant and crafted poems about Ukraine on this site over the last few months, also has three poems in the anthology.

All profits from its sale will go to British-Ukrainian Aid, a charity providing humanitarian and medical aid to Ukraine, and to supporting Ukrainian refugee artists. The cost of the anthology is £8.99 and may be purchased from Amazon, Waterstones or by email at poetryperformancetw11@gmail.com.

Wigan's Shaun Fallows at the PBH Free Fringe in Edinburgh ►

Just to say that I am very grateful to Poetry Performance for including my poems and I wish all concerned every success with this venture, which is in such a worthy cause.