The English Summer: Holly Hopkins, Penned in the Margins 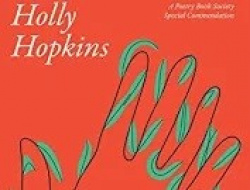 The English Summer by Holly Hopkins bears little resemblance to those summers we’ve loved and loathed over the years, from the wash-out holidays at the seasides of our youth to the never-ending summer of 1976, to which, for some of us, all others are doomed to be compared. No, this English Summer manages to condense our little island’s quirks, histories, futures and the people that have to suffer them, into a mere 74 pages. Big subjects are examined alongside a life lived up to press: growing up, growing up more, living in rubbish accommodation, love and motherhood. There are laughs along the way, even when perhaps we shouldn’t be laughing. Hopkins is a poet who loves to unsettle her readers. If you listen carefully, you may hear her chuckling from the white space surrounding her poems. You may well hear her screaming, too.

There’s a palpable angst about climate change threaded through the collection. Sometimes her anxieties are direct and urgent. Other times they are expressed with an understated melancholy via specific imagery and with poems that turn away from image and head for the heart. The latter technique is evident in ‘Offchurch’ where “the wheat is ready for cropping, a full congregation/beside the road through the fields from nowhere to dismantled nowhere.” We sense the aftermath of some minor apocalyptic tragedy when the poet reveals signs that “...there was once a big house that went on fire...” This little slip into the vernacular renders the human cost all the more powerful. The poem then turns into something quite different, where the I of the poem expresses sadness towards the embers of a relationship. There’s another unexpected turn when the poem ends on a contradictory and arguably uplifting note, where a former lover is portrayed as a beguiling conjuror:

And this is the only time you took the walk with me,

and because you could charm the fish out of its pond

and make it want to stand on its tail to please you:

a saucer-faced barn owl pushed out from the stag oak,

boated into the blue for a moment, then dropped down into the corn.

There’s a startling ambivalence here; there’s a sense that the lover could charm the I of the poem to please him too and the reader is left to consider the ramifications of this and maybe the echo of a power dynamic that was once in play before the novelty wore off. With the remarkable juxtaposition of the barn owl added into the mix, that appears only for a moment, before plummeting out of sight, it’s easy to read too much into this beguiling and complex poem. It leaves the reader with the feeling that it’s not only the dippy deceptions of love that cloud our reason and that ultimately, the truth of whatever we’re concerned with will always reveal itself.

In ‘Inheritance’ Hopkins goes for a more direct approach to deal with her concerns for global warming and goes off on one in the company of her mother-in-law. The poem begins with a government policy of community service. As usual, it’s the women who come off worse: over seven hours compared to a paltry four for the fellas. Hopkins then goes on a breathless rant and emphasises the fact that women will be taking up most of the slack: “A bus to the bring-your-own-containers organic store ... Trawl Freecycle eBay in the evenings”. And let’s not forget that “the special bathroom bin houses the dark red odour of reusable sanitary items awaiting your attention.”

Hopkins puts a different spin on what it is that Generation Z and millennials are actually inheriting from previous generations. Indeed, it seems her mother-in-law has been ranting through the years herself. It’s a telling reminder to the younger generations that many of us haven’t stood idly by while the world has been slowly burning:

Her face takes on a spongey look,

maybe of a woman passing on an heirloom, maybe of a

woman biting back, What did you think we’ve been shouting

Not only have older generations also raged, raged against the dying of the planet, but it’s usually women who have been expected to do a lot of the work to counter all the damage we’ve done with “just a little more effort”. The heirloom in question is not just a fucked-up planet but also the “listicle of easy swaps” to save us all from extinction. The poem positively creaks at the seams with irony.

When she’s dealing with motherhood, Hopkins is at her mischievous tongue-firmly-in-cheek best, but also maybe not, really, which makes her poems all the more electric. In the provocatively titled ‘Explanation for Those Who Don’t Know Love’, the poem’s opening lines starts as they mean to proceed: “I have a child and am more important/than childless people.” Lesser mortals simply have no idea about the strength of her relationship with her daughter: “You cannot comprehend our bond.” And of course, her daughter can do no wrong whatsoever, which pretty much gives her carte blanche to do whatever she wants: “If she breaks your possessions/it’s an interrogation of their meaning,/a state of blissful questioning you have lost.” It’s a hilarious and unapologetic celebration of motherhood, or it’s just the poet’s truths coming at you, like them or not.

Elsewhere, she takes aim at ‘Three King Canutes’: “Laugh, laugh at the foolish fop-haired/Rollo square-face as he waves his sword.” She shows us Lady Godiva taking revenge on ogling fools: “Later she will learn where Peeping Tom lives/and use a hatpin on him while he sleeps.” And finally, England itself disappears before her eyes. If she could be bothered to look for you, she’d "...be left wandering down dual carriageways,/looking across bean fields and filthy ditches."

The English Summer has been shortlisted for this year's Forward prize for best first collection. It is an astounding first collection and deserves all the praise it will no doubt receive. It’s an unflinching look at our history, our tomorrows and how we live in the present while both the past and future press in on us. Zombies, Megabus and estate agents pop up with great cameos. This is one English Summer you’ll never forget. And it’s even better than 1976.

Holly Hopkins, The English Summer, Penned in the Margins, £9.99

◄ ‘I now help many people find their own pleasure in writing. You can't put a price on that'

Thank you, Stephen Gospage, for never letting us forget about the war in Ukraine ►