What Lies Above And Below Us 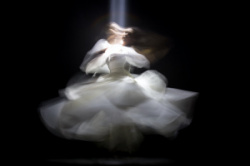 The sky bursts into colours-

With red and all the hues in its range.

Miles beneath our feet

Their ampoules once known to everybody.

Suffuses stars and their milky shells.

The departure from earth melancholic but serene,

Leaves behind shimmering trails that speak to those who see.

What falls below spirals down and down an abyss

The browns and the oranges lead the one

To flames of eternal damnation.

Or perhaps not, perhaps all is a lie.

A construct to define an illusory afterlife.

Perhaps no life exists above and beyond what can be seen,

The constricted world our only scene.

But the possibility still remains that all might be true.

The denial of secrets misconstrued.

Who’s to say? Or judge the unseen?

Above the heavens, below the soil and everywhere in between?

Existence is a potpourri

Of fragments that surround us beings.

Where oceans are mere shards of glass,

And the earth a scant bundle of grass.

A damn puzzle wherein all the pieces are eccentrics;

Eager to seek purpose or at least some kind of logic.

The Cost Of Your Hand ►

I understand the tension between thoughts of heaven and hell. You wrote that tension out well.

Shehariah, thank you for your uplifting words. You're really kind, and I'm glad you enjoyed this piece.

Thank you, Nicola stopping by. Afterlife to me is such a fascinating yet terrifying concept. I often catch myself fantasizing about paradise, but blissfully ignore the entire concept altogether once I begin to spiral down a cesspool of hellishly terrifying thoughts. Appreciate your input regardless! Your question can start some really healthy discussions.

What depth! I really enjoyed this read. I love the line “existence is a potpourri of fragments that surround us beings.” You have wonderful talent and write brilliant poetry.

Is it so wrong to believe in the afterlife, many do, Robins and white feathers etc, butterflies etc all signs

Thanks, Abdul and Po (once again) for your wonderful comments. Couldn't be more grateful! :)

Shaifa you have weaved an intricate tapestry with intriguing threads of colourful philosophical imagery.

Thanks, Po!
Existence is just one of those things that the more you think about, the more it messes with your head.