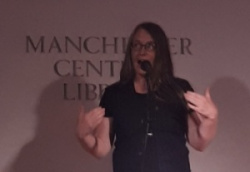 This week, Janey Colbourne is awarded the Poem of the Week accolade for the first time. Her poem The Voice of the Commons attracted a lot of praise when it was first posted on Write Out Loud, and we're delighted to bring you her responses to our Q&A.

What got you into writing poetry?
Actually I came to poetry through a serious illness. I had to give up my job at the time and have a couple of operations. I was spending a lot of time incapacitated. Poetry was a means of expressing myself, venting and transforming my feelings, achieving something creative and connecting with people, that I could still do even in bed. My bed became my office! I had already been blogging as a non-fiction writer, so then I started blogging my poetry as well. After my operations my vocal cords were paralysed, but once I started recovering I began to practice spoken word. I have a background as a musician so I love the patterns in poetry, the flow of the rhythms and rhymes. I use internal rhymes a lot.

How long have you been writing?
I started writing poetry about three or four years ago, but I came to writing through non-fiction. I first realised I loved writing when I was doing my dissertation for my degree in 2001. I think I was the only person to say afterwards that I’d love to write another one, but it took me a long time to realise that being a writer was what I wanted as a career. Since my illness I realised that this really is my passion and it feels like home. I have a lot of interests and passions, and as a writer, I can explore them all. I still write creative non-fiction as well as poetry. I’ve been an avid reader all my life, so I guess I’ve absorbed a lot of language and ideas. I enjoy researching for writing as much as the writing itself.

Do you go to any open-mic nights?
Yes, a few months ago I started regularly going to Word Central at Manchester Central Library, hosted by Tony Curry. I’ve met some lovely people, and heard some great poetry. I’ve been to various other open mics in the North West, including one in May this year at Ham & Jam in Preston, which was hosted by Laura Taylor and Steve Pottinger. Every month I do a set at Artspace at The Bureau, Blackburn, which isn’t just an open mic, it’s a family friendly creative space for all forms of art. Being behind a mike isn’t entirely new to me, as I’ve been in bands before.

Your favourite poet/poem?
It’s hard to choose. I have a few! They’re all spoken word poets. I really admire Kate Tempest, and she also does rap and writes music like me. At the moment I’m really passionate about Olivia Gatwood, who is a phenomenally powerful performance poet. ‘At the Owl’ and ‘Directives’ are two of my favourites by her. Closer to home, I’ve been inspired by Laura Taylor and Steve Pottinger.

You're cast away on a desert island. What's your luxury?
My iPad with a solar charger, so I can read, write, make music and art as much as I like.

The Voice of the Commons
by Janey Colbourne

Goodbye to a job for life.
Don’t expect a contract.
Farewell to the greengrocer,
selling fruit in paper bags.

Farewell to the council house.
They’re selling off allotments.
The end of days for the bursary.
No more power to the unions.

Here are the days of oil pipes leaking.
Here is the time of the internet troll.
Here is the age of propaganda,
the living threat of mob rule.

Here too are the days of global networks,
dissemination of knowledge.
Here are the thousands that stand in protest,
sharing hope and solace.

Here is the means for a new kind of union,
waking up to justice.
Now is the time for revolution.
We still have our voices.

Thanks Andy, yes I will certainly be doing it at Word Central sometime soon.

Thank you Aly and congratulations on yours last week

Thank you for your kind comments and feedback!

A sense of frustration at the seeming helplessness which engulfs us. It seems strange to think Macmillan said: "you've never had it so good." Perhaps things were more egalitarian then but that's a big question and one for more focussed minds than mine. The poem ends optimistically and poses that big question.
A deserved poem for POTW, congratulations Janey.

Awesome work, these words speak a truth many would love to shout aloud.

Thank you so much everyone!

A great poem Janey. Love it. I look forward to reading more
Many congrats on POTW

No matter what nay-sayers may have to say - the concept is still one worth fruition and thoughtful dissection. Nicely done.?

This poem is inspired by and dedicated to another kind of pen holder—those who have been growing food and rearing animals on their allotments for many years, who are now fighting to remain on them as, due to austerity cuts, councils are trying to sell off the land.

Thank you very much everyone!