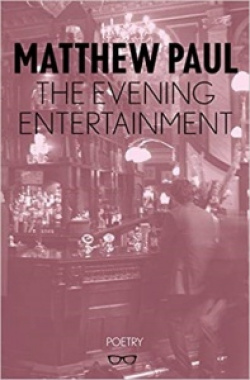 There is no shortage of exotic subjects in Matthew Paul’s debut poetry collection, which is said to have taken 30 years to put together. It includes poems about high-wire artists cheating death, a man who swallowed a toad, a strongwoman married to an acrobat, a human cannonball and a motorcycle formation team.

Paul also writes about everyday things, moments you had forgotten:  “many a side” kickabouts abandoned after an “unleashed mongrel” chews up the football in the park; playing vinyl singles at the wrong speed on a radiogram; the humdrumness of south-west London, a place where he grew up, and I know well.

That lack of glamour – Paul’s early days were in New Malden, a largely unnoticed suburb skirted by the Kingston-bypass although also, somewhat oddly, now home to most of the Koreans that live in the UK – is encapsulated in the final line of a poem about hitching home from Ulster: “ ‘Kingston’s in Jamaica, innit?’ ” Not this one, no.

Remember the fun of wrong-speed vinyls?:

Sixteen was by far the most alluring –

Paul’s poems are witty, crafted, humane and encompass a number of subjects. A prose-poem, ‘The Triumph of Sylvester Clarke’, describes those early, distinctly unsporting days – the early 1980s, in fact – when black players would get regularly hooted by racist English crowds. In this case, Surrey’s fast bowler was getting the treatment at the Oval from a visiting tribe of Yorkshire cricket fans. Paul documents the moment that Clarke dismisses their hero – “all fresh, imperial-white wrist-bands and chewing-gum” – after having him plumb lbw.

‘The Leaving Do’ is a workplace poem that chronicles a downbeat event in a reserved area of a pub – you know the sort of thing - with a “fair-sized turnout-out considering it’s a school night”. After a low-key, if not depressing evening, the conclusion is splendidly romantic: “That’s when / Vivienne from Finance appears at your elbow / and wells up unstoppably, as she’ll miss you ‘like mad’, / and you never, ever, even guessed.” Such a poem deserves to be included in an anthology or two about work.

The title of the collection is taken from a line in ‘Half Board at the Alum Sands Hotel’, a recollection of childhood seaside fun mingled, like sand in your shoes, with excruciating embarrassment:

is a roast with croquette potatoes and peas, topped off

by sherry trifle and Dad’s urbane request for the cheeseboard.

The evening entertainment – one man and his Casio keyboard

piping ‘Tie a Yellow Ribbon’ gets Mum and Dad jiving.

We straw-suck the dregs from our glasses of cider.

Longer than a week would be murder.

The Evening Entertainment is split into three sections: the first features the aforementioned array of oddball performers; the section looks at suburban oddballs; and the third addresses the decline into dementia and eventual death of the poet’s father. That final section also includes ‘Sunday at the Oval with Dad’. The reserved, conservative father in his seat in the top tier of the pavilion nevertheless joins in a Mexican wave, so as not to disappoint his son. It’s a literally uplifting moment:

Tanned to teak, he tips his sun hat aslant,

drops the pencil, and for just that moment

we throw our arms right up to twelve o’clock.

Matthew Paul is much more than just a poet of the suburbs. But it is certainly a milieu and an era – the last decades of the 20th century - that he has pinpointed and lovingly described in a number of poems in this book. A gestation of 30 years has resulted in one of the richest and most satisfying collections that I have encountered in a long time. However, I do hope that his next collection will not take as long to put together – otherwise I for one may not be around to appreciate it.