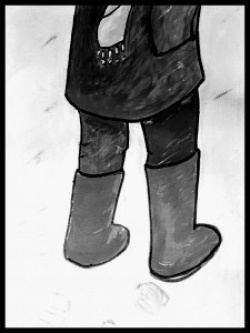 The new Write Out Loud Poem of the Week is ‘Courtyard in Snow’ by Tom Harding. Tom lives in Northampton and edits the Northampton Poetry Review, an online and print journal that also covers fiction and non-fiction. He has regularly blogged his poems on Write Out Loud for a number of years, with accompanying drawings. It is the second time that he has won Poem of the Week. He has said of his poetry: "I like simple things ... for it to be successful I think it needs to be quickly felt. I have limited means of expression so luckily I'm comfortable with timeless themes." About his current Poem of the Week Tom says: "What could be better than a morning of snow? Sometimes nothing else needs to be said."

Can you tell us more about the background to this poem?

I think it was about the importance of not saying something as saying anything. It was a reminder to myself to enjoy what's in front of me rather than feeling like every moment needs to be captured and regurgitated which is a type of modern tyranny. I mean what could be better than a morning of snow? Sometimes nothing else needs to be said.

Last year you launched an online and print poetry magazine, the Northampton Poetry Review, its first issue containing a number of familiar names from Write Out Loud. What spurred you to take on this project?

It may seem a strange answer but it was the result of having a baby. I have a list of things I want to do at some point all of which suddenly felt more urgent. In some ways creating a poetry magazine was the most unnatural of these, given all the practical aspects involved. However I decided to ignore my natural inclinations and do it anyway, I tend to get more done that way.

What sort of workload is involved?

There's lots of little things that if not managed properly can become big things, like finding time to email everybody that emails you, ensuring coverage on all the necessary social media platforms, choosing the right weight of paper for the print version. I didn't consider any of these things when we started. Luckily my wife took pity on me when she saw I was floundering. She's the quartermaster ... and on occasions the captain.

What are the aims of the journal?

The original idea probably arose from some beat sensibility of wanting poetry to return to the everyday. I've always liked the idea of it being available to people as readily as other media, existing as an alternative news feed.

You mention on your website the importance of “NPR’s patron saint”, the Northamptonshire poet John Clare. Would you like to say more about him?

Clare is a planet to be explored. He's a Northampton poet but that's not the only reason we chose him, he represents many things. He’s a parcel of contradictions. He was traditional and yet abandoned tradition - he didn't adhere to typical aesthetics or structural doctrines. He has his own mindset, vocabulary and grammar which put him out on his own, both in his life and his writing.

Some people will know him as much for his struggles with mental health. The truth to that might be his mind was too great and filled with too much it spilled over. He had love affairs with ghosts and believed himself to be Lord Byron, Shakespeare and a celebrated prize fighter. He had too much imagination for one man and lost control of things. His solace was his poetry and the peace of the countryside where he would walk the fields, feel the breeze and listen to the birds. Fundamentally he was an outsider and I think that is what we responded to the most.

Do you always accompany a poem with a drawing? Are the two art forms equally important to you?

It does seem that way. I enjoy both. Drawing is easier on me. I'm less aware of the rules and so I have less anxiety over it. Frank O'Hara wrote a good poem about the differences between the two disciplines called Why I am Not a Painter which I recommend.

Who tucked the world under
new sheets while we slept?
How loving,
even the cars looks peaceful
with their night caps on.
What can be said of such a perfect scene?
The cat peeking out hesitantly,
the little birds dusting their wings,
each know the slightest stroke
could spoil the canvas.
Wait here awhile before
you put your boots on
and go about restlessly
blackening the page.

◄ Write Out Loud at Bolton Socialist Club on Sunday

Soft, calm, all encompassing... and I am captured.
Thank you, Tom and sorry my congratulations for a well-deserved POTW are so late.

all thank you for the kind comments... and sorry for the delay... more snow and with it more flu this week!

Love this one.
More snow today.

Simple and subtle with some winning lines Tom. Captivating.

The cat peeking out hesitantly,
the little birds dusting their wings,
each know the slightest stroke
could spoil the canvas..

One of the better uses for prose in poetry - succinctly
capturing the delight of snowfall and its inevitable
aftermath.

Another ardent supporter here, as you know well.

Good to see a local-ish! chap getting some plaudits Tom. I think you have captured the "better to look at than be out in" atmosphere of this scene perfectly.