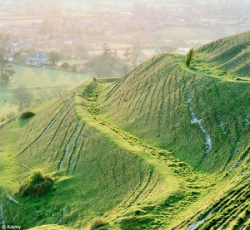 we walked the ancient path together

where ancestors had worn the land

into a waypoint to the barrow

under azure skies we stumbled on our way

across this land of Albion

the hops the wheat the barley

of the passing of souls

as we walked we talked of many things

the politics the music the literature

of the common tribe of man

we were friends treading a familiar trail

of the birch hedgerow

sometimes out of sight

but always within hearing

until you were not

I realised that you had taken

the opposite way around the mound

and you would be in shade and I in light

now there was the grave between us

and I would not see you

until we rejoined the path on the other side

the solstice sun settled behind a dark cloud

and I shivered for the loss

of its warm companionship

we had had the best of times

and as the autumn beckoned

winter would soon be upon me

I think Keith is right in that it has an almost mystical quality about it. Wonderfully put as usual Ian.
Love it
I am intrigued to know where the accompanying picture is of.
Nice one mate

Really excellent Ian. It has a long view and a gentle warmth to it - an allegory of the death of a close one I should say. Highly affecting stuff. Very distinctively written.

Thank you for this poem which will speak to many but in different ways. It has a mystical quality which gives hope in a gentle but clear way.