'Ye are many - they are few!' Jeremy Corbyn quotes Shelley at Glastonbury 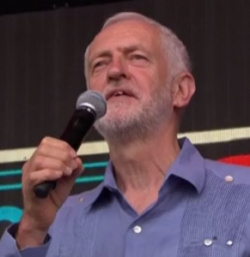 Labour leader Jeremy Corbyn enlisted the power of poetry when he delivered a rousing speech to thousands at Glastonbury music festival at the weekend. Concluding his speech on the main Pyramid stage by quoting Shelley, “one of my favourite poets”, he said: “I’m inspired by many poets, and by many people.”

The lines he quoted are these, from ‘The Masque of Anarchy’, written after the Peterloo Massacre in 1819: “Rise, like lions after slumber / In unvanquishable number! / Shake your chains to earth like dew / Which in sleep had fallen on you: / Ye are many - they are few!”

Jeremy Corbyn has previously said that he writes poems himself. Last year an anthology of poetry supporting the Labour leader was published.

◄ Spaced out on cosmic poetry in starry night at the Troubadour

The contents of the Bible - like other religious works -
are open to individual or collective interpretation as to meaning -
as has been witnessed for good and bad down the centuries. And that can apply when Christianity is
associated with socialism - defined in my dictionary as
"political and economic theory of social organisation and
control of commercial activities, policy or practice."
Any sweeping use of the word "poor" today is likely
to mislead since the contemporary condition seems far
removed from its meaning and obvious evidence of the
past. I've asked politicians for their interpretation of the
word today and have yet to receive an answer of any
sort. Hence the suspicion that it is being used for
a purpose other than its contemporary reality which
contrasts sharply with the emaciation and no shoes
/no hope of other days. That said, I'm all for the rich
paying more in tax or charity and would put the well-heeled names of show-biz and sport alongside
the corporate candidates for that purpose. But there is
a world beyond our shores and socialism seems the
least appealing of political systems for many who see
the concept to be far removed from the reality they
witness. My own memory - visiting Cold War Russia
(The USSR or The Union of Soviet Socialist Republics")
which had traffic lanes set aside for sole use of the
limos of the Politburo...Orwell's "some more equal than
others." Let us keep aiming for the best while striving
to improve the worst in the world in which we find ourselves.

I well recall Nigel Mansell winning Sports Personality of the Year in 1986 for finishing second in the Driver's Championship. We are easily pleased.

A fascinating variety of views about equality and the
state of the human condition that affects its existence -
or lack of it. As for Christianity getting involved - didn't
Christ himself observe that "the poor are always with us"
when seeking recognition of/support for his own situation from the demands of his followers during his brief stay?
The composite human condition is always vying with its
individual aspirations as history shows and we'd need to
start over from scratch to have any realistic chance of changing that blueprint.
As for any high-minded pious stance about ideals, I
doubt that a resort to vulgar abuse would be a persuasive factor in altering anything. The phrase
"easier said than done" comes to mind. Let us, instead, each in his or her own way try to contribute
to making this a better world by
action or example and go on our way knowing we made it just that
bit better for others.

Why did you ask the question if you're simply going to ignore the response?

As I said in my last post "best leave it there for me". I'm off back to my narrow life experiences and counting my money.

That labour force you mentioned managing may well have responded very differently had they had a more equal education, wage, nutrition, housing, healthcare, recourse to support in all areas, human rights in general, the opportunities to develop in ways that are not limited to creating wealth for the few, less worries about financial concerns, including housing, hunger, the ability to keep sufficiently warm and clean.

Do you consider yourself a Christian, by the way? If so, you must be aware that Jesus was a socialist, that the New Testament is a socialist text in the main.

I would urge you to read the book btw, rather than base your opinions on your own narrow life experience. It might give you a broader understanding of the subject. Then again, given your emphasis on creating more wealth for yourself, it might not.

equality is like organic farming - a preferred end point of reference to be aimed for. And although it might not in practise be achievable all of the time in every situation it should still be what we work towards continually as a society, together.

It seems the argument here is who would be better placed to forward that advance, fairly for all.

Status Quo voter mentality gives the green light to politicians to do as they wish - a situation that should never be encouraged imo.

Having been around witnessing life at all levels and in many
of its varieties I have yet to be convinced that there is
such a thing as "equality" in the human condition. How to
define it? Can it be defined in health or wealth? size or
lack of it? possessions or lack of them? advancement or
lack of it? rank or lack of it? social position or lack of it?
eminence or lack of it? creativity or lack of it? usefulness
or lack of it? The list is goes on and I propose that it defies
the simple/simplistic meaning inferred in various WOL posts.
The nearest in my own estimation is equality of opportunity,
from which so much else can emerge, plus the obvious "equality
before the law".
Even George Orwell recognised the impossibility of pinning
it down...with some "more equal than others".

By the time I've read the book Laura and its myriad statistics (and we all know what they can be made to say) I'll be a week older and no wiser.
I prefer to build my opinions on REAL life not someone else's stats.
So here's to the UK becoming more like Russia or N Korea. You'll be an awful lot more equal but bugger all better off!
Best leave it there for me, my blue pants are beginning to show.

You first Graham. I'm interested, as mentioned, to hear what your opinion is based on. Besides, I've already offered a reading recommendation that will answer your question.

Please describe what you think true equality looks like Laura.

You don’t have to have been born with a silver spoon in your mouth to be a Tory, Graham. Where do you think Robert Tressell got his idea from? And given that we have never actually had true equality in our country, I’d be interested to hear what your opinion is based on.

Laura, far from missing the point, the point is that whatever macro decisions/policies/aspirations/treaties/laws etc are aspired to or even put into place, it is at the grass roots level that they are tested and succeed or fail.

I am a son of shoe factory workers (who earned far less than train drivers/miners/car workers) so did not grow up with a silver spoon in my gob.

JC is all about control, just on a different level to TM that's all. I'm sorry you can't see that.

Missing the point somewhat there Graham. When socialists speak of equality, we're looking at a much bigger picture than simple small differences between working people. We're looking at vast financial, social, educational, physical and many other inequalities. You're closing down a debate that you only have a tiny amount of knowledge of, clearly.

If you can get hold of a copy, I would recommend reading The Spirit Level - Why More Equal Societies Almost Always Do Better, by Kate Pickett and Richard Wilkinson. It'll give you a better idea of what we mean by it.

As for your last sentence - all art forms are subjective, and given that, there is room for us all. Not only that, it is essential that there are as many diverse voices as possible in order to reach as many diverse ears as possible, and to satisfy the inner need for creativity that human beings have.

It's a wonderful idyllic notion, peace everywhere, everyone of us equal etc, fair shares for all.

For many years I had in excess of 250 people working for me and it never ceased to amaze me how diverse those people were. Some worked their socks off, some were feckless, some turned up in wind rain and snow, some turned over in bed if it was only drizzling, some were great colleagues in a team, some were always in dispute with others.

It's a wonderful thought JC but I'm afraid most people in the country know its unachievable domestically let alone globally and quoting the fancy of poets is all very well and on message but as poets we all know it's easy to write something but harder to turn it into a culture for all.

I've added a bit more to this story today, reflecting Jeremy Corbyn's comments about inspiring children. Thanks, Laura - and to Winston Plowes on Faceboook - for alerting me to this. Important stuff. Read more at http://www.nme.com/festivals/jeremy-corbyn-glastonbury-2017-speech-full-2093107#yrcvp6Q6tTpZW5Pm.99

He is the pinnacle of all Charmers . But will he won't he . Does He really care . Wendy

Well, he had me welling right up - brilliant speech, with all that emphasis on the arts (poetry mentioned at least 5 times) and anti isms, all for an equal society. Never thought I would actually hear it being said out loud by a Labour politician ever again, and it does my heart good.

Just a thought, if Jeremy really wanted to be taken seriously at Glasto he should have formed a band.

What name though? I'll kick you all off

As new profiles meeter and greeter I'll let you all know when Jeremy joins WOL!

I'm more than disappointed that Theresa May hasn't done Glasto. She could at least have introduced Radiohead..

So a political leader quotes Shelley on stage to thousands of people and WOL lines up to sneer at it.

You've got to love 'poets'.

The survivors of the Grenfell Tower disaster would agree with your last sentiment wholeheartedly, MC.

Wasn't Corbyn's visit to Glastonbury on the national Armed
Forces Day when the latter event was marked in Liverpool?
By their deeds, you shall know them.