Spaced out on cosmic poetry in starry night at the Troubadour 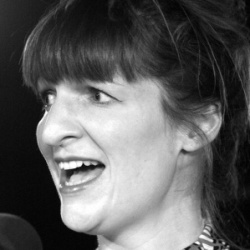 Out in space the numbers are mind-boggling – and so it proved at Monday’s reading at the Troubadour, too. I’m still trying to get my head round the fact that around 60 poets took to the basement stage to read single poems on the theme of “planets and Perseids, stars and satellites, orbits, galaxies and constellations”.

It’s a sign of the popularity of Coffee-House Poetry nights at the Troubadour, where the audiences regularly number over 100, and did on this occasion, too.  Planet Earth was one of the Troubadour’s regular themed poetry parties in which poets are invited to read, take part in a prize quiz, and there is an award for the best poem at the end of the night.

There were powerful poems about specific wonders, such as Tara Siddall’s - pictured above - on the Rosetta mission to land on a comet, and David Loffman’s on the Cassini spacecraft voyage to Saturn. Loffman compared an Arctic spring on Saturn, and its “gaseous vermilion stormclouds … blown into the crown of an enormous hurricane flower-head”, with the “fragile engorged forests” of a gentler spring back on Earth.

There were many more poems closer to home, employing the sun and moon as metaphors, or including extra-terrestrial references within poems that were on other subjects.  Often it was individual lines that caught the breath, such as Elaine Baker’s “the chilled moon, the spilled sun, the Earth in balance” in ‘Harvesting’; the painter in Robin Houghton’s ‘Starry Night’ “flinging colour at galaxies”; and Richard Ormerod’s startling image of the “dead old Earth” spilling open “like a broken bread roll” at the end of its life in a touching poem about his wife, ‘Planet You’.

Or these … Gillie Robic’s arresting “that day on the asteroid” opening line;  Susanna Hart’s “the day before the day he died, men landed on the moon”; and Paul McLoughlin’s – “I’m no scientist, and I’m not averse to metaphor … does every near-miss mean someone intended to collide?”

Rishi Dastidar’s ‘Cheer leader’ poem about the sun – “what’s a cheer leader to do, when she has to get everyone up in the morning?” – was filmed earlier in the day for a separate project, he revealed. There was John Godfrey’s poem about the number of stars to be seen in rural Michigan – “more stars than I’ve ever seen at once are splashed across the sky by Jackson Pollock” - and ‘The Dark Dark’, “the moon in hiding, not a star in sight”, by Michael Harris. 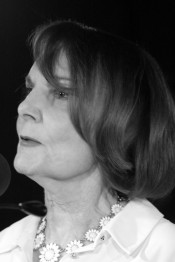 Robyn Bolam was the secret judge who made the tough call and picked Susan Utting’s poignant ‘Wanting the Moon’, about her mother, as the poem of the night. Susan is pictured right. Coffee-House Poetry’s organiser, Anne-Marie Fyfe, observed afterwards that the quality of Monday’s poems proved that space was “a rich, wide-ranging and encompassing theme – and metaphor”.

There was also the fun of the extra-terrestrial prize poetry quiz, devised as ever by Anne-Marie’s right-hand man, Cahal Dallat. Some of us learned that Stanley Kubrick wrote the script for 2001 and his other movies upstairs at the Troubadour; and Moondance, Space Oddity, Venus in Blue Jeans and Life on Mars featured in the music round, along with the 2001 and Star Wars themes, and Holst’s Planets.

Many of the poets taking part have also been involved in the regular workshops run at the Troubadour, with Monday night marking the culmination of 20 years of Coffee-House Poetry. It also organises the £2,000 Troubadour international poetry prize, to be judged this year by Imtiaz Dharker and Michael Symmons Roberts. The deadline is 16 October.

'Ye are many - they are few!' Jeremy Corbyn quotes Shelley at Glastonbury ►

Review » What I Heard on the Last Cassette Player in the World: Ben Ray, Indigo Dreams