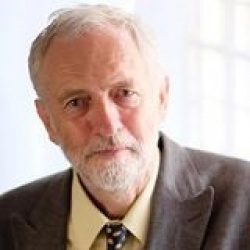 The Labour party leadership contender, Jeremy Corbyn, has revealed that he has been writing poetry on the train during his leadership campaign. Corbyn, who said he also is an abstract painter, made the remarks when launching his plans to reverse government cuts in arts funding. The popularity of leftwinger Corbyn’s candidacy in the Labour leadership battle has been such that some members of other political parties have been trying to vote for him as well.  “I do write quite a bit of poetry myself,” he said, adding that he had found time to write some verse while travelling on the train during the leadership campaign. The MP for Islington North confirmed that he would not be publishing any of his works. In a speech in Dalston, north-east London, Corbyn said that he wanted Labour to promote art for all, and that there was a novel, poem and painting in everyone. He proposed reversing government cuts in arts funding, ringfencing cash given to local councils to promote culture, and asking developers to contribute cash for public art.

Voting is under way in the Labour leadership contest, with the result due to be announced at a special conference on 12 September.

◄ Celebrating the Horovitz poetry family and the Slad valley

As someone who often writes poems on trains, I found Jeremy Corbyn's approach to arts funding to be admirable.

People from other parties vote for the bearded Messiah because he is an unelectable Marxist relic from the 70s.