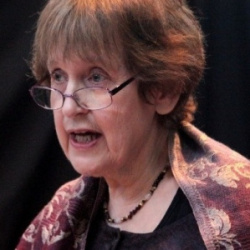 People should do some work in the “real world” before embarking on a career in poetry. That is the advice of Wendy Cope, who was a primary school teacher and also worked for the Inner London Eduction Authority magazine Contact, before the success of her debut collection Making Cocoa for Kinglsey Amis in the 1980s.

She told an audience at the Landmark Stories festival in Teddington on Sunday: “I think there are a few too many poets these days who come straight out of universities, and then go on creative writing courses. I think it’s a very good thing for a published poet to have done a job in the real world.”

During a Q&A session following her reading to a packed and appreciative audience, she explained that she began writing poems “when I was my late 20s. I just decided I felt like writing some poems. I wasn’t really expecting anything to come of it.” Cope also said that she generally wrote “in my study at home, sitting in an armchair with a hardback notebook on my knee … I’ve also written poems in hotel rooms, and made up poems in trains, although it’s difficult to write there as it’s too bumpy.” She does sometimes employ a rhyming dictionary, “and I refuse to be ashamed of that. I don’t think it’s cheating.”

Referring to the gentle mockery in her poem ‘A Policeman’s Lot’ – “It’s not the sort of beat a chap would choose … / Patrolling the unconscious of Ted Hughes” - she said: “He was very good-natured about it – he sent me a very jolly postcard. I mean, it doesn’t say anything bad about him.” Favourite poets? “I’m very keen these days on John Clare,” while living poets she admired include Fleur Adcock, Hugo Williams, and, of course, Lachlan Mackinnnon, her husband and fellow poet, who accompanied her to the reading in south-west London from their home in Ely, Cambridgeshire.

Wendy Cope began her reading with a number of new, unpublished poems, including ‘At 70’ (“Of fitness and vitality I am not the epitome”), “Evidence’ (“What’s the use of poetry, you ask. Well, here’s a start. / It’s anecdotal evidence about the human heart”), and ‘Calculations’, a love poem which she introduced as “the story of my life in arithmetic”. She has firm views on a number of subjects, including the ways funerals are conducted. Briskly is the preferred Cope way:

Remember that this was how I always reacted

When I felt that anybody’s speech, sermon or poetry reading

was becoming too protracted.

Yes, I was impatient and intolerant, and not always polite

And if there aren’t many people at my funeral, it will

Another poem, ‘He Tells Her’, had recently gone viral, because people thought it was about Donald Trump”, although Cope wrote it in 1994:  “He tells her that the Earth is flat - / He knows the facts, and that is that.” She is no follower of poetic fashion, preferring to subvert it whenever possible. ‘An Attempt at Unrhymed Verse’ concludes: “Writing verse is so much fun, / Cheering as the summer weather, / Makes you feel alert and bright, / ‘Specially when you get it more or less the way you want it.”

Her reading included favourites such as ‘Flowers,’ ‘Bloody Men’, including the test questions about it,  and two romantic poems written at different times in her life, ‘Valentine’ (“My heart has made its mind up /and I’m afraid it’s you”), and ‘Another Valentine’ (“Our love is old and sure, not new and frantic, / You know I’m yours and I know you are mine, / And saying that has made me feel romantic, / My dearest love, my darling valentine.”) Another romantic poem, ‘After The Lunch’, has, along with a couple of others, been put to music by Jools Holland.

Cope also namechecked Adele, wondering if her new poetry collection, due out next year – glad tidings for her many fans - should be titled 70, in the same way that the singer-songwriter titled her albums, 17, 21, and 25. “But perhaps it wouldn’t appeal to those under 70,” she said.

Wendy Cope’s appearance at the Landmark arts centre, a glorious way of putting to use a former church, was billed as Afternoon Tea with Wendy Cope. It did indeed include tea or coffee – but not cocoa – during the interval, plus an enormous slab of cake, which even I could barely finish. The cuppa with Wendy Cope marked the end of an eclectic four days of poetry, spoken word, comedy, storytelling, music and art workshops for children at the Landmark Stories festival, curated by poet Alison Hill.