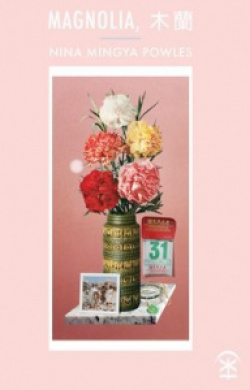 Nina Mingya Powles is a prize-winning poet and zinemaker from Aotearoa in New Zealand, who is currently living in London. She is the author of several poetry pamphlet collections and the founding editor of Bitter Melon, a risograph press that publishes limited-edition poetry pamphlets by Asian writers. Magnolia is her first full-length collection, and has recently been shortlisted for the £10,000 #RSLOndaatje prize, for works of fiction, non-fiction or poetry that best evoke the spirit of a place.

The collection came about as a result of Powles being awarded two scholarships to enable her to live and study in Shanghai where most of the poems were written. Magnolia is, among other things, Powles’ homage to Shanghai, an exploration of her mixed Malaysian-Chinese heritage and her ties to New Zealand.

I was very struck by the similarities that Magnolia bears to Jennifer Wong’s collection, Letters Home which I reviewed recently for Write Out Loud. Both poets make use of film material and other visual media as a source for inspiration and both write poems inspired by the film In the Mood for Love. Both Wong and Powles write eloquently about the experience of being in two different places at once. In the case of Powles, this is New Zealand and Shanghai. Both use food as a metaphor for cultural identity. Powles has written a food memoir entitled Tiny Moons: A Year of Eating in Shanghai (The Emma Press, 2020). They also share a fascination with language which they employ as another metaphor for identity and belonging. In ‘Mixed girl’s Hakka phrasebook’ Powles pays homage to the Hakka language, a variety of Chinese spoken by the Hakka people throughout Southern China, Taiwan, Hong Kong and Macau. The Chinese characters for Hakka translate as ‘guest families’. In the poem, Powles balances the few phrases that she does know against the many that she doesn’t, signifying, perhaps, the extent to which this endangered language is gradually disappearing from common parlance.

A number of other poems such as ‘Mother Tongue,’ ‘Dialectal’ and ‘Alternate words for mixed race’ also reference language as a means of expressing a particular subject. In the extended sequence, ‘Field Notes on a Downpour’, Chinese characters act as the springboard for the main text. In the penultimate prose poem, Powles states that “certain languages contain more kinds of rain than others, and I have eaten them all.”

In ‘Two portraits of home’ Powles gives two colour pictures in words of what she regards as ‘home’. Subtle clues in the text reveal that the first portrait, with its references to the Bay of Sounds and kōwhai trees, is New Zealand and the second, with its references to mooncake wrappers and lantern festivals, is Shanghai. Every line contains a colour whose description is enhanced by the use of unusual adjectival add-ons (“kowhai-petal yellow,” “fantail-feather cream,” “electric billboard blue,” etc.) using Werner’s ‘Nomenclature of Colours (1814) as a catalyst for inspiration.

Powles draws on colour for another of her poems entitled ‘Colour fragments’. These fragments take the form of prose poems which are sparked by the sub-titles that introduce them. Here is the opening fragment in full:

On our way home from the botanic gardens, we dreamt of building a museum of all the colours in the world, all the pigments       and what they’re made of, colours in their purest forms; a museum of memories stripped down. The colour of them on the inside. The tints and shades of different feelings, and the objects that colour them.

In ‘Happy Holiday’ Powles explores a five-foot square abstract painting on canvas by the Canadian-American artist Agnes Martin using words drawn from comments made on the painting by the art historian Briony Fer and the artist herself. In another poem, ‘Origin Myths,’ she draws on the work of the multi-disciplinary artist Lisa Reihana who retrieved from imperialist narratives the hidden truths and suppressed voices of the colonised peoples of New Zealand.

Throughout the collection, Powles explores the many facets of the word ‘magnolia’. Magnolias symbolise dignity and nobility. In ancient China they were thought to be the perfect symbols of womanly beauty and gentleness. In her opening poem ‘Girl Warrior, or: watching Mulan (1998) in Chinese with English subtitles’ Powles not only references a Chinese mythological ballad that has been made into an animated film, but also plays on the name ‘Mulan’ which means ‘magnolia’. Magnolias make their return in the closing poem, ‘Magnolia, jade orchid, she-wolf’ which quotes lines from Chinese Cinderella by Adeline Yen Mah. Writing of the magnolias, Powles says:

Back home in spring, they are everywhere, flaming in the corners of my vision. Leafless, blushing, open-mouthed by the sea. Doused in pink, tongues out.

The magnolia is the official flower of the city of Shanghai and it is central to this collection in which Powles succeeds in bringing together a substantial body of imaginative work for our enjoyment, intelligence and delight. Fully recommended.