After Trump: an artistic and poetic reminder of America's Great Migration

by Julian Jordon in Washington 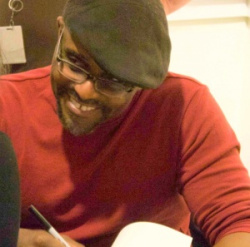 A week after the shock of America’s supposed liberal values being trumped by bigly bigotry, the country’s apparently ingrained red neck having been thus exposed, I had the privilege of attending an extraordinarily apposite evening at Washington’s The Phillips Collection, with poets Robin Coste Lewis and Tyehimba Jess responding to the gallery’s exhibition: People on The Move: Beauty And Struggle in Jacob Lawrence's Migration Series.

When the first world war deprived northern US industrialists of workers, they invited southern black folks to abandon their jobs, such as they were, and take the train (bus, boat, horse and cart) north for better pay, better housing and better discrimination.

This Great Migration saw, by the end of 1919, one million African Americans leave the south for the north, and more in the interwar period. The conflict had halted the influx of European migrant labour just when the war effort needed increased production. Ads were placed in black newspapers and recruiters travelled south extolling the opportunities: in 1916, they could get three times what they earned down south, where their daily lives were subject to segregation, murderous violence and, often, grinding poverty. So, economic migrants or refugees, in today’s parlance?

Tyehimba Jess, pictured above, read us a letter from his book, Olio. Here’s how it starts:

It’s been quite a while since my last letter. I thank you for your patience. I am not deaf for your request for me to return. Believe me, I want to. I know the family needs me. But you must know that for me return to Cairo is a chance I can’t let myself take. I’ve seen too much of what Cairo means to me when I saw our cousin hanging from the lampposts, when I smelled the smoke they made of his flesh. I’ve chosen my Exodus, and looking back would burn me down to nothing but salt.

Many African Americans created their own cities within cities, fostering their own culture, including the Harlem Renaissance artistic movement, whence emerged Jacob Lawrence, one of the most celebrated African American artists of the 20th century, himself a southern migrant. He was 23 when he finished his astonishing 60-panel work depicting that migration’s story, becoming an overnight sensation in the US art world. The Phillips Collection gallery bought the odd-numbered panels, the rest going to New York’s Museum of Modern Art (MoMa), keeping the north-to-south, start-to-finish narrative intact for both galleries. The series was reunited for this exhibition, which you can view online and read the paintings’ captions relating the story.

It was to this already powerful exhibition the two poets had been asked to respond, in an event organised with the Folger Shakespeare Library, but this was no ordinary reading.  Each came to it with their individual projects in the form of their latest book. You might think that sounds cynical: just trying to sell their latest book. You’d be wrong. Whatever the financial gain from their respective publications it couldn’t possibly reward the effort, the painstaking, comprehensive research, and inspired writing each must have deployed in its production. Here were two poets passionate about presenting their truths, representing the voices of those who could no longer speak for themselves. What emerged was breathtaking, the reading, the artwork, and the political context fusing to create an electrifying whole that cannot have left anyone in that audience unchanged with this poetry of truth and witness. 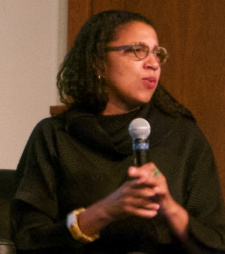 Robin Coste Lewis is a corrective to the south-to-north orientation, her family being part of the alternative western migration to California, from New Orleans in their case. She compared Lawrence’s painting style to poetry, in the economy with which he depicted the narrative. For her, the artist’s work was the first time African Americans had seen pictures of black people that weren’t cotton pickers, or someone hanged in a tree.

As a child, she’d wondered why art lessons rarely used pictures of black people. Her book, Voyage of the Sable Venus, is an expedition into western art’s historical treatment of the black female figure, the title taken from Stothard’s painting the ‘Sable Venus’, currently in London’s Greenwich Maritime Museum. That picture, inspired by Botticelli’s  'The Birth of Venus', presents an African woman standing on a half-shell, attended by cherubs, being towed by dolphins to the Americas, watched by Triton carrying the Union flag, blithely betraying Britain’s part in that shameful enterprise.

Tyehimba’s reading was as raw as it was polished, as sophisticated in its manipulation of language, as it seemed faithful to the vernacular. His extraordinary book, Olio (a stew or variety act), from which he read, though not strictly the subject of this review, cannot be separated from it. Part fact, part fiction, it astonishes in its breadth of genre (sonnet, song, memoir, narrative) and creative surprises: poems about conjoined twins turned into a freak act, with separate verses divided in parallel on the page, joined at certain lines; fold-out pages, including one listing statistics on lynchings per 100,000 blacks by state, a list dotted in and around the poems of all the black churches burned down including Flood Christian Church, Ferguson, MO 2014, which you might recall.

Developing his craft initially via slam and performance poetry, he has produced a fascinating publication that has to be read on the page and out loud, that has to be engaged with, interrogated, manipulated, played with  - cut up and glued back together? – while also presenting authentic voices for the oft-humiliated black entertainers who were part of “minstrelisation” – his term. It is an outstanding achievement. In spite of the range of genres, his powers as a poet are writ large throughout, even though he describes himself as a storyteller.

And they are all three – Lawrence, Coste Lewis and Jess - tellers of stories that must to be told; as is the team that curated this session, the Folger’s Teri Cross Davis and Phillips exhibition curator Elsa Smithgall. Matching this exhibition with these poets at this point in the development of their oeuvre, was a stroke of genius, reminding us that the evening, if ostensibly narrating migration was also about “depiction”: of black people, of minorities more generally, and of migrants in the west’s increasingly dangerous political contexts.

As the caption to Lawrence’s final painting in the series reminds us: … the migrants kept coming. And as the US election result suggests, bigotry and xenophobia did not end with “emancipation”, or with migrants’ arrival at their “refuge” destination.

People on The Move: Beauty And Struggle in Jacob Lawrence's Migration Series runs until 8 January 2017, and there is a marvellous interactive website on the exhibition and on migration more generally.

The event was organised by Teri Cross Davis, director of the OB Hardison series of poetry readings for the Folger Shakespeare Library, in association with The Phillips Collection, the first modern art museum in the US, with its Van Gogh, Renoir’s the Boating Party Luncheon, its Braques, Matisse, Paul Klee, Rothko, Pissaro and a work by the Lake District’s forgotten second world war artist Kurt Schwitters, a 1930s refugee from Nazi Germany.

Louise Fazackerley joins The Verb discussion on the poetry of violence ►

The whole thing: the context is different, and they were particularly good because what they presented was the culmination of a huge amount of research and, in Tyehimba's case, some very clever ideas and a lot of skill. I suppose it is the equivalent to anyone who has something important to say, who is qualified - by background or experience - to say it, who has the capacity to write well, and the skill to make it work orally.
In fact, all Tyehimba did was to speak about his work on the book, and then read that letter. It was enough, although as I say above, the book cannot really be divorced from the reading. And, of course, the whole thing was read against the background of a very special series of paintings and in a particularly significant political context: Mein Trumpf.

Did you feel the performers you saw at the exhibition were doing something that was categorically different than what we are accustomed to, or were they just particularly good at writing and performance?