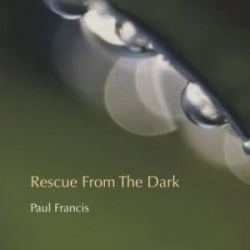 Paul Francis is a retired teacher who has published three previous main poetry collections; he has also won three national poetry competitions, and been placed second or third in three others, including runner-up in last year’s Write Out Loud Beyond the Storm competition.

Many of the poems in Rescue From The Dark are inspired by reports from the poet’s newspaper of choice, the Guardian, he tells us in the notes at the back of the book. A number of them are also sonnets that Francis wrote last year. ‘Rescue’ was prompted by the photograph of black counter-protesters rescuing a far-right demonstrator during unrest in London:

The man they save is racist, white but this

is no self-sacrifice. It’s not for him.

We did it for our kids. We leave him there

he dies, and we know what the judge will say.

about what happened first. They think ahead

For others; they take action, as a team.

Police do that, and George Floyd’s still alive.

By coincidence, that picture appeared again in the Guardian on the day I am writing this, winning Dylan Martineau of Reuters a UK media award as news photographer of the year.

‘Betrayal’ is a compassionate poem about Covid increasing the pressure on health workers to an almost unbearable extent. ‘Short-term Investment’, which came second in our Beyond the Storm poetry competition, is about a doctor who is not “home-grown”:

When my wife sees me off I see the fear

that’s written on her face. If I get ill?

If I transmit infection to our son?

And if I die, who’ll get the mortgage paid?

Will they be locked up? Shoved on to a plane?

My visa is extended for a year.

So, just enough to see this crisis through

and then we’re back to normal, when I’m shed

‘Clocking Off’ is an ironic, savage title for a poem about an office cleaner in his sixties who came to the UK from Guinea Bissau. He feels ill but can’t afford to stop working:

He’ll keep on working till he drops.

You never get if you don’t ask

but no, they won’t give him a mask.

Five days, and all his worries cease.

Paul Francis has had close experience of the Windrush scandal, writing ‘The Ballad of Paulette Wilson’ in memory of, as he says, “one of the first cases to be reported, in articles by Amelia Gentleman, who had been alerted by the Wolverhampton Refugee and Migrant Centre. I’m proud of have been one of the local poets involved in the benefit event to which the poem refers. Paulette has died, but Windrush remains a scandal, as does the deliberate failure to learn its lessons.” His poem ends:

She was bright and energetic, but they tore her life apart

She gets a Covid funeral, just twenty folk inside

but there’s hundreds in the car park, they’re applauding her with pride.

When governments abuse their power, we have to set them right

and she’s the Windrush champion who has taught us how to fight.

There is quiet anger at the culture of spending cuts and cutting of corners that led to the continuing scandal of Grenfell Tower and dangerous cladding in ‘Testimony’. That same culture is examined in more detail in ‘Fit for Purpose?’. What to do about it? In ‘Man to Man’ the poet urges his son to get involved in politics:

in aging men with empty words.

You didn’t see them buy the right to rule,

environment. They will not stop

until somebody stops them. Yes, that’s you.

And yes, as you might have guessed, Paul Francis is an unashamed Remainer. ‘Dover Beach, June 2016’ was written a week before the referendum result, but he already fears what might be voted in by “ignorant armies”. ‘Leavers’, on the other hand, is written a few years after the event, reaching the verdict that they “were just digits on a database, /not taking back control but left behind. / Their votes were cancelled. They were double-crossed.”

Paul Francis has employed skill, empathy and imagination in channelling his anger at the newspaper reports he reads daily into poetry of reason and resonance.

I don’t want to give the impression that this collection is uniformly political. A poem called ‘Mentor’ is about encouraging creativity in the young; and ‘Pick-me-up’, the final poem in the collection, celebrates the joy of a Fats Waller song. But the weight of the clear-sighted and humane poems in this collection does lead to the inevitable if dispiriting question – just what kind of country are we living in? And how did people vote for this?

'Betrayal' was my personal favourite from Beyond the Storm. I'm looking forward to getting and reading the book.