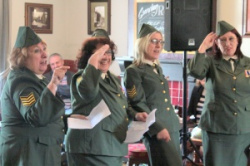 The annual Write Out Loud poetry jam at Marsden? That’s just another open mic, isn’t it? Well, no, actually. This is the fifth consecutive year I’ve attended the yearly shindig on the Sunday morning of Marsden jazz festival at The Railway pub, compered, as always, by Write Out Loud’s founder, Julian Jordon – and I reckon this year was the best. No reflection on the previous four that I’ve been to – but this time we had an angel, an alien, and four sisters in uniform, angelic voices in harmony, adding a taste of 1940s swing and the Andrews Sisters.

Angels from the off. As compere, Julian kicked off proceedings by invoking the spirit of the jazz festival and that great jazz-poem, Allen Ginsberg’s ‘Howl’, addressing the assembled crowd at The Railway as “you angelheaded hipsters”. We looked round at each other briefly, checking that he did indeed mean us. Of course he did.

There was laughter, some anger, a few tears – and more laughter. First up at the mic was linguistic gymnast David Lindsay, getting the audience in the best mood from the start as he worked his way through the vegetable rack with ‘Food for Thought’, and then supplied a seemingly inexhaustible catalogue of euphemisms for being ‘Brahms and Lizst’. 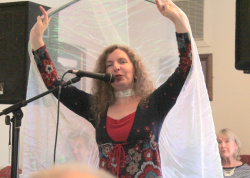 One or two poets heckled themselves, in a kind of open mic pre-emptive strike. Eddie Underwood appeared to lose his place while reading his long poem about the moonrakers of nearby Slaithwaite, just further along t’canal, and cried out: “Is there a doctor in the house?” David Makin revealed: “I received a lot of requests, but decided to ignore them, and turn up.” His no-nonsense poem addressed to Wordsworth spoke of daffodils that ”ponce about the greenery … the narcissistic futility of existence … we flutter and dance, which is really all there is to do”.  That mood of literary scepticism was pursued by David Ramsden: “Don’t think of Bennett, don’t think of Orton / Think of BSA, Triumph and Norton.”

We then entered the land of make-believe, a portent, perhaps, of the makeovers we would see before our very eyes in the second half. Stephanie Blythe told of the princess who fell out of love with a frog – “a true story” – while Keith Jenkinson related a poem about a witch called Heather: “Heather has a secret / that’s known only to the cat.” Freda Davis’ ‘My Dragon Husband’, who “hunts the swift, cold demons of the waterworld”,  once won Write Out Loud’s Poem of the Month accolade, the long-ago forerunner of our current Poem of the Week (great poems come thick and fast these days). Freda also showed her angry side, in a poem called ‘All The Rage’, about feminism in the late 1980s, which she said was inspired by ‘Howl’. Lynda Brooks’ sensual poetry about relationships changed the mood; one poem was dedicated to someone who had kept this particular poem with him. The revelation overwhelmed her for a moment. 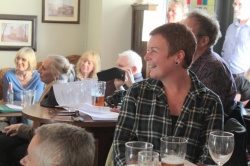 Paul Blackburn, who will always be remembered for the great part he played in the development and success of Write Out Loud, had fun with a text sent in error – “Do you mind? We’re playing with my emotions here” – and his barnstorming end to the first half had the audience literally howling.

Enjoyable contributions at the start of the second half  – sung in Sandra Littlewood’s case – from Rosie Wilkinson, Martin Elder, (who read his recent Poem of the Week, 'The black and the white'),  and Karen Jebbett did not really prepare us for the materialisation of Elizabeth Faitarone, pictured above, who unfurled the wings of an angel during her performance. Who was this mysterious person, where had she come from? From off the moors, or perhaps out of nearby Standedge tunnel? She was from Buenos Aires, it turned out. A very assured performer, she insisted on briefly halting her routine so that I could photograph her best side – and a few hours later posted an intriguing profile on Write Out Loud. 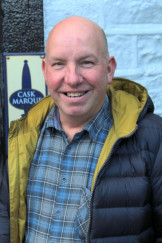 There was also one of those moments to treasure at any poetry jam – the triumphant debut of a first-timer at the mic, pictured left. Roger Daker’s poem about what he described as his second love, the Huddersfield Narrow Canal, its locks and its famous tunnel - “highest, steepest, longest … Standedge seems to take forever, till the day reappears … On to Manchester …”  - was assured and acclaimed by all at the Railway, and not just by his cheering supporters.

It was good to see and hear Nigel Astell and Andy N, both stalwarts of Write Out Loud Stockport, who had made the trip across the Pennines; and Jacky Pemberton, whose poignant ‘Catch a Falling Star’ mentions Perry Como, of course, and also lists the sunset at Aldeburgh beach as one of her favourite things.

It was my turn at the mic. I knew they wouldn’t be impressed, but I was bursting to tell them anyway. I had just met that famous son of Marsden, Simon Armitage, the day before at Winchester poetry festival, and he had told me that the Railway – this room in which we were sat - had once been his local. Think of that! There might be a blue plaque outside the pub one day, a sobering moment for the Rail Ale Trailers. I was right; they weren’t impressed. The silence was deafening, the one tumbleweed moment of the whole poetry jam. Moving swiftly on, I read a poem called ‘Jazz Is’ by my poetry amigo down south, Ray Pool, who is a prolific and popular blogger on Write Out Loud. It ends: “Jazz has no truck with fools or kings / It’s simply just one of those crazy things.” It went down well. And I read one of my own, about the late, great Ian Dury. That also went down well, I think. 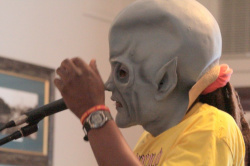 A man who always goes down a storm at the poetry jam was this year’s penultimate act. Felix Owusu-Kwarteng is a favourite of the Railway’s main man Liam, who always calls out for his sinister ‘Barry the Bacteria’. This year Felix was determined to try out something different, and for one poem donned an alien mask, although he found it a bit problematic to wear it and recite his poetry at the same time. Was it a comment on Brexit? No matter; the shock of the new is everything.

Then came the crowning moment of the poetry jam. Isobel Malinowski and Cate Greenlees have regularly supported the annual bash at the Railway, but this year brought along their sisters Eleanor Nelson and Yolande Clough to form a four-part harmony, Andrews Sisters-style group, complete with uniforms. They premiered the format at Write Out Loud Wigan last Christmas, and their pleasure in getting a chance to reprise that performance was a joy to see.

They were billed as the Wiganaires, but as the publicity surrounding them grows, have decided to call themselves the Tudor Roses. Their harmonies were marvellous, with lyrics – “Pardon me, boy, is that a poem in your pocket?”… “Don’t go down to the Railway Inn with anyone else but me”  – especially tailored for the occasion. Thank you, four fabulous sisters, Isobel, Cate, Eleanor and Yolande. A brilliantly jazzy way to round off the poetry jam. Book them for next year – and every year, say I!

◄ Happy to be alive, grateful to the NHS: recovering Michael Rosen talks about Covid

Well Julian and Greg - I'm pleased to advise that your reposting of this article has prompted us sisters to get together again and think about singing. In fact I'm in the process of penning our next masterpiece!

Health, wealth and Covid permitting, we'll see you again at Marsden in 2021!

Oh thank you Julian - I had no idea we were on youtube! LOL listening to it again, I can see there was still room for some improvement but we put it together without the hours and hours of practice I imagine the Andrews Sisters had...

Happy Days... I hope you're back up and running for next year - it's such a lovely place and venue. x

links for the Wiganaires/Tudor Roses

Tomorrow would have been the day, and good weather it would have been too. I have put it on the Marsden Facebook page where Kath Shackleton had mentioned missing the festival too: https://www.facebook.com/groups/marsdenvillage/permalink/10157369557416128/

It certainly has been another of our great successes over the years, average attendance around 60-80 folks rammed into the pub. Best quote ever: I don’t’ like poetry, but that was fantastic.

Last year was a weird one, using the marquee outside the music shop, with a delay to my arrival caused by Diane and others announcing the smell of gas outside my house. The 'gas board' - whatever they are now called - declaring the all-clear, subsequently discovering – three days later – there really was a serious leak, with 60 or so people not 40 yards away. That would have been the year it went with a bang.

I can't stand to look at the pictures, evoking as they do a time, so long, long ago when we could meet together, recite together, get tight together.Will it ever be the same again? Could Trump's bleach cure save poetry performances? Or is it just fake news?

Bliss was it in that dawn to be alive, and to be sharing our poetry, very heaven.

Glad you spotted this again, Isobel! I rarely re-read my pieces with any particular pleasure - but I did this one. Probably the best poetry jam that I can recall.

Greg that was such a brilliant day and such good fun! I love it when a poetry venue has a good mix of serious and not so serious...😁

PS I'd forgotten just how wonderful those Wiganaire/Tudor Roses harmonies were! Happy days!

What a brilliant event Julian! The best I've ever been to in terms of quality acts. Humour combined with intelligent,subtle, social commentary, scattered here and there with beautiful use of language.

I loved every act. Thank you Greg for a wonderful review. You did a great job but you'd have to have been there to really appreciate it!

you can see short clips of the Wiganaires singing here:
https://www.youtube.com/watch?v=vr7GJiL_mec