Poetry at the Parsonage, Haworth, 2016 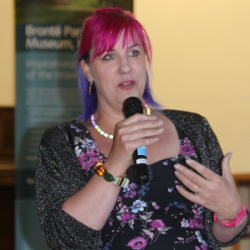 A new kind of poetry festival – certainly one that I haven’t seen before – was born at the weekend, in the “creative hotspot” of the Bronte Parsonage in Haworth, West Yorkshire.

In the same setting where Charlotte, Emily, Anne and Branwell had produced poems and stories on tiny pieces of paper when they were young, more than 100 poets, nearly all of them from Yorkshire, took part in Poetry at the Parsonage, a free event (donations welcome!). They included some big names, but also scores from some of the thriving poetry groups that throng the county. 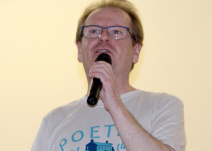 The festival was the brainchild of Matthew Withey, of the Bronte Society, who had been looking for a new way of celebrating Charlotte Bronte’s bicentenary, but also owed a great deal to the curating prowess of Mark Connors, pictured left, regular organiser of Word Club in Leeds, who assembled a harmonious and quality mix of page and performance poets that spanned the generations.

Mark proclaimed at the start of the event how proud he was to have so many regular open mic nights and poetry groups taking part in the festival. They included Harrogate’s Poems, Prose & Pints; Otley Word Feast Press; Word Space from Horsforth in Leeds; the collaborative project  Leads to Leeds; Mark’s own Word Club, which meets at the Chemic Tavern in Leeds; Pudsey’s Poetry and a Pint; Otley Poets, who meet at Korks wine bar; Ilkley Young Writers; York Stanza; Shindig from Hebden Bridge; Bradford’s Beehive Poets; the University of Sheffield Poetry Society; York Spoken Word’s Exhibitionists; Queensbury Ladies … you get the picture. 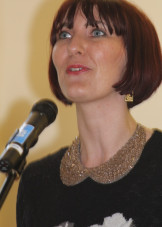 So what of the poetry? There were certainly poems about, and by the Brontes - of which, more later. There were also poems celebrating Yorkshire, and more widely, the north, such as Kate Fox’s campaign to hear the national news read by someone with a northern accent. She was careful to tread a fine line between Remain and Leave - but thought, correctly, I’m sure, that voters of all persuasions should rally behind the idea of Michael Gove as a “poison drip”. 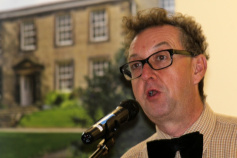 There were a number of moving and humane poems against the racist backlash that has taken place in some quarters since the Brexit vote. I was maybe a bit taken aback to find that tolerance of “foreigners” did not extend to “southern jessies” in an angry poem by the multi-talented poet, performer and educator Winston Plowes, pictured left, about the appropriation by the V&A in London of photographs from the National Media Museum in Bradford. Justified anger, of course, and it was an issue that was alluded to by Kate Fox, as well.

It was Winston that described Haworth as “this creative hotspot” – and how inspiring it was to be hearing poetry in The Old School Room, or Charlotte’s Stage, near the parsonage, where the Bronte sisters once taught. Among the many Bronte-themed poems, Kristina Diprose, pictured above, gave us her brooding sequence of six, which included these lines: “Equanimity is our religion … though we walk with ghosts … paper is precious, so we shrink to fit it .. claim a man has written it”. Carole Bromley’s Bronte poems included one called ‘Charlotte Bronte Gets a Laptop’, with everyday annoyances like “Branwell going cold turkey”, and “Emily’s infuriating cough”. Lorna Faye Dunsire, pictured right, read out poems written by the Brontes themselves, including these compassionate words written by Emily about Branwell: “My sad heart must ever mourn thy ruined hopes.” 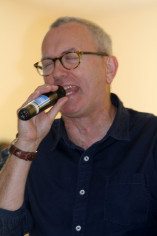 Among the performance poets, a special mention should go to Wakefield’s Jimmy Andrex, pictured left, a northern powerhouse whose moving poems included ‘Foreigners’, with this refrain: “What’s so great about us, and not them?” A poem that also pays tribute to Australian singing star Frank Ifield for teaching us how to yodel. Anger with a smile on the face. Credit also to young perfomer Toria Garbutt’s tales of the seamier side of life in places like  Knottingley. No drystone walls to celebrate in these former mining towns left to stew, but plenty to document. 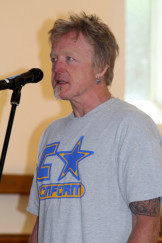 Steve Pottinger, pictured right, might arguably be described as a foreigner in Haworth, in that he comes from the West Midlands. But Steve has gigged widely in Yorkshire – indeed, all over the country – and is well loved in these parts. He was introduced by Mark Connors as “political, but he leaves you with a positive feeling”. More anger with a smile on the face. His poems often contain a kind of magical realism, as in the wonders of the last train from Birmingham to Wolverhampton on a Saturday night, and the idea of Donald Trump and Katie Hopkins finding inner peace together. It would be a sad loss to the team at Write Out Loud, who value his energy and also regard him as a wise counsel and calming influence – but why not? Steve Pottinger for PM! Another foreigner - me, in fact - got the chance to read, to a small but patient audience on Emily’s Stage, across the road in the Baptist church, late on Sunday afternoon. Thanks for the opportunity, organisers; and thanks to compere Ralph Dartford for bigging me up, and for all the good work he does with A Firm of Poets. 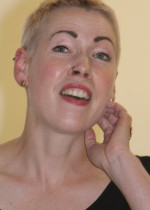 Other personal highlights? Peter Jordan, a member of Poetry, Prose & Pints; the stylish Robert Eunson, evoking Kerouac and Ginsberg in New York; the Leads to Leeds collaborative project led by Helen Mort, pictured left, who with Alan Buckley rounded off Saturday night to great effect; Char March’s moving first world war poems; John Foggin, Gaia Holmes, Siobhan MacMahon; Matt Abbott and his Wakefield all-night pie shop (“I get a pie every time I do the poem”); Wendy Pratt’s evocations of Yorkshire landscape, including drystone walls; and meeting up again with wandering poet Joe Nodus. I arrived on Saturday morning in the midst of a sudden Pennine squall; and departed on a calm sunny Sunday evening, taking that heart-soaring road across the moors from Haworth to Hebden Bridge. God’s Own County? It’s still pretty close.

Thanks for the mention Greg. You were a highlight for me too. :)

Great article, Greg. If this festival happens next year – and I hope it does – I highly recommend it! Well-organised, inspiring, and thoroughly enjoyable. The organisers deserve a huge amount of respect for pulling it together.

I fear not, Carol. Sorry I missed you

Was it you Greg taking pics during my performance?

Cheers, Laura! It was hard work - and impossible - to see everything, but I gave it a good go!

Fantastic review Greg - wish I could have been there meself.